Magic center Wendell Carter Jr. is relieved that the injury he suffered on December 17 against Miami wasn’t worse, Khobi Price of the Orlando Sentinel writes. Carter exited the game in a wheelchair after experiencing leg pain, but an MRI revealed that he suffered a lower right leg muscle strain.

“I was just scared that it was going to be something that was going to take me a while to come back from,” Carter said. “To hear the news that it wasn’t as bad as I thought it was was good. They told me to take it day by day and continue to get treatment on it.”

Carter missed six days and returned this past Thursday against New Orleans. He played just under 30 minutes in the contest, recording 17 points, 12 rebounds and three blocks. He also registered a plus-11 net rating in the six-point loss.

8:13am: The Hawks have issued a press release confirming the signing of Barber and announcing that they’ve also signed guard Malik Ellison to a 10-day deal using a hardship exception.

7:28am: The Hawks will promote guard Cat Barber from their G League affiliate and sign him to a 10-day contract via a hardship exception, sources tell Shams Charania of The Athletic (Twitter link).

As we detailed on Friday, Atlanta was required to sign another replacement after having more players – Onyeka Okongwu and Wesley Iwundu – enter the health and safety protocols. The team had previously signed Lance Stephenson, Malcolm Hill, and Iwundu via hardship exceptions.

Barber, 27, will have an opportunity to make his NBA debut more than five years after he went undrafted out of NC State in 2016. Since then, he has played for a series of international and G League clubs, most recently joining Atlanta’s affiliate, the College Park Skyhawks. In 14 NBAGL games this season, he had averaged 13.4 PPG, 5.6 APG, and 4.1 RPG on .449/.387/.767 shooting in 26.4 minutes per contest.

While Atlanta’s roster has been hit hard by positive COVID-19 tests as of late, the team did get some good news on Saturday — big man Clint Capela has exited the protocols and will play in the Christmas Day game vs. the Knicks, reports ESPN’s Adrian Wojnarowski (via Twitter).

The Hawks still have eight players in the protocols, including Trae Young.

Wizards wing Kentavious Caldwell-Pope has entered the NBA’s health and safety protocols, tweets Shams Charania of The Athletic. Washington had been one of 10 teams that didn’t currently have any players in the protocols, but that’s no longer the case.

According to Wizards head coach Wes Unseld Jr., Caldwell-Pope returned a positive COVID-19 test on Monday evening (Twitter link via Chase Hughes of NBC Sports Washington). He’ll be sidelined for 10 days or until he can return consecutive negative tests at least 24 hours apart.

Here are a few more protocol-related updates from around the league:

Nets big man Blake Griffin has seen his role shrink with the impressive play of LaMarcus Aldridge, Brian Lewis of the New York Post writes. Griffin started last season and in Brooklyn’s first 18 games this year, but he was replaced by Aldridge against the Celtics on Wednesday.

In addition to losing his starting spot, Griffin also didn’t receive minutes off the bench. Head coach Steve Nash opted to play James Johnson and Paul Millsap instead, and the duo helped the Nets secure a 123-104 road victory.

“We just need to look at different things,” Nash said. “I think it picked up our pace. [Aldridge is] not the fastest guy on the floor, but we played with pace. We played with ideas. We weren’t stagnant. We moved the ball. I thought we defended well.

“Overall, the spirit was really good. That’s what we’ve been asking from this group is to have a great spirit and pick each other up and push for more, get better.”

A few months before he reached free agency earlier this year, Kelly Oubre strongly suggested that he wanted to be a starter, telling reporters, “I can offer a lot more than coming off the bench.” However, he has been willing to accept a bench role with the Hornets so far, having started just five of 13 games for the team to open the season. On Wednesday, his reserve role put him in position for a historic performance — his 37 points off the bench represented a new franchise record for most points in a game by a non-starter, per Sam Perley of Hornets.com.

The Hawks are engaged in extension talks with Kevin Huerter, and coach Nate McMillan hopes an agreement can be reached before next month’s deadline, tweets Sarah K. Spencer of The Atlanta Journal-Constitution. Speaking at Media Day, McMillan said the Hawks are “crossing their fingers” that a new deal will happen and the team is laying a foundation by signing core players to long-term contracts this offseason.

Huerter also expressed hope, telling Spencer, “We’re still working. It’s something we’ve kind of worked through throughout the summer. Mostly I let my agent and (general manager Travis Schlenk) handle (it). Obviously I hope to get something done, but there’s no guarantees.” (Twitter link).

Extension talks are ongoing between the Hawks and Kevin Huerter, but president of basketball operations Travis Schlenk isn’t sure if anything will get signed, Chris Kirschner of The Athletic writes.

“As I’ve said all along, we’re hopeful to get something done with Kevin long-term, but if we don’t, that’s OK too,” Schlenk said. “As we saw last year with John (Collins), that certainly doesn’t mean that we’re not going to work hard next year in free agency to try to get Kevin wrapped up long-term. These things are kind of hard to predict how things will go. They’re kind of hard to do.”

If no agreement is reached, Huerter will be a restricted free agent next summer.

We have more on the Hawks:

1:08pm: The Hawks have officially announced Capela’s extension, issuing a press release to confirm the move. 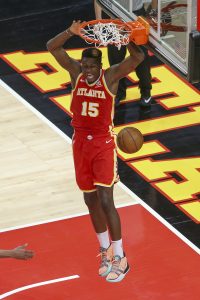 “Clint is one of the premier defensive and rebounding big men in the league. His presence in the paint and voice on defense had a tremendous impact on our success last season,” Hawks president of basketball operations Travis Schlenk said in a statement. “He is a great teammate who leads by example and we are excited to have him as a part of our team long-term.”

10:52am: The Hawks and center Clint Capela have reached an agreement on a contract extension that will add two years and $46MM to his current deal, reports ESPN’s Adrian Wojnarowski (via Twitter).

Capela remains under contract for two years entering the 2021/22 season, so his new deal will go into effect beginning in ’23/24 and will keep him under team control for four years in total.

The anchor of the Hawks’ defense, Capela finished sixth in Defensive Player of the Year voting and helped lead the team to a spot in the Eastern Conference Finals with playoff series wins over the Knicks and Sixers.

However, Chris Kirschner of The Athletic suggests (via Twitter) that the base value of the two-year extension is closer to $42MM, which indicates those numbers will come in slightly lower.

Capela’s contract also features $2MM in annual incentives, $1.5MM of which are currently considered “likely to be earned,” since he received them in 2020/21. He got a $1MM bonus for making the Conference Finals and $500K for a defensive rebounding rate above 30%, but missed out on a $500K bonus for shooting below 65% on free throws. Those annual incentives will be included in Capela’s extension as well, potentially boosting the total value of the deal by up to $4MM.

Trae Young Won’t Play In Game 5; Capela To Suit Up

Young is hopeful of playing in Game 6 in Atlanta on Saturday. Young also missed Game 4, a 110-88 Hawks victory, due to a right foot bone bruise.

He was listed as questionable to play in Game 5 but obviously the injury hasn’t healed sufficiently for Young to suit up. He was injured in Game 3 after stepping on an official’s foot.

Both teams will be missing their best player in the pivotal game of a series tied at two games apiece. Giannis Antetokounmpo was ruled out earlier in the day after hyperextending his left knee in Game 4.

Young missed Game 4 on Tuesday with a right foot bone bruise, so the questionable tag should give Hawks fans some hope he’ll return to action in the pivotal game of the series. Atlanta’s 110-88 victory in Game 4 knotted the series at 2-2.

Capela is dealing with right eye inflammation. He caught an elbow from Bucks guard Sam Merrill in the late going, Tim Bontemps of ESPN tweets. He contributed 15 points and seven rebounds in 28 minutes during Game 4.

The Bucks are likely to be without their star. Giannis Antetokounmpo is listed as doubtful after suffering a hyperextension of his left knee in Game 4. An MRI revealed no structural damage.