The Bulls figure to explore potential roster upgrades at the trade deadline, but they’re resistant to the idea of moving Patrick Williams, Michael Scotto said on the latest episode of the HoopsHype Podcast.

If the Bulls want to make a major move at the deadline, it may have to involve Williams, 2020’s No. 4 overall pick, since the club has already traded away multiple future first-rounders. Williams’ ability to help the team this year may also be limited, since a wrist injury is expected to sideline him for most or all of the regular season.

Still, based on Scotto’s reporting, it sounds as if Chicago will likely hang onto Williams. One Bulls player who is available in the right deal is 2019 lottery pick Coby White, rival executives tell Scotto.

Here’s more from the HoopsHype Podcast:

As we previously detailed, John Wall met with Rockets management on Sunday, including general manager Rafael Stone and head coach Stephen Silas. Wall informed his bosses he would like to return to the court and be a starter again. Since the Rockets would prefer to have him play a limited role off the bench, the two sides reached an impasse.

However, the situation remains fluid, according to Jonathan Feigen of the Houston Chronicle. Silas said the Rockets will continue to have conversations with Wall while he works himself into game shape over the next couple weeks.

“Rafael and I did meet with John (on Sunday) and he had indicated that he wants to play and work towards that so right now we’re in that phase as far as getting him back in game shape,” Silas said. “He’s been doing a lot of one-on-oh type stuff and one-on-one type stuff but nothing up and down, nothing four-on-four, five-on-five.

“Right now is the ramp-up time. That’ll probably take a couple weeks. We’ll continue our conversations and try to determine what it looks like.”

There’s an expectation around the NBA that Rockets big man Christian Wood will generate “significant” trade interest this season, according to Kevin O’Connor of The Ringer, who adds that people around the league believe Houston will consider offers.

As O’Connor notes, one reason Wood chose to sign with the Rockets a year ago was to play with James Harden, which obviously didn’t last long. That doesn’t necessarily mean Wood wants out now, but he’d be more valuable to a playoff team than a rebuilding club. Rival executives have wondered whether Houston will be motivated to trade its veteran bigs – Wood and/or Daniel Theis – in order to open up more minutes for promising rookie Alperen Sengun, O’Connor writes.

I’d be a little surprised if the Rockets look to move Theis this season — the team signed him to a long-term deal in August after having drafted Sengun and fully committed to the rebuild, so he doesn’t fall into the same category as vets like Wood, John Wall, and Eric Gordon, who were on the roster before Harden was dealt. For what it’s worth, O’Connor says Theis will receive “mild” trade interest from teams in need of a reliable backup center.

While it remains to be seen whether either Wood or Theis will be dealt, the 3-16 Rockets should certainly be sellers at the February deadline — Wall, Gordon, D.J. Augustin, and Danuel House are among the other vets who could be shopped.

After losing 15 straight games, the Rockets have now won two in a row and the turnaround started with a lineup change, writes Jonathan Feigen of The Houston Chronicle. Free agent addition Daniel Theis, who had been the starting center, hasn’t played the last two games as coach Stephen Silas opted for a smaller starting lineup with Christian Wood in the middle. Wood set two career highs this week with six assists Wednesday and 33 points Saturday.

“We’re moving the ball, we’re taking open shots and we’re making shots,” Silas said after Saturday’s win over Charlotte. “How many games in a row did we shoot under 30% from three? We shot 47 (percent) tonight. Part of it is playing Armoni (Brooks) a little bit more, playing Garrison (Mathews) a little bit more. But also having some space out there so we can get our drive-and-kicks. Once a few go, you get a lot more confident about shooting your shots. Pretty confident shooting right now.”

Rockets big man Christian Wood has used a perceived Team USA Olympic selection slight and a positional switch from center to power forward as fuel for his own development, per Kelly Iko of The Athletic.

“(The move to power forward from center) allows me to show what I can do, and it allows the floor to be open, and I can create for other guys and I can create for myself,” said Wood, who connected on 37.4% of his 5.0 three point looks per night during the 2020/21 season. “I wanted to be one of the best bigs in this league, and I have to go out every night and show that.”

“There’s been big-time growth, there’s been big-time maturity, there’s been a lot,” head coach Stephen Silas raved following a 31-point, 14-rebound, three-block performance from Wood in a 124-91 victory over the Thunder on Friday. “I think another part of it is the fact that this is the first time he’s been on the same team for two consecutive years. And you see the growth from year to year, you see the trust that goes back and forth between he and I, the trust that goes back and forth between him and his teammates who know him and know what he can do.”

Third-year guard Kevin Porter Jr., who dealt with off-court issues early in his NBA career, said earlier this week that the Rockets “saved my life” and “picked me up when I was down.” Head coach Stephen Silas isn’t taking those words lightly, telling reporters on Tuesday that it means a lot to him to develop such important relationships with players, according to Jonathan Feigen of The Houston Chronicle.

“It means everything,” Silas said. “That’s why you coach. For the stories, for the guys who maybe aren’t given a shot or feel like they are not able to have the opportunity they deserve. Hopefully, I can put … him in a position where he can be as successful as he can possibly be, whatever it is.”

Silas only has one year of experience as a head coach under his belt, but showed during his years as an assistant coach that he was capable of making those connections with his players, according to Rockets guard D.J. Augustin.

“Steve’s always been like that,” Augustin said, per Feigen. “I was with Steve in Charlotte when he was an assistant. He’s always been a great people person. Some coaches, they’re not good with communicating with players off the court. Steve is that guy who has the ability to kind of connect with players, especially with younger guys.”

Here’s more on the Rockets:

The Rockets and John Wall mutually agreed earlier this month to hold him out of games and work together on finding a trade, but the veteran point guard believes he still has a role to play with the team off the court.

Wall reiterated several times during his Media Day availability today that his main priority is to serve as a veteran mentor to Houston’s young players, and also stated that he’s 100 percent healthy entering the new season (Twitter link via Jonathan Feigen of the Houston Chronicle).

Wall, who isn’t sure which team he’d like to be traded to, told reporters on Monday, “My job is to be here with this team, stay healthy, and see what the future holds” (Twitter link via Kelly Iko of The Athletic).

General manager Rafael Stone and the Rockets’ front office are in lock-step with Wall, a stark contrast to the situation in Philadelphia. Stone says that the communication between the two sides has been great, stating, “In terms of our communication it’s been easy. The challenge was what works for everyone long term. It’s not like our communication ends today” (Twitter link via Iko).

When asked about the possibility of a buyout with Wall, Stone said he doesn’t expect that to happen anytime soon, if at all.

AUGUST 7: The sign-and-trade deal with the Bulls is official, the Rockets announced in a press release, with Chicago getting cash considerations in return. 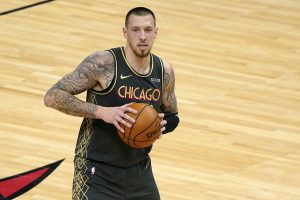 “Daniel is a versatile center who impacts both ends of the court,” Rockets general manager Rafael Stone said. “We’re looking forward to adding his skillset to our young core and giving Coach (Stephen) Silas even more flexibility with his lineups.”

AUGUST 2: The Rockets will fortify their frontcourt by signing Daniel Theis to a four-year contract worth $36MM, his agents at CAA Basketball tell Adrian Wojnarowski of ESPN (Twitter link).

Theis was frequently linked to Houston in the days leading up to free agency. As Tim MacMahon of ESPN notes (via Twitter), Houston’s plan is to work with the Bulls, Theis’ old team, to complete a sign-and-trade deal that would allow the Rockets to fit the center into their leftover trade exception from the Victor Oladipo trade.

That trade exception is worth about $8.2MM and could be used to sign Theis to a contract worth up to $35.6MM over four years. Taking that approach would preserve Houston’s mid-level exception for another signing (or multiple signings).

According to Jonathan Feigen of The Houston Chronicle (Twitter link), the Rockets are expected to send cash to the Bulls to finalize the sign-and-trade.

While Theis isn’t particularly dangerous on the offensive end, he’s a solid defender who will give the Rockets another reliable veteran in the frontcourt alongside Christian Wood.

The Bulls appear to be aware that they need to upgrade their playmaking. Brian Windhorst of ESPN reports (Twitter video link) that Chicago could be looking to add Pelicans guard Lonzo Ball and Spurs guard DeMar DeRozan to their roster.

Windhorst notes that the Bulls may be able to extract Ball from the Pelicans in a sign-and-trade deal, provided the Pelicans can add a point guard replacement for Ball either in the trade or elsewhere. The notion of DeRozan joining the Chicago backcourt as well is intriguing. “From what I am told, [the Bulls] are also interested in DeMar DeRozan, and are interested in pulling off a possible double sign-and-trade where they would send [Chicago’s restricted free agent power forward] Lauri Markkanen to San Antonio,” Windhorst said in an ESPN segment.

Here are more free agency rumors from around the NBA, with the official start of the signing season just moments away:

There was talk last week that the Pelicans would be a serious suitor for Chris Paul in free agency, but that chatter seems to have faded, according to John Hollinger of The Athletic, who says the veteran point guard is now widely expected to re-sign with the Suns.

As Hollinger explains, he heard the Suns’ initial offer to Paul when the two sides were discussing a possible extension was somewhat “underwhelming,” but the club now appears prepared to offer a more serious package. No one around the league will be surprised if the total value of Paul’s new deal gets up to $100MM or more, Hollinger adds.