Nets superstar Kevin Durant voiced his displeasure over Kyrie Irving not being able to play in the team’s home game on Sunday, Nick Friedell of ESPN tweets. Durant’s comments were made toward Eric Adams, mayor of New York City.

“Eric, you got to figure something out, man, because it’s looking crazy,” Durant said. “Especially on national TV, and he can come to the game, but not play, come on, man.”

Irving was at Sunday’s game as an unmasked spectator and even entered the team’s locker room, but he still can’t play at Barclays Center or Madison Sqaure Garden due to the city’s private sector vaccine mandate. The Nets wound up winning the game 110-107 behind Durant’s 53 points.

Here are some other notes out of the Atlantic Division:

James Harden believes the lingering effects of last year’s hamstring injury are gone and he’s ready to play at an MVP level again, writes Brian Lewis of The New York Post. Harden was dominant Friday in the Nets‘ win over the Spurs, putting up 37 points, 11 assists and 10 rebounds along with a highlight dunk that should calm any fears about his explosiveness.

Brooklyn will need those type of performances to remain in contention for the top spot in the East with Kevin Durant likely sidelined until after the All-Star break with a sprained left knee and Kyrie Irving limited to road games because of New York City’s vaccine requirement. Harden feels ready to lead the team while it’s short-handed.

“Yeah, I’m definitely back,” he said. “It’s just throughout the course of the year we had so much going on (with) our team. A lot of injuries and whatnot, and obviously the situation with Kyrie, so it’s really difficult to get a rhythm like we all want to. But we just got to continue to fight, continue to take one game at a time and push through it. Eventually this thing is going to come together where we’re all together and we all make a really, really huge run at this thing.”

“For sure, it was a breakthrough,” Harden said. “(Kyrie)’s capable of doing that at any moment and any point in the game. That’s one of the reasons why we need him every single game, because he’s able to do that, especially with everything that’s going on with our team. But he’s able and more than capable of doing things like that whenever he wants. I think he just tries to get us involved a little bit more, but he’s a special talent.”

Of course, Irving can only play half the time due his unvaccinated status. Kevin Durant is sidelined by a knee injury and there’s no timetable for his return.

The Nets plan to bring Kyrie Irving back for road games once he clears health and safety protocols, but general manager Sean Marks may not be committed to that as a long-term decision, tweets Stefan Bondy of The New York Daily News. Asked today if the team will continue with Irving as a part-time player when the roster returns to normal, Marks declined to answer, calling the question “hypothetical.”

Brooklyn has been hit hard by COVID-19 in the past week and currently has 10 players in health and safety protocols with tonight’s addition of rookie Day’Ron Sharpe, tweets Tim Bontemps of ESPN. The Nets, who also have Joe Harris sidelined after ankle surgery and Nicolas Claxton sitting out with soreness in his wrist, are missing 12 players for tonight’s game with Orlando. They signed four players this week with hardship exceptions to fill out their roster.

Marks admits the extreme shortage of personnel was behind the decision to let Irving start playing again, writes Tim Reynolds of The Associated Press, although he’s still ineligible for home games because he hasn’t met New York City’s vaccine requirement.

Irving was placed in the league’s health and safety protocols earlier today, which means he either tested positive for the virus or returned an inconclusive result. Marks said he hasn’t appealed to Irving to get vaccinated or tried to change his mind about the issue, Reynolds adds.

“There’s also a risk for Kyrie when a guy comes in and if they’re not vaccinated,” Marks said. “I don’t want to get into those type of discussions, but that’s a risk for him coming into this environment, not just the team and so forth. But we’re all well aware of the status and his status and moving forward and how we’ll navigate this as best we can.”

Coach Steve Nash echoed Marks’ comments in a pre-game meeting with reporters, saying the original decision on Irving was based on continuity, but “continuity’s out the window now,” tweets David Aldridge of The Athletic.

“I’m excited to have Kyrie back,” Nash continued (Twitter link from Michael Scotto of HoopsHype). “He’s an incredible player, no matter what capacity. We’ll incorporate him in. It’s a positive for our group.”

Owner Joe Tsai also spoke about the thinking behind the reversal on Irving, telling Brian Lewis of The New York Post that the decision was made solely for basketball reasons and isn’t an attempt to make a statement about the vaccine mandate.

“We’re trying to be practical. And I’ve always said I don’t want to make this a political issue,” Tsai said. “My only religion is to win games and win the championship. That’s where we are.”

The Knicks will be looking to pick up a win in Milwaukee on Friday night, but Julius Randle views the Bucks as a success story worth emulating, as Fred Katz of The Athletic details. Milwaukee won a title in Giannis Antetokounmpo‘s eighth season, having patiently built a championship-caliber roster around its star player without making any major splashes on the free agent market.

“It was beautiful to watch simply because the aspect of, they built it from the ground up,” Randle said. “They didn’t put a super team together or whatever it was. These guys were in the mud every day grinding the thing out. They took some lumps along the way there trying to figure it out.”

While the Knicks lack a bona fide superstar on the level of Antetokounmpo, Randle likes the idea of building the roster “organically” and believes that it an eventual breakthrough would be more rewarding.

“(The Bucks) did something that’s very unique, especially in today’s league, as far as building something like that and not putting a bunch of players together,” he said. “They really built it.”

The Nets have signed first-round pick Day’Ron Sharpe to his first NBA contract, the team announced on Friday in a press release.

The Suns drafted Sharpe with the No. 29 pick last week on behalf of the Nets, who had agreed on draft day to acquire that pick along with Jevon Carter in exchange for Landry Shamet. The trade couldn’t become official until today, and Brooklyn didn’t waste any time in locking up Sharpe to his rookie contract.

Sharpe, who declared for the draft after a single season at North Carolina, averaged 9.5 PPG and 7.6 RPG in 29 games (19.2 MPG) for the Tar Heels. The 6’11” center is one of five prospects selected by the Nets in this year’s draft and is the second one to officially sign with the club, joining fellow first-rounder Cameron Thomas.

As our breakdown of this year’s rookie scale salaries shows, Sharpe is on track to earn just over $2MM in his first NBA season is he receives the maximum allowable 120% of the rookie scale.

AUGUST 6: The Suns have officially acquired Shamet from the Nets in exchange for Carter and the rights to Day’Ron Sharpe, the team announced in a press release. 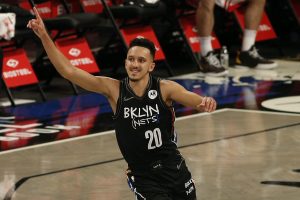 JULY 29: The Nets have agreed to trade sharpshooter Landry Shamet to the Suns in exchange for Jevon Carter and the No. 29 pick in Thursday’s draft, according to ESPN’s Adrian Wojnarowski (Twitter link).

As a result, Brooklyn now owns the 27th, 29th, 44th, 49th and 59th picks in the 2021 draft. Carter, a 6’1″ point guard, will provide backcourt depth behind the likes of Kyrie Irving and James Harden, assuming he stays with the team.

Phoenix wasn’t interested in using the No. 29 pick on a player who likely wouldn’t have played much, preferring to add a more proven veteran to the mix, John Gambadoro of Arizona Sports 98.7 tweets. The Suns are coming off their first NBA Finals berth since 1993 and third berth in franchise history.

Suns coach Monty Williams is a strong supporter of Shamet, dating back to when he coached him as an assistant with the Sixers, Wojnarowski notes (via Twitter). The 24-year-old Shamet averaged 9.3 points per game in 61 contests last season, shooting 41% from the floor and 39% from three-point range.

As ESPN’s Bobby Marks notes (via Twitter), the trade won’t be completed until August 6 at the earliest. Shamet’s salary will increase from $2MM to $3.76MM for next season, while Carter will make $3.65MM in 2021/22. Shamet also becomes eligible for a rookie-scale extension on August 6.

Baylor guard Jared Butler has been referred to a Fitness to Play panel by the NBA, according to Shams Charania of The Athletic, who reports (via Twitter) that Butler won’t be able to play or practice in the league until he’s cleared. In the short term, he’s also unable to participate in on-court elements of the pre-draft process, though he can still meet with teams and conduct off-court activities (Twitter link).

While it’s unclear what aspect of Butler’s medicals caught the NBA’s attention, the league’s Fitness to Play panels typically deal with cardiac illnesses or conditions, or issues related to blood clots and other blood disorders. Hopefully this setback is just a temporary one for precautionary reasons and Butler is cleared to get back on the court soon.

The NBA has revealed via press release its list of 69 players who have been invited to next week’s draft combine in Chicago and who are expected to attend. The combine will take place from June 21-27.