The Knicks have officially announced that they have waived center Joakim Noah, with both Adrian Wojnarowski and Ian Begley of ESPN reporting that the club will utilize the stretch provision on his contract after failing to reach a buyout agreement. 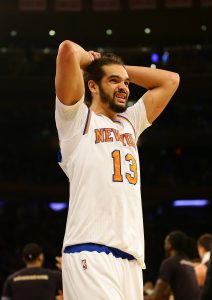 The team also officially announced the release of Kadeem Allen and Jeff Coby, thereby bringing its roster down to 17 players, including two two-way players, in time for the beginning of the regular season.

We wrote in extensive detail about Noah’s situation a few days back, with Stefan Bondy of The New York Daily News reporting that the Knicks would likely waive Noah when they set their 15-man regular season roster if and when the team was unable to find a deal to trade the veteran big man.

Allen, a 2017 second-round draft pick by Boston, spent his rookie season on a two-way contract with the Celtics, but was waived earlier this summer before he signed a one-year, non-guaranteed contract with the Knicks. He could end up with the Westchester Knicks, New York’s G League affiliate, if he’s not picked up on waivers by another team.

Coby, 24, and a member of the Haitian national team, played four seasons in the Ivy League at Columbia before heading overseas and then going undrafted last year before signing with the Knicks earlier this month. He’s also a good bet to end up in Westchester.

OCTOBER 7: The signing is official, the Knicks announced on Twitter. The move brings New York back to the training camp limit of 20 players.

SEPTEMBER 20: Forward Jeff Coby will sign a contract with the Knicks, according to Nicola Lupo of Sportando.

It’s unclear whether the Knicks intend to add him to their 20-man training camp roster. If he signs an Exhibit 10 deal, he would receive a bonus worth up to $50K if he’s waived and then spends at least two months with the club’s G League affiliate, the Westchester Knicks.

The Knicks agreed to an Exhibit 10 deal with Tyrius Walker on Wednesday.

Tim Hardaway Jr. started 54 of the 57 games he played last season, but he doesn’t mind having to fight for a starting position in camp, relays Marc Berman of The New York Post. New coach David Fizdale has declared an open competition for all five starting roles, which means there are no guarantees even for a player like Hardaway, who has the third-highest salary on the team at $17.325MM.

“Everybody has to compete,’’ Hardaway said. “No spots are given. Everything is earned. So you’ve got to go out there and play with heart, play with passion. He’s going to make the right decision, put the five guys that he wants on the floor to start the game and we go on from there.”

Hardaway Jr. has a much longer relationship with Fizdale than any of his Knicks teammates. Hardaay’s father played for the Heat when Fizdale entered the league as a video coordinator in 1997/98 and served as a scout for Miami while Fizdale was an assistant coach.

“I just remember him being this little kid running around Miami Arena,” Fizdale said. “Now how my life’s come full circle with him. Now I’m his coach. It’s just fun for me. Because we have that connection with our families. … I really want to see him make it, but his deal is the same as everybody else’s: Earn it.’’