Former Jazz coach Jerry Sloan has passed away due to complications from Parkinson’s disease and Lewy body dementia, the team announced today in a press release. Sloan was 78 years old. 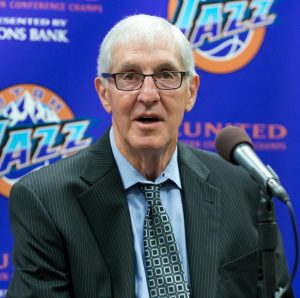 “Jerry Sloan will always be synonymous with the Utah Jazz,” the club said in a statement. “He will forever be a part of the Utah Jazz organization and we join his family, friends and fans in mourning his loss. We are so thankful for what he accomplished here in Utah and the decades of dedication, loyalty and tenacity he brought to our franchise.”

After a two-and-a-half-year stint coaching the Bulls from 1979-82, Sloan took over as Utah’s head coach during the 1988/89 season. He remained in that role for 23 years, compiling a 1,127-682 (.623) regular season record with the franchise during that time. He also won 96 postseason contests with the Jazz, leading the club to two NBA Finals appearances against Michael Jordan‘s Bulls in 1997 and 1998.

Sloan’s 1,221 wins as an NBA head coach place him fourth in league history, behind only Don Nelson, Lenny Wilkens, and Gregg Popovich. He was inducted into the Basketball Hall of Fame in 2009.

Prior to becoming an NBA coach, Sloan was a standout player, having been drafted fourth overall by the Baltimore Bullets in 1965. He spent most of his playing career in Chicago, earning a pair of All-Star berths and six All-Defensive nods for the Bulls.

We at Hoops Rumors send our condolences to Sloan’s family and friends.

Now that Stan Van Gundy has reached an agreement with the Pistons, the Warriors are again in pursuit of Steve Kerr for their head coaching job, writes Diamond Leung of the Bay Area News Group. Although plenty of signs point to Kerr being the favorite to land with the Knicks, Frank Isola of the New York Daily News alludes to reports that New York remains steadfast in offering a four-year deal, rather than the five-year agreement that Kerr’s representatives are looking for. Keeping in mind that Golden State had been reportedly willing to offer Van Gundy a five-year deal, the Warriors’ latest pursuit may be enough to cause the Knicks to eventually meet Kerr’s asking price.

Here’s more out of the NBA’s coaching carousel tonight:

We put together a lengthy post Thursday on the latest about the Warriors and Knicks coaching situations, both of which seem tethered to Steve Kerr at this point. We’ll keep track of today’s updates below:

During Friday night’s game against Golden State, the Jazz will honor former head coach Jerry Sloan by raising a banner with the number “1223” embroidered on it, which denotes the total number of wins (regular season and playoffs) he helped deliver to Utah over his coaching career. Kurt Kragthorpe of The Salt Lake Tribune caught up with former Jazz and current Nets guard Deron Williams to get his current thoughts on Sloan:

“A big part of my success early in my career was due to him and the things he kind of instilled in me…So I’m definitely happy for him, and it’s going to be a special moment. The fans there just love him to death.” Williams also elaborated on the halftime argument with Sloan several years ago which reportedly triggered the former coach’s resignation:

“We got into a little argument — nothing more than we’ve ever done…So the way the fans perceive it is just one thing I can’t really control. Like I said, there’s no hard feelings on my end, and I enjoyed playing for him. I miss playing for him.”

Here’s more out of the Western Conference tonight:

We've already mentioned the "draft and stash" philosophy earlier in the night, and that's what Eddie Sefko of the Dallas Morning News thinks the Mavericks might do if they don't trade their 13th pick in this year's draft. He says they're eyeing German point guard Dennis Schroeder if they choose to keep the pick, which has been considered unlikely as they go for broke at another title with Dirk Nowitzki not getting any younger.

Nowitzki would help fellow German Schroeder mesh with the team, and the Mavs are looking for point guard help after Darren Collison failed to inspire a lot of confidence last season when the team missed the playoffs for the first time since the 1999/00 campaign. Schroeder can also be stashed if the Mavs don't feel he's ready to come in and play heavy minutes in the rotation.

Here's what else is happening around the Western Conference on the first Saturday night since the 2012/13 NBA season concluded.
Retweet 0 Share 0 Send via email0

A well-deserved congratulations to the Heat for winning the NBA Championship as well as the Spurs for putting up a hard fought series. As we wrap up one of the more memorable Finals matchups in recent history, here are some of tonight's news and notes out of the Western Conference:

The Jazz announced on Wednesday evening that they have hired Hall of Fame coach Jerry Sloan in an official capacity as a Senior Basketball Advisor.  Sloan's role will entail player evaluation at workouts, summer league and camps, as well as limited pro and regional college scouting and occasional practice observation.  The news was initially revealed by Jazz CEO Greg Miller via Twitter.

In a statement, via the team's website, Sloan said, “In my new role with the Jazz franchise, I hope to help the basketball operations staff and [head coach Tyrone Corbin] in any way that I can to achieve their goals.  I would like to thank the Miller family for the opportunity to be part of the organization again.”

A batch of notes regarding the league's never-ending coaching carousel:

The Jazz aren't one of the NBA teams still searching for a head coach, but they have talked to former coach Jerry Sloan about a potential return to the organization, reports Jody Genessy of the Deseret News. According to Genessy, the Jazz and Sloan have had preliminary discussions about the 71-year-old joining the team in an unspecified role, to help the franchise and coach Tyrone Corbin.

"That's up to (them)," Sloan said. "That's a situation that's strictly up to Ty or somebody in the Jazz organization. If they want me around, fine. If they don't, (fine). They'd talked to me a little bit about it a little bit earlier."

Sloan has been linked to a number of head coaching openings during the last couple summers, but it appears he has yet to find an ideal fit. The longtime Utah head coach joined the team's contingent at the NBA's Chicago predraft combine last month, at which point team president Randy Rigby indicated the Jazz would welcome Sloan back in a consulting role.

According to Genessy, Sloan is open to returning to the organization in some way, though it's not clear if he is interested in acting as a consultant, a coach, or an executive. Sloan stressed that he wouldn't want to be a distraction for Corbin and the rest of the coaching staff.

The Jazz have already reunited with one franchise icon this offseason, having brought Karl Malone aboard to work with the club's big men.

Although there are still a handful of NBA head coaching jobs available, the openings in Brooklyn and Los Angeles stand out, based on the regular-season success the Nets and Clippers had this past season. Neither team appears to have made significant progress in its search so far, but that could change soon. Here's the latest on the Nets' and Clippers' respective searches: