Thunder guard Shai Gilgeous-Alexander, who missed the team’s entire six-game preseason schedule due to Grade 2 MCL sprain in his left knee, is on track to be available for the regular season opener on Wednesday in Minnesota, head coach Mark Daigneault told reporters on Sunday (Twitter link via Joe Mussatto of The Oklahoman).

It’s good news for the Thunder and for Gilgeous-Alexander, who has missed significant time in each of the last two seasons because of injuries, including the last 10 games of 2021/22 due to a right ankle issue.

Luguentz Dort (left quad contusion) and Kenrich Williams (right groin strain) also should be available for the Thunder in the first game of the regular season, Daigneault said today (Twitter link via Mussatto).

In other Thunder cap news, JaMychal Green gave up $2,628,597 in his buyout agreement with the team. As our chart of minimum salaries shows, that’s the exact amount an eight-year veteran like Green would earn on a minimum contract, which is what he’ll reportedly sign with Golden State.

Here are a few more salary notes from around the NBA:

JULY 20: The Thunder have officially finalized Williams’ extension, the team announced today in a press release. 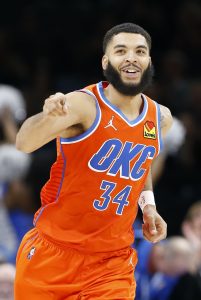 Williams, who will earn $2MM this season, is in the final year of his current contract, so his new deal will begin a year from now and will run through the 2026/27 campaign. His $2MM salary for ’22/23 had been non-guaranteed, but it’ll become protected as part of the extension agreement, tweets ESPN’s Bobby Marks.

According to Joe Mussatto of The Oklahoman (Twitter link), the first three years of the extension will be guaranteed, while the fourth will be a team option.

Williams, 27, is an unlikely extension recipient. The veteran swingman, who began his college career at New Mexico Junior College and went undrafted in 2018, spent his first two professional seasons with the Pelicans before being signed-and-traded to Oklahoma City in the Steven Adams deal during the 2020 offseason as a throw-in piece for salary-matching purposes.

After shooting just .371/.304/.489 in 85 games with New Orleans, Williams developed a more reliable three-point shot in Oklahoma City, boosting his shooting percentages to .501/.391/.559 in 115 games over the last two seasons. He’s also a solid, versatile defender who has now averaged 21-plus minutes per game for four straight years.

Williams is the eight player to agree to a veteran contract extension so far during the 2022/23 league year, as our tracker shows.

Because his extension exceeds three total years (including the one left on his current deal), Williams will be ineligible to be traded for six months once he officially signs his deal.

Speaking on Thursday to reporters, including Joe Mussatto of The Oklahoman (Twitter link), Thunder head coach Mark Daigneault said that veteran center Derrick Favors will miss the remainder of the season with lower back soreness. Favors hasn’t played since February 24.

While Favors’ per-minute averages are still decent, he’s been trending downward the past few seasons.

Daigneault also said that Kenrich Williams is doubtful to return to action this year as he continues to deal with a sprained knee. He has been sidelined even longer than Favors, since February 14.

The tanking Thunder currently hold a 22-54 record, which is the fourth-worst mark in the league according to our reverse standings.

Thunder guard Shai Gilgeous-Alexander will return to action on Thursday after missing the team’s last 10 games due to a right ankle sprain, head coach Mark Daigneault said today (Twitter link via Joe Mussatto of The Oklahoman). Gilgeous-Alexander suffered the injury on January 28.

The 18-40 Thunder are 6.5 games back of the No. 10 seed and aren’t expected to prioritize making the playoffs this season, so it’s safe to assume they wouldn’t be bringing back Gilgeous-Alexander if he weren’t feeling 100% healthy.

The star point guard had been averaging 22.7 PPG, 5.5 APG, and 4.7 RPG shooting in 43 games (34.6 MPG) before going down with his ankle injury. He has struggled to score efficiently this season, however, posting career-low shooting percentages of 42.4% from the floor and 27.8% on threes.

Rookie guard Josh Giddey has been thriving with Gilgeous-Alexander out of the lineup, having recorded three consecutive triple-doubles in the games leading up to the All-Star break. He likely won’t have the ball in his hands as much with SGA on the court, so Daigneault may have to get creative with his lineups and his rotation to ensure Giddey doesn’t lose that momentum.

According to Daigneault, Jeremiah Robinson-Earl (foot), Mike Muscala (ankle), Ty Jerome (hip), Luguentz Dort (shoulder), and Kenrich Williams (knee) are still sidelined. Daigneault didn’t offer any guarantees when asked if Muscala, who is considering offseason ankle surgery, will be back this season (Twitter links via Mussatto).

The Kings are still expected to make some sort of major move ahead of this year’s trade deadline in an effort to strengthen their roster for a postseason push, writes Jake Fischer of Bleacher Report. Sacramento has expressed interest in both Pacers centers, Myles Turner and Domantas Sabonis, but Fischer hears that Indiana’s asking price has been much higher than what teams are willing to give up for either player.

According to Fischer, who says the Pelicans also have interest in Sabonis, Turner is still the more likely trade candidate of the two Indiana centers, but only if the Pacers are willing to drop their asking price a little, since teams are concerned about Turner’s injury recovery timeline and his ability to help a team this season. If the price remains high, Turner may stay in Indiana until the offseason.

One team to watch on the Turner front is the Trail Blazers, who gained some momentum in discussions with the Pacers prior to the big man’s injury, according to Fischer. If Portland is focused more on next season than this season, acquiring Turner would make some sense, but the Blazers still hold a play-in spot in the West, so they probably aren’t prepared to just throw in the towel.

Here are a few more trade rumors from around the West:

Pacers head coach Rick Carlisle said on Thursday that the team doesn’t have a “definitive” timeline for Domantas Sabonis‘ return from a left ankle sprain, but told reporters the All-Star big man will likely miss “at least a few games” (Twitter link via Ohm Youngmisuk of ESPN).

As we observed on Thursday, it’s bad luck for the Pacers that two of their top trade candidates – centers Sabonis and Myles Turner – are battling injuries with the February 10 deadline around the corner. However, Sabonis’ injury in particular seems unlikely to be a long-term concern. There’s still a good chance Indiana hangs onto Sabonis, but any trade offers the team gets shouldn’t be negatively impacted by what appears to be a minor ailment.

The Bulls figure to explore potential roster upgrades at the trade deadline, but they’re resistant to the idea of moving Patrick Williams, Michael Scotto said on the latest episode of the HoopsHype Podcast.

If the Bulls want to make a major move at the deadline, it may have to involve Williams, 2020’s No. 4 overall pick, since the club has already traded away multiple future first-rounders. Williams’ ability to help the team this year may also be limited, since a wrist injury is expected to sideline him for most or all of the regular season.

Still, based on Scotto’s reporting, it sounds as if Chicago will likely hang onto Williams. One Bulls player who is available in the right deal is 2019 lottery pick Coby White, rival executives tell Scotto.

Here’s more from the HoopsHype Podcast:

Two NBA head coaches have exited the health and safety protocols today. Hawks coach Nate McMillan was back at practice with the team on Tuesday, according to Sarah K. Spencer of The Atlanta Journal-Constitution (Twitter link). McMillan should be ready to return to Atlanta’s bench on Wednesday night when the team hosts Miami.

Additionally, Pistons head coach Dwane Casey is no longer in the protocols after having entered them on Monday. In a press release confirming Casey’s status, the club stated that Casey registered two consecutive negative COVID-19 tests following what was believed to be a false positive. Casey will coach Detroit on Tuesday night against Chicago.

Here are a few more protocol-related updates from around the league:

Nuggets assistant Popeye Jones won his first game as acting head coach on Saturday against the Rockets, Mike Singer of the Denver Post writes. Jones was coaching in place of head coach Michael Malone and lead assistant David Adelman, both of whom entered health and safety protocols.

“I’m blessed to be a part of this organization,” Jones said after the game. “You come in as the only new guy, and guys are trying to get a feel for you. … To come into this culture, and all these guys are such good guys, man. They don’t complain, they work hard every day. Like I told them, ‘You established this culture. I’m blessed just to be a part of it.’”