An injury continues to disrupt what may be Dirk Nowitzki‘s final NBA season, writes Dwain Price of Mavs.com. The Mavericks star said he is still “weeks” away from returning to action because of a left ankle problem that has bothered him since undergoing surgery in April. He hasn’t been able to participate in a full practice or go through a normal workout.

When Nowitzki does return, the Mavs haven’t decided whether he will remain a starter or be moved to the second unit.

There’s more tonight out of Texas:

As expected, the Spurs have waived retired guard Manu Ginobili, tweets Shams Charania of The Athletic. The move is a formality in order to reach the regular season roster limit.

Although Ginobili announced his retirement in August, he had one final year on his contract with San Antonio and technically remained a member of the team until today. Like they did with Tim Duncan when he retired, the Spurs released Ginobili and will pay him for one final season following his decision to call it a career. The longtime Spur will count for $2.5MM against the team’s cap in 2018/19.

San Antonio now has 15 players on standard contracts and one more on a two-way deal, so the team is all set to start the season. It will be interesting to see if the Spurs use that second two-way contract slot in order to add some point guard depth in the coming days.

You can check out our full story on Ginobili’s retirement from August right here.

Manu Ginobili Not Planning On Coaching

Relaying a column that Ginobili wrote for Argentine newspaper La Nacion, Orsborn notes that the 41-year-old enjoyed the opportunity to “learn and see basketball from the other side” during Popovich’s coaches retreat. However, Ginobili says he has “no intention” of becoming a coach at this point, opting instead to happily settle into his retirement.

Although Ginobili isn’t about to accept a coaching role with the Spurs or any other team, he has been in attendance at training camp this week, Orsborn points out. The longtime San Antonio guard wrote in his La Nacion column that he believes the Spurs – who added one of the league’s best scorers in DeMar DeRozan – will be better offensively than they were last season, but will be tested on defense.

In a previous column for La Nacion, Ginobili said that he’d be open to a role with the Spurs, albeit perhaps not in an official capacity: “My children have already started classes and while I’m in town I’ll be close to the team and the franchise. Maybe I can’t help (anymore) by taking a (charge) or (with a steal) or something, but I’ll try to add in what I can. … If I can help from the outside, I will do it with pleasure.”

Shooting guard DeMar DeRozan says he’s more motivated than he’s ever been in his career, as he told NBA.com in a TV interview. DeRozan was highly agitated when the Raptors traded him away to the Spurs and while he claims he’s over the disappointment, he feels he has something to prove while moving to the Western Conference. “I treated my whole summer workout with that motivation, that chip on my shoulder. It’s making me more anxious to get out there and play,” he said.

In other news around the Spurs:

Manu Ginobili admitted that his decision to retire was painstaking and that Spurs coach Gregg Popovich tried to convince him to play another year. “I am very sure about the decision, it’s still awkward,” Ginobili said during a press conference that was relayed by NBA.com. “But my finger shaked a lot before hitting that enter (button). It wasn’t an easy decision.”

Popovich was hoping that he could change Ginobili’s mind but realized quickly that his longtime sixth man wasn’t going to budge.

“He briefly tried to convince me. He saw me very convinced,” Ginobili said. “I guess he saw it right away. He respected my decision, of course, and we had a great talk.”

Ginobili announced his retirement on August 27th. The deciding factor was the lack of desire to go through the rigors of an 82-game regular season one more time.

“I couldn’t see my body doing through that kind of grind again,” he said. “When I came back here and came to workout a little bit to lift or bike or whatever, I saw Bryn (Forbes), I saw Dejounte (Murray) and some of the guys working out and preparing for the season and I was so far from that. That’s when I said, ‘For sure, this is it.’ There was a little bit of that door opened, but it closed pretty quick.”

Ginobili, 41, was the 57th overall pick in the 1999 draft. The Argentinian played overseas for three more seasons, then joined the Spurs in 2002, spending the next 16 years with the franchise.

Over the course of his NBA career, Ginobili appeared in 1,057 regular season contests, averaging 13.3 PPG, 3.8 APG, and 3.5 RPG. He also played in 218 more postseason contests, winning four championships with the Spurs. A two-time All-Star and two-time All-NBA player, the Argentinian shooting guard was the NBA’s Sixth Man of the Year in 2008.

The third overall pick from the 2018 NBA Draft, Luka Doncic, will not be part of the Slovenian national team for September’s FIBA World Cup qualifiers, per a Sportando report. Instead, he will remain in the United States to prepare for the upcoming NBA season, Doncic confirmed with a tweet.

Doncic, 19, was drafted by the Hawks with the third pick in the draft but was immediately traded to the Mavericks in exchange for the draft rights to Trae Young and a 2019 first-round pick. Given his past success internationally, it was possible that Doncic would have suited up for the Slovenian team before the NBA season started.

With Real Madrid this past season, Doncic racked up several major awards.  He became the youngest player to win the EuroLeague Final Four Most Valuable Player award in addition to being named the EuroLeague MVP and Rising Star.

Manu Ginobili will soon be officially removed from the Spurs‘ roster after announcing his retirement as a player on Monday. However, he’s not opposed to the idea of sticking with the franchise in some capacity. As Tom Orsborn of The San Antonio Express-News relays, Ginobili wrote a Spanish-language column in the Argentine newspaper La Nacion in which he touched on his possible next steps.

“What I made clear to (Gregg Popovich) is that it’s not ‘Ciao, I’m leaving,'” Ginobili wrote. “My children have already started classes and while I’m in town I’ll be close to the team and the franchise. Maybe I can’t help (anymore) by taking a (charge) or (with a steal) or something, but I’ll try to add in what I can. I have a great appreciation for my teammates, for the staff and all the people on the team and I want it to go as well as possible. If I can help from the outside, I will do it with pleasure.”

If Ginobili wants to take on some sort of role with the Spurs, there’s little doubt that the team would welcome him aboard. When Tim Duncan retired in 2016, Popovich indicated that Duncan would stick around the club in an unofficial capacity and would be “coach of whatever he wants to be.” Ginobili could do something similar even if he’s not ready for – or interested in – a formal title within the organization.

Ginobili, who made his retirement announcement official on Monday, technically remains under contract with the Spurs on a $2.5MM contract for 2018/19. Like they did with Duncan in 2016, the Spurs figure to waive Ginobili at some point in the near future, ensuring that he’ll still receive his salary for the coming season.

The decision by Spurs guard Manu Ginobili to retire was a very difficult one for him, one of his agents told Tom Orsborn of the San Antonio Express News. The announcement was made on Monday. Herb Rudoy indicated there were numerous factors that went into the decision, primarily that it’s “much harder to do it at age 41.” Rudoy also cited family and a desire to travel as other factors in Ginobili’s decision, Orsborn adds.

We have more regarding the retirement of the longtime Spur:

Longtime Spurs guard Manu Ginobili has announced his retirement from the NBA. The team issued a press release today confirming the news, while Ginobili published his own statement via Twitter. 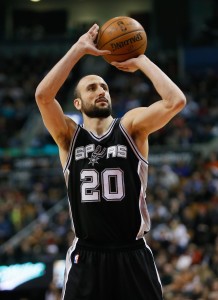 “Today, with a wide range of feelings, I’m announcing my retirement from basketball,” Ginobili wrote. “IMMENSE GRATITUDE to everyone (family, friends, teammates, coaches, staff, fans) involved in my life in the last 23 years. It’s been a fabulous journey. Way beyond my wildest dreams.”

It’s the end of an era in San Antonio, where the Spurs have now seen Tim Duncan, Tony Parker, Kawhi Leonard, and Ginobili depart within the last two-plus years.

Ginobili, 41, was the 57th overall pick in the 1999 draft, making him one of the best second-round picks in NBA history. After being drafted, he played overseas for three more seasons, then joined the Spurs in 2002, spending the next 16 years with the franchise.

Over the course of his NBA career, Ginobili appeared in 1,057 regular season contests, averaging 13.3 PPG, 3.8 APG, and 3.5 RPG. He also played in 218 more postseason contests, winning four championships with the Spurs. A two-time All-Star and two-time All-NBA player, the Argentinian shooting guard was the NBA’s Sixth Man of the Year in 2008.

Ginobili, who had been the NBA’s second-oldest active player and now becomes one of just seven players to spend his entire career of 16 years or more with a single time, will eventually be a Hall-of-Famer.

The Spurs had Ginobili under contract for one more season and had wanted him back for the 2018/19 campaign, but he’ll call it a career before finishing out that deal. If Duncan’s retirement in 2016 is any indication, San Antonio figure to waive Ginobili at some point and allow him to earn his $2.5MM salary for the coming season.

Ginobili’s departure will open up a spot on the Spurs’ projected regular season roster — with the veteran guard no longer in the mix, the club has just 13 players on fully guaranteed contracts, so there will be at least one spot up for grabs, if not two. It’s not yet clear if San Antonio will make any roster moves to fortify its backcourt in the wake of Ginobili’s retirement.

According to the Spurs, Ginobili will speak to the media about his retirement decision at some point before training camps begin, but it won’t happen this week.

Manu Ginobili has yet to make any decisions about his future, but he’s seriously weighing the possibility of retiring, reports ESPN’s Adrian Wojnarowski. According to Wojnarowski, Ginobili will meet with Spurs head coach Gregg Popovich in the coming days to discuss his future.

Ginobili, who still has one year left on his contract with San Antonio, has been working out at the team’s practice facility in preparation of the 2018/19 season, but has yet to commit to returning, Wojnarowski notes (via Twitter). He has been a Spur since the 2002/03 season, winning four championships during his time with the organization.

If Ginobili does decide to play for another year, he’d be in line for a $2.5MM salary in the final season of the two-year contract he signed with the Spurs last summer. The club remains hopeful that the 41-year-old will decide to keep playing, and is giving him all the time he needs to make a decision, league sources tell Wojnarowski.

Although Ginobili’s best days are behind him, the NBA’s second-oldest player continued to be an effective part-time contributor in 2017/18, averaging 8.9 PPG, 2.5 APG, and 2.2 RPG in 65 regular season contests (20.0 MPG) for the Spurs.

Currently, the Spurs have 14 players on guaranteed salaries on their books, including Ginobili, so if the veteran guard retires, it would create an opening for another player to make the regular season roster.