Former NBA star Dwyane Wade has purchased a minority ownership stake in the Jazz, according to ESPN’s Adrian Wojnarowski, who reports that Wade plans to “take an active role in the franchise and region.” While it’s unclear how sizeable Wade’s share is, Wojnarowski says that NBA rules prevent an ownership stake from being smaller than 1%. 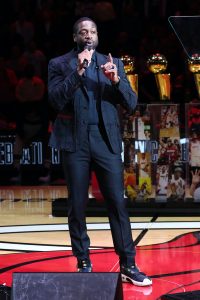 The Jazz confirmed Wade’s investment in a press release.

Wade is joining an ownership group led by Ryan Smith, who purchased a controlling stake in the Jazz from the Miller family in 2020. According to Wojnarowski, Wade met Smith shortly after his retirement as a player in 2019, and the two became fast friends.

“It wasn’t like we wanted more partners; that wasn’t what we were trying to do,” Smith told ESPN. “I want to work with Dwyane on and off the court, on the business side, and so do our partners — because of who he is as a human being and what he’s accomplished. Those are the kinds of people you want around.”

Wade, who won three championships as a member of the Heat, has long talked about his interest in joining an NBA ownership group. While Miami would be an obvious fit, Wade didn’t say whether he and the Heat had serious discussions about the possibility, per Wojnarowski.

Heat owner Micky Arison said in a pair of tweets that he and Wade had previously discussed the idea of having him join the team’s ownership group, but that the veteran guard wasn’t prepared to commit at that time. Arison wished Wade “good luck and much success” with the Jazz, adding that he’ll always consider him a “Heat lifer.”

“The respect that I have for that organization will not go anywhere, the love that I have for the (Heat) fans — that goes nowhere,” Wade said. “But this is about the next phase of my life as an investor, a businessman, an entrepreneur. For me, this is an opportunity to grow.”

Wade envisions having a role in the basketball side of the franchise, according to Wojnarowski, who notes that the former Heat star is good friends with Donovan Mitchell. Participating in free agent meetings or counseling individual players are ways that Wade could become involved with the club, Woj adds. The 39-year-old also hopes to contribute more than just his basketball knowledge.

“Unfortunately, people in my community don’t get this opportunity, and I do not take it lightly to have this opportunity,” Wade said. “To make real change, this is where you have to be — at the top — and Ryan knows that. I’m thankful for him, and I know too that I bring a lot to this partnership outside of just my basketball knowledge and skills.”

Carmelo Anthony, Avery Bradley, Sterling Brown, Donovan Mitchell and Karl-Anthony Towns are the players chosen to serve on the league’s Social Justice Coalition Board, according to The Athletic’s Shams Charania (Twitter links).

A number of team owners around the NBA are feeling the financial effects of the coronavirus pandemic, as Brian Windhorst of ESPN.com writes. Rockets owner Tilman Fertitta, for instance, has seen business fall off precipitously at his restaurants, hotels, and casinos, while Heat owner Micky Arison has had to temporarily shut down his Carnival Cruise Lines.

While some team owners have been hit harder than others by the effects of COVID-19, there’s an expectation that the pandemic will have a league-wide impact on spending this offseason, as Windhorst writes. Some teams may have to make difficult financial decisions that could result in unexpected player movement.

“With few exceptions, no one wants to make long-term commitments right now,” one general manager told ESPN. “You can already feel it coming.”

In addition to the teams that may feel pressure to dump pricey contracts or avoid expensive free agent commitments, some clubs may face financial constraints in the draft. Although selling second-round draft picks remains fairly common, no NBA team has sold a first-round pick since the Nuggets did so with the No. 27 selection in the 2013 draft, according to Windhorst. Some people around the league believe that teams will consider the possibility again in 2020.

“I suspect first-round picks will be for sale in this draft,” a team executive said. “We haven’t really seen that in a decade.”

Here are a few more noteworthy details and quotes from Windhorst’s examination of NBA teams’ finances:

Heat, Wolves Among Latest To Provide Aid To Arena Workers

The Heat and AmericanAirlines Arena announced on Wednesday that they’ll be providing financial assistance to team and arena part-time staffers who have lost work as a result of the coronavirus pandemic, writes Ira Winderman of The South Florida Sun Sentinel.

Heat owner Micky Arison‘s foundation will be donating an additional $1MM to establish an initiative aimed at aiding employees and addressing other community needs in the coming months, Winderman adds.

Timberwolves owner Glen Taylor also announced this week that he’s pledging $1MM of relief to part-time workers at the Target Center, as Chris Hine of The Star Tribune details.

Miami and Minnesota join most of the rest of the NBA’s teams in having announced plans to assist their part-time arena workers displaced by the hiatus. A small handful of clubs, including the Jazz and Thunder, have yet to announce a formal plan or confirm that plans are in motion, but that isn’t to say that those teams won’t implement a program as well.

As Andy Larsen of The Salt Lake Tribune writes, Jazz center Rudy Gobert pledged $200K to part-time arena employees in Utah, but the team has yet to inform its 800+ part-time workers how that donation will be used or whether the franchise itself will be compensating its arena employees for lost games in any way — currently, staffers are only being paid for events they actually worked, according to Larsen, who notes that the Jazz ownership group seems “focused on job placement for their part-time employees, rather than subsidies.”

Don’t read too much into Heat owner Micky Arison’s “look forward to seeing in camp” tweet to Chris Bosh, cautions Ira Winderman of The Sun-Sentinel. Bosh was expected in camp regardless of his immediate playing status, and he still must pass a team physical before being cleared for any action. Bosh’s health and future with the Heat remain uncertain after missing the end of the past two seasons with blood clots, and Winderman suggests that Miami has few options with the veteran power forward and his hefty contract unless there is “an overwhelming consensus” that his NBA career is over.

There’s more news out of Miami: