If the Raptors become sellers at the trade deadline, what could they get in exchange for Fred VanVleet or Gary Trent Jr.? How about Pascal Siakam or OG Anunoby? Eric Koreen comes up with hypothetical trades for all four players in a pair of articles for The Athletic, and his colleagues evaluate whether opposing teams would accept them.

Jovan Buha believes the Lakers would agree to a deal for VanVleet if the Raptors wanted Patrick Beverley, Kendrick Nunn, Max Christie and a 2027 first-round pick. As for the team’s All-NBA forward, Joe Vardon thinks the Grizzlies would package Tyus Jones, Danny Green, Jake LaRavia, Ziaire Williams, 2023, 2025 and 2027 first-round picks, a 2024 first-rounder (via Golden State), and a 2024 second-rounder (via Toronto) in exchange for Siakam.

Otto Porter Jr. won’t play again in 2022/23, according to the Raptors, who announced today in a press release that the veteran forward has undergone surgery on his left foot and will be sidelined for the rest of the season. 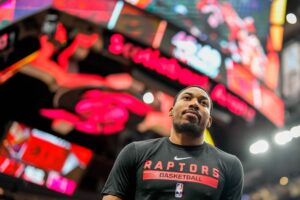 “This was a tough decision for Otto,” Raptors general manager Bobby Webster said in a statement. “He had hoped to avoid surgery, but ultimately a decision had to be made to ensure his long-term health. We look forward to his healthy recovery.”

After winning a championship ring as a key rotation player for the Warriors last season, Porter signed a two-year, $12.3MM contract with the Raptors as a free agent. However, his first year in Toronto has essentially been a write-off.

Porter’s made his Raptors debut on November 2 after recovering from a hamstring strain. Just 12 days later, on November 14, the 29-year-old exited a game early due to a left foot ailment, referred to as a dislocated toe. He hasn’t played since and appeared in just eight games in total, averaging 5.5 PPG and 2.4 RPG in 18.3 MPG.

Porter’s lost 2022/23 season makes it a virtual lock that he’ll exercise his $6.3MM player option for next year.

The Raptors, meanwhile, have until January 15 to apply for a disabled player exception, which would be another tool at their disposal as they consider possible roster moves. A DPE for Porter would be worth $3MM (half of his $6MM salary) and would give Toronto the ability to sign a player to a rest-of-season contract worth up to that amount or to acquire a player (via trade or waiver claim) on an expiring contract. It would not open up an extra roster spot, however.

This January will be one of the Raptors‘ most important regular season months in the last decade, according to Eric Koreen of The Athletic, who writes that Toronto’s year could begin one of two ways — either the team starts playing better and begins to fulfill its promise, or its struggles continue and Masai Ujiri will have to seriously consider whether to break up the Raptors’ core.

The crucial month got off to a disappointing start on Monday as the Raptors lost 122-114 to the Pacers in Indiana, falling to 16-21 on the season. It’s the type of game Toronto will need to start winning more often than not, but Indiana looked like the deeper and better team on Monday, says Koreen.

The Raptors’ schedule leading up to the trade deadline is favorable, as Koreen writes, with 14 of 19 games against teams currently in either play-in or lottery position. They’ll also play their next six games at home, so if they’re going to make a move up the standings, it will probably need to start soon.

Here’s more out of Toronto:

Raptors’ Anunoby Expected To Miss At Least One Week

After missing Sunday’s game in Orlando due to left hip soreness, Raptors forward OG Anunoby is expected to remain on the shelf for another week before being reevaluated, tweets Eric Koreen of The Athletic.

According to Koreen, imaging on Anunoby’s hip injury didn’t show anything “troubling,” so it sounds like it shouldn’t be a long-term problem. Still, the timing isn’t great for the injury-plagued Raptors, who are already missing two other rotation players in their frontcourt.

Veteran forward Otto Porter Jr., who is dealing with a dislocated toe, visited with a specialist and it was determined that surgery isn’t necessary at this point, per Josh Lewenberg of TSN.ca (Twitter link). However, head coach Nick Nurse expects Porter to be sidelined for another month, Lewenberg adds.

Meanwhile, forward/center Precious Achiuwa has done some light on-court work in practice as he recovers from an ankle injury and is said to be making progress. But Toronto still doesn’t anticipate having him back in action until sometime in January, tweets Lewenberg.

On the plus side, after missing the last four games due to a right ankle sprain, Raptors forward Juancho Hernangomez practiced on Tuesday and should be activated for Wednesday’s game vs. Sacramento, tweets Michael Grange of Sportsnet.ca. With Anunoby, Porter, and Achiuwa all unavailable, Hernangomez figures to reclaim a spot in the club’s regular rotation.

Raptors forward Otto Porter Jr. is scheduled to meet next week with a specialist about his dislocated toe, head coach Nick Nurse said on Friday (Twitter link via Michael Grange of Sportsnet.ca). The hope is that the appointment will bring some good news on Porter’s potential return to action — he has been sidelined since November 14 due to the injury and still isn’t doing any on-court work.

Meanwhile, Raptors big man Precious Achiuwa is targeting late December for his return to the court, Grange adds. Achiuwa has been on the shelf since November 9 after sustaining partial ligament tears in his right ankle.

Trail Blazers guard Gary Payton II, who is recovering from abdominal surgery, is getting closer to a return, but isn’t quite ready to make his regular season debut, writes Aaron Fentress of The Oregonian.

“He’s still progressing,” head coach Chauncey Billups said after the Trail Blazers practiced on Monday. “Not ready to play yet. He’s doing more and more. I don’t have a timeline.”

As Fentress details, Payton traveled with the Blazers during their six-game road trip that concluded on Saturday and said last week that he was “close.” However, the team is taking a cautious approach and wants to ensure that the veteran guard is 100% healthy before he takes the court.

Payton signed a three-year, $26MM+ contract in July with the Blazers, who have played well even without one of their top offseason additions available. Their 9-4 record puts them in a tie for the No. 1 seed in the Western Conference.

Here are a few more health-related notes from around the NBA:

The Nets may be having second thoughts about hiring Ime Udoka as their next head coach, tweets NBA reporter Marc Stein, who hears that “strong voices” are warning owner Joe Tsai about the potential move. Udoka emerged as the “strong frontrunner” for the job almost immediately after the decision to part ways with Steve Nash was announced last Tuesday.

However, league sources tell Stein that people close to Tsai are warning him to reconsider any commitment to Udoka considering the atmosphere of turmoil in Brooklyn. Udoka would bring additional baggage after being suspended for the season as Celtics head coach following an affair with a team staffer.

Jacque Vaughn continues to serve as interim coach and has led the Nets to a 2-1 record, with back-to-back road wins over the weekend.

The Raptors haven’t missed a beat with All-Star point guard Fred VanVleet (back) unavailable for the last two games, recording blowout wins over Atlanta and San Antonio. Reigning Rookie of the Year Scottie Barnes has been the team’s primary de facto point guard, recording a season-high eight assists on Monday vs. Atlanta and five more in San Antonio on Wednesday.

Barnes has displayed improvement as both a shooter and a play-maker in the early parts of the 2022/23 season, showing that his development after last year’s impressive debut is right on track, according to Eric Koreen of The Athletic.

As Michael Grange of Sportsnet.ca writes, the Raptors’ strong performances this week – along with Barnes’ strides as a play-maker – are proof that the team should be able to cut back VanVleet’s minutes a little when he returns, even without a reliable traditional point guard on the depth chart behind him.

VanVleet averaged a team-high 37.9 minutes per game last season and was slowed by injuries by the time the playoffs rolled around. In his first six contests this season, he averaged 38.0 MPG.

Jimmy Butler has been ruled out for Wednesday’s game vs. Sacramento due to hip tightness, the Heat announced (via Twitter). It will be Butler’s first missed game of the 2022/23 season after being sidelined for 25 contests last season.

Here are some more injury-related notes from around the NBA:

Veteran forward Thaddeus Young has played sparingly for the Raptors and he’s surprised by his lack of playing time, he told Josh Lewenberg of TSN.

“It’s tough,” he said. “It’s definitely a tough situation to be in but I’ve just got to bear with it and continue to be there for my teammates, continue to trust in what I’m doing as a player, and hopefully when the time comes I’ll be ready to go out there and take care of business.”

Young has only appeared in four games, averaging eight minutes when he’s seen the floor. Young is signed through next season but only $1MM of his 2023/24 salary is guaranteed.