The Nets are one of the more active teams on the trade market, sources tell Kevin O’Connor of The Ringer.

Joe Harris, Seth Curry and/or Patty Mills could potentially be on the move due to their short-term salaries and reduced roles, O’Connor notes. Beyond that, they could only dangle young players Day’Ron Sharpe and Cam Thomas, their 2028 or 2029 first-round pick, and a future first-rounder from Philadelphia in 2027 or 2028.

As the Nets try to move past a season of distractions and a summer filled with chaos, Patty Mills already senses a “night and day different feeling,” according to Peter Botte of The New York Post. The 14-year veteran won a title with the Spurs early in his career and understands the importance of a strong team culture.

“Look, I believe in all of that stuff,” Mills said. “I think that it’s always been a part of who I am and just enjoying being around teammates and getting to know them a lot more. Maybe that comes from my Australian background on the Australian teams, but then to see it at a professional, elite level in San Antonio kind of took that to a whole other level. But trying to get to be the last team standing or just trying to do everything possible to do that, it starts with those relationships.”

Mills was a free agent over the summer and could have moved on, but he opted to re-sign with Brooklyn for two more years. In addition to his role in shaping the culture, Mills is an accomplished shooter off the bench who can play either guard position.

“He’s a successful piece, he knows what it takes to be in an organization, he knows what it’s like to build trust and also do it at the highest level,” Kyrie Irving said. “You need a guy like Patty Mills just simply to have the locker room synergized, but he also can give you minutes and quality play and can think out there for the young guys, as well as give us some veteran leadership.”

JULY 10: The Nets have announced in a press release that they have officially re-signed Mills. 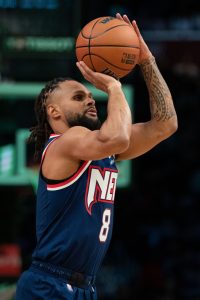 JULY 7: The Nets have officially re-signed Claxton, the team announced in a press release.

JUNE 30: The Nets are re-signing a pair of key rotation players from their 2021/22 squad, according to Adrian Wojnarowski of ESPN (Twitter links), who reports that center Nic Claxton is receiving a two-year, $20MM contract, while guard Patty Mills gets a two-year, $14.5MM deal.

Brooklyn had Claxton’s Bird Rights and won’t need to use another cap exception to sign him. Mills’ deal appears to be the maximum amount he can receive on a Non-Bird deal, as Yossi Gozlan of HoopsHype tweets.

Claxton, 23, was 31st pick of the 2019 draft after two collegiate seasons at Georgia. Injuries have played him throughout his three NBA seasons, but he’s shown to be a switchable, versatile defender when healthy. Brooklyn issued him a qualifying offer a couple of days ago, making him a restricted free agent.

In 47 games last season, including 19 starts (20.7 MPG), Claxton averaged 8.7 PPG, 5.6 RPG and 1.1 BPG while shooting 67.4% from the floor and 58.1% from the free-throw line. ESPN’s Brian Windhorst and Bleacher Report’s Jake Fischer previously reported that Claxton was likely to return to Brooklyn.

Mills has played 13 seasons in the league, spending his first couple of seasons with Portland before a 10-year run with the Spurs that included an NBA Championship in 2014. The veteran guard also led the Australian national team to a Bronze Medal at the Tokyo Olympics last summer.

Wojnarowski and Brian Lewis of The New York Post said last night that Mills hadn’t ruled out a return to the Nets after declining his player option to become a free agent. Mills isn’t quite as quick as he once was and is limited defensively despite giving solid effort, but he holds a career three-point percentage of 38.9%, which is always valuable.

On a Spotify Live appearance with Marc Stein, Jake Fischer of Bleacher Report said he has heard there’s mutual interest between the Kings and Malik Monk in free agency (hat tip to Talkin’ NBA). Monk played college ball at Kentucky with De’Aaron Fox, so there’s obviously a connection between the two athletic guards.

The Kings could offer Monk the mid-level exception, projected to be worth about $10.5MM next season, which is significantly more than the Lakers can offer (taxpayer MLE — $6.5MM).

Here are more rumors ahead of free agency, which kicks off in less than 17 hours:

Last season was the 13th of Mills’ lengthy NBA career, spending his first couple of seasons with Portland before a 10-year run with the Spurs that included an NBA Championship in 2014. The veteran guard also led the Australian national team to a Bronze Medal at the Tokyo Olympics last summer.

While Mills isn’t quite as quick as he once was, he holds a career three-point percentage of 38.9% and figures to draw plenty of interest from contending teams. He should receive a contract similar in annual value to the one he declined (taxpayer mid-level exception), but he’ll likely be looking for a multiyear deal to maximize his earnings.

Asked on Tuesday about what the Raptors‘ offseason might look like, general manager Bobby Webster suggested it might be a fairly quiet summer in Toronto, but didn’t rule out the possibility of that changing if favorable trade opportunities arise.

“You look at it two ways: We have a couple free agents, we have a mid-level (exception). Maybe in that sense it’s just adding to the group,” Webster said, according to Michael Grange of Sportsnet.ca. “Obviously if you have trade discussions, it’s different. There are kind of just two different paths you can go.”

OG Anunoby has been at the center of some trade rumors this offseason, with one report indicating the Raptors forward wants a bigger role on offense going forward. Asked about Anunoby, Webster dismissed the idea that there’s any real tension between the team and the 24-year-old, but he also didn’t exactly slam the door on the idea that Anunoby could be traded.

“We have great communication with OG,” Webster said. “He’s even up here (in Toronto) now. For one, it doesn’t make sense to comment on all the trade speculation. If we talked about every call we got or every player we discussed we’d be here for hours, so I don’t think it’s all that noteworthy.”

Nets guard Patty Mills has won this season’s Sportsmanship Award, according to a league press release. The annual award is designed to honor a player who best represents the ideals of sportsmanship on the court.

Each NBA team nominated one of its players for the award and current players selected the winner from the list of six finalists. Bam Adebayo, Mikal Bridges, Darius Garland, Jeff Green and Jaren Jackson Jr. were the other finalists.

The Nets don’t know when Ben Simmons will be available, but Patty Mills expects him to make an immediate impact whenever he does come back, writes Nick Friedell of ESPN. Simmons hasn’t played yet this season due to a standoff with Sixers management, mental health issues and soreness in his back, but Mills believes he’ll be a difference maker.

“He’s going to be a threat either way,” Mills said. “On ball, off ball — whether he’s handling the ball, whether he’s off the ball as a screener, I think he’s such a threat that he’s going to draw a lot of attention. So I think given his IQ and the way he can pass the ball and handle the ball, that makes us better at his bare minimum. So, obviously, where he’s the biggest threat is in an open-court situation with people, especially shooters around him. But, like I said, a bare-minimum Ben Simmons makes this team a whole lot better as well.”

General manager Sean Marks said this week there’s “no real timetable” for Simmons to resume playing, although it will likely be two more weeks at minimum. Simmons hasn’t participated in a full practice since the February 10 trade that brought him from Philadelphia, but Mills said he has been able to learn from his new teammates while sidelined.

“We’re doing a lot of talking,” Mills said. “A lot of conversations, meaning the group, a lot of film, a lot of walk-through stuff. So he’s there for all of it; he’s there for the entire practice. And then he’s doing his part with his shooting coach and physio and whatever that looks like. But as far as every team thing goes, he’s at everything.”

Poll: Who Will Win The 2022 Three-Point Contest?

There are two rounds in the competition; the three highest scores from the first round advance to the championship round, and the highest scoring competitor in the championship round will become the victor. A first-time winner will be crowned this year, as only Young and LaVine have made prior appearances in the event, this being Young’s second attempt and LaVine’s third.

Each participant gets 70 seconds to attempt a total of 27 shots — five from each of the traditional racks located at the corners, wings, and top-of-the-key, and two “Dew Zone” locations six feet behind the arc. The deep racks feature just one ball each, but they’re worth three points apiece.

Young, VanVleet, Lavine and Towns are all pulling double-duty, as the four players were all selected to the All-Star game. Bane is as well, as he’s a member of Team Isiah for the Rising Stars event.

However, VanVleet leads all competitors in makes (4.0) and attempts (10.0) per game by a considerable margin — McCollum is second with 3.1 makes and 8.0 attempts.

What do you think? Who will win this year’s Three-Point Contest? Will Towns defy the betting odds and take home the crown? Will LaVine triumph in his third attempt?

The Nets will face the Celtics next Thursday in their first game after the All-Star break. Don’t expect Kevin Durant to be in uniform for that game, according to Brian Lewis of the New York Post. Coach Steve Nash said Durant will be eased back into action from his knee injury.

“I’m not like, ‘He’s going to play right when the break ends.’ There’s obviously a small chance, but we want to be really careful because a setback would be tough when there are 20 or so games left,” Nash said. “We don’t want to jeopardize there and have a setback where he misses another six to 12 games, so I think we’ll be cautious coming out of the break. There’s a chance he could play, but I think it’s more likely that we don’t get our hopes that he’s going to play the first game out of the break.”