The league has announced its 2023 All-Star reserves during a pregame broadcast on TNT, as voted on by NBA head coaches. As usual, the list of 14 selections featured some interesting surprises. 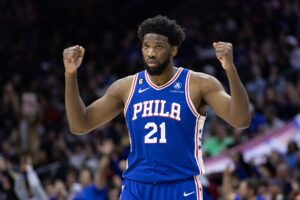 Holiday, who is making his second overall All-star appearance this year, last earned an All-Star nod a decade ago while playing for Philadelphia.

Randle will receive a $1.2MM salary bonus as a result of being named an All-Star this season, according to Bobby Marks of ESPN (Twitter link). Marks adds (via Twitter) that Holiday will get a $324K bonus. And as long as he appears in at least 65 contests this year, Brown will earn a $1.55MM bonus after having qualified for the All-Star game, Marks tweets.

Among the most notable omissions in the East were a handful of point guards: the Knicks’ Jalen Brunson, the Hawks’ Trae Young, the Cavaliers’ Darius Garland, and the Sixers’ James Harden. Miami swingman Jimmy Butler also missed out. Young, Harden and Butler all made the cut last season.

Being named to the All-Star team again this year will earn Sabonis a $1.3MM bonus, per Marks (Twitter link).

Gilgeous-Alexander, Markkanen and Jackson are the lone first-time All-Stars among these 14 picks.

All-Star weekend tips off on February 17 in Salt Lake City. Los Angeles power forward LeBron James and Milwaukee power forward Giannis Antetokounmpo, the captains of their respective conferences, will draft their teams ahead of the 2023 All-Star Game on Sunday, February 19.

After missing Monday’s game in Brooklyn due to left foot/ankle soreness, Lakers star LeBron James has been listed as questionable to play on Tuesday in New York, tweets Broderick Turner of The Los Angeles Times.

While that status indicates that his availability for tonight remains up in the air, sources tell ESPN’s Dave McMenamin (Twitter link) that LeBron will play against the Knicks. He’s just 117 points away from catching Kareem Abdul-Jabbar as the NBA’s all-time leading scorer.

As the Clippers explore the trade market for potential backcourt or frontcourt upgrades, they continue to rebuff inquiries on fourth-year guard Terance Mann, Marc Stein reports in his latest Substack story.

Entering the season, the decision on the Clippers’ starting point guard came down to Reggie Jackson vs. John Wall, but with Jackson’s role cut back and Wall injured, it’s Mann who has started the club’s last nine games at point guard.

One team source who spoke to Law Murray of The Athletic suggested that there’s a belief Mann could be the Clippers’ starting point guard beyond this season. However, it’s unclear how enthusiastic head coach Tyronn Lue is about using Mann in that role. As Murray explains, Lue views Mann as more of a small forward and barely used him in some first-half games. The Clippers’ coach also likes having a more traditional point guard in his rotation, Murray adds.

A return to the floor for Suns starting power forward Cameron Johnson appears to be imminent, reports Duane Rankin of The Arizona Republic. Johnson has been sidelined for Phoenix since November 4 with a torn right meniscus that required surgery.

“Just sometime when I get back from the [team’s just-wrapped road trip], but I feel pretty good,” Johnson said when asked about his return timeline. “Taking it one day at a time right now, but I’m looking forward to getting back soon, very soon.”

In his eight healthy games this year, Johnson has averaged 13.0 PPG, 3.4 RPG, 1.8 APG and 1.1 SPG. The Suns have gone 15-21 since Johnson’s injury, though other major absences to Phoenix players have played a role in that record, too.

The Lakers have long been linked to forward Bojan Bogdanovic — back when he was still on Utah and in the months since he was traded to Detroit. In an article about potential deadline buyers and sellers with Chris Mannix, Howard Beck of Sports Illustrated hears that the Lakers and Pistons “have discussed a deal that would include both Bogdanovic and Nerlens Noel.”

Rumors last month indicated that the Lakers offered Patrick Beverley, Kendrick Nunn and a protected first-round pick for Bogdanovic, but this is the first time we’ve seen them linked to Noel this season. Adding his $9.24MM salary to that framework complicates a trade from a salary-matching perspective — the Lakers would have to add three players on minimum salaries.

Replacing Beverley and Nunn with Russell Westbrook‘s $47.1MM expiring deal would mean the Pistons would have to add more salary, so more players would have to be involved in either scenario.

The Warriors provided updates (via Twitter) on several injured players on Wednesday evening. Star guard Stephen Curry will have his left shoulder reevaluated on Saturday, which is in line with what the team previously announced.

Starting forward Andrew Wiggins has begun practicing and is ramping up his conditioning after missing the past 14 games due to a strained right adductor and then an illness. He will be reevaluated later this week, per the team.

The Warriors also announced that JaMychal Green (right lower leg infection), Jonathan Kuminga (right foot sprain) and James Wiseman (left ankle sprain) will all be out at least one more week — that’s when they’ll be reevaluated.

Clippers forward Paul George was limited to playing just five minutes in the fourth quarter of Monday’s loss to Miami after tweaking his right hamstring, writes Ohm Youngmisuk of ESPN.

George said after the game that he’ll receive treatment on the injury on Tuesday and see how it responds. It remains to be seen whether he’ll be available for the team’s brief road trip to Denver on Thursday and Minnesota on Friday.

As Youngmisuk observes, George missed seven games in late November and early December after straining that same right hamstring, so it has been a recurring issue this season for the Clippers star.

“Often hamstrings are very, very serious injuries,” George said on Monday, per Youngmisuk. “So, I thought the first approach when I was dealing with my hamstring (during the previous absence) was just good, smart. We waited until it felt better and I didn’t have any issues, once I returned. “We won’t know more until (Tuesday). But my job is to do the best that I can and go from there.”

The Clippers have been relatively cautious this season with health issues, especially those affecting George and Kawhi Leonard, who missed Monday’s game due to a non-COVID illness. The team is taking the long view and its top priority to be at full strength entering the postseason, so we likely won’t see George or Leonard back in action until they’re feeling 100% or very close to it.

The Clippers were able to practice at full strength on Tuesday, a rarity for a team that has dealt with numerous injuries, Andrew Grief of the Los Angeles Times notes. That includes Paul George, Norman Powell, Ivica Zubac and Reggie Jackson, who have missed games this month due a variety of ailments.

“It’s exciting to finally actually have our whole team almost complete, be ready to play and just try to get rotations down and see what guys plays good with who,” Clippers coach Tyronn Lue said. “And so we’re starting all over again, but it’s a good feeling to have your whole team back.”

Warriors forward Andrew Wiggins, who has missed the last five games due to a right adductor strain, was cleared on Thursday to resume participating in practices and shootarounds, according to the team (Twitter link).

However, Wiggins will be unavailable for a sixth consecutive game when the Warriors visit Philadelphia on Friday and Draymond Green (right quad contusion) will be out as well, per the NBA’s latest official injury report. Klay Thompson is listed as questionable due to left knee soreness, so Golden State is at risk of being without four starters — Stephen Curry, of course, is expected to miss multiple weeks as a result of a shoulder injury.

As Anthony Slater of The Athletic (Twitter video link) relays, Curry spoke to reporters today about his shoulder and expressed relief that he won’t have to undergo surgery, which might’ve forced him to miss several months. Asked if surgery is a possibility after the season, the Warriors star didn’t rule it out, but said that’s not the plan for now (Twitter links via Slater).

While there was some initial trepidation this fall about how former MVP Russell Westbrook might respond to being asked to come off the bench on a full-time basis, the Lakers guard appears to have chosen to embrace the change, writes Chris Mannix of SI.com. NBA analyst and former head coach Stan Van Gundy is among those impressed by how Westbrook has handled his new role.

“From the outside, I don’t sense resistance on his part this year,” Van Gundy told Mannix. “I don’t see him pouting about coming off the bench. He’s not making passive-aggressive comments in the media. I see acceptance from a guy who’s trying to make it work.”

“It’s just that sometimes it’s about the situation,” Wade said to Mannix. “So at this age, at this time, with this team right now, the best situation for Russ was to come off the bench and be able to have the freedom that he has to just be Russ. To not have to overthink all the time about, ‘O.K., LeBron. O.K., I got to get the ball to AD. O.K., I got to shoot this. O.K., I don’t want to shoot.’ He doesn’t have to think as much. Russ has now put himself in a better situation by coming off the bench.”

One high-ranking team executive who spoke to Mannix believes Westbrook’s adjustments will change how teams view him and will result in more teams pursuing him when he reaches free agency in 2023.

In the short term, it has also led to his name coming up in trade rumors less frequently, with some reports indicating the Lakers seem more inclined to hang onto the 34-year-old through this season’s trade deadline rather than surrendering valuable draft assets to move his $47MM+ expiring contract.