Dozier didn’t play much during his first 10 days with Sacramento. He logged just under seven total garbage-time minutes in three blowout victories last week, then didn’t play on Sunday or Wednesday. Still, the Kings – who had lost three of four games before signing Dozier – won all five games with him on the roster, so perhaps the team just doesn’t want to change what seems to be working.

Dozier, 26, appeared in 105 games across five seasons for the Thunder, Celtics, and Nuggets from 2017-21, recording averages of 6.4 points and 3.0 rebounds in 18.0 minutes per night during that time. He’s just returning from an ACL tear that he suffered in December 2021.

The Kings will take on another $105,522 cap hit for Dozier’s second 10-day contract, while he’ll earn $122,602. Sacramento could officially complete the signing later today or wait until Friday — in either scenario, he’d be available for the team’s next five contests.

Dozier signed a training camp deal with the Timberwolves this summer, but did not make the team’s opening night standard roster. Most recently, the 6’6″ swingman had been playing with Minnesota’s NBAGL affiliate, the Iowa Wolves.

Across five NBA seasons with the Thunder, Celtics, and Nuggets, the 26-year-old out of South Carolina holds career averages of 6.4 PPG, 3.0 RPG, 1.8 APG and 0.6 SPG. He tore his ACL in December 2021 while with Denver, and indicated in June of 2022 that he had been cleared to resume all basketball activities.

James Ham of ESPN 1320 Sacramento tweets that Dozier has an ally on the Kings bench. Current Sacramento associate head coach Jordi Fernandez was previously an assistant coach with the Nuggets, with whom Dozier also spent the past three NBA seasons.

Ham adds that the Kings view Dozier as an intriguing two-way option. Sacramento could especially use Dozier’s help on the defensive side of the ball, where the team has been struggling.

LeBron James is disputing the nature of a weekend report by Sam Amick of The Athletic that he’s becoming impatient for Lakers management to upgrade the roster. The story suggests that James was sending a message to the front office with his comments after Saturday’s game, but in a response on Twitter, James said that wasn’t his intention.

“Hey Sam actually my patience isn’t waning,” he wrote. “You make it sound like I’m frustrated when I’m really not. I told you over and over, my job is focused on the guys in the locker room, my job isn’t the roster. That’s the reality of that conversation. And I said what I said with the Upmost respect and calmness cause that’s the mood I’m in! Your welcome! 5 game winning streak.”

While L.A. has climbed back into the playoff race with its recent hot streak, speculation is starting to build around the league that James may want to finish his career somewhere else, according to Sean Deveney of Heavy. Executives have told Deveney that multiple teams are preparing for the possibility that James will try to force a trade this summer, if only so they don’t get caught off guard like they did with Kevin Durant‘s trade request last year.

One executive tells Deveney that the Lakers are hoping to get through this season without trading their first-round picks in 2027 and 2029 and then use their cap room, which could top $30MM, to acquire free agents who would appeal to James, such as Kyrie Irving or Draymond Green. If that doesn’t happen, league executives see the Cavaliers, Heat and Suns as the most likely destinations if James does force his way out.

PJ Dozier will start the season with the Timberwolves’ NBA G League affiliate, the Iowa Wolves, Darren Wolfson of KSTP tweets. Minnesota waived Dozier, who was on an Exhibit 10 contract, on Saturday as the team pared its roster to the 15-man limit. The former Denver wing tore his ACL last December and didn’t appear in any preseason games prior to being waived. Iowa’s opener is in two weeks.

Dozier was signed to an Exhibit 10 contract last month. He spent the last three seasons with the Nuggets, where he averaged 6.7 points, 3.1 rebounds and 1.9 assists per game in 97 games (six starts).

Elleby received an Exhibit 10 contract in early August and appeared in two preseason games. He spent the last two seasons with the  Trail Blazers. Last season, he averaged 5.8 points, 3.9 rebounds and 1.5 assists per game in 58 games.

Lawson held one of the team’s two-way contracts but Minnesota chose to give big man Luka Garza his two-way spot. Lawson signed his two-way deal in July. The Garza signing was officially announced in a press release on Saturday.

Lawson saw action in three preseason games for the Wolves and also played for the Mavericks’ summer league squad, for which he averaged 15.6 PPG and 6.0 RPG in five games.

Given Dozier and Elleby’s NBA experience, it wouldn’t be a surprise if either gets claimed. Dozier returned to basketball activities this summer after tearing his ACL last December.

SEPTEMBER 26: The Timberwolves have officially signed Dozier, finalizing their training camp roster, the team announced in a press release.

The former Nuggets wing tore his ACL in December. He was cleared for full basketball activities in mid-June.

After Dozier was injured, he was traded from the Nuggets to the Celtics in January, then to the Magic at the February trade deadline. Orlando waived him shortly after acquiring him, making him an unrestricted free agent.

New Timberwolves president of basketball operations Tim Connelly is naturally quite familiar with Dozier since he was Denver’s top exec up until this offseason.

Minnesota already had 19 players on its roster — 12 with fully guaranteed salaries, three with partially guaranteed or non-guaranteed standard contracts, two on Exhibit 10 deals, and two more on two-way pacts. Dozier will fill the 20th spot for now.

Terms of Dozier’s contract were not disclosed, but it’s likely to be a non-guaranteed or partially guaranteed contract, giving him the opportunity to fight for a spot on the 15-man opening day roster.

Former Nuggets wing PJ Dozier, who tore his left ACL in November, has been cleared to resume full basketball activities, sources tell Adrian Wojnarowski of ESPN (Twitter link). According to Wojnarowski, Dozier is expected to be ready to go for the start of training camp this fall.

After Dozier was injured, he was traded from the Nuggets to the Celtics in January, then to the Magic at the February trade deadline. Orlando waived the 25-year-old shortly after acquiring him, making him an unrestricted free agent.

Dozier’s ACL procedure occurred on December 7, so it has only been about six months since he went under the knife. Many players who undergo surgery to repair a torn ACL – including Dozier’s former teammate Jamal Murray – take at least a full calendar year to make it back into a game, so teams with interest in signing Dozier this offseason will likely want to take a close look at his medicals.

The Magic have waived combo guard PJ Dozier, who was acquired from the Celtics earlier today, the team announced (via Twitter).

Dozier, who will miss the rest of the season with a torn ACL he suffered in November, was traded along with Bol Bol as a way for Boston to trim salary. Dozier has a $1.9MM expiring contract and will be a free agent this summer.

Dozier played 18 games this season, all with the Nuggets before being traded to the Celtics in January, and averaged 5.4 points, 3.5 rebounds and 1.6 assists per night. He spent the past two and a half seasons in Denver after starting his career with short stays with Oklahoma City and Boston.

1:16pm: The deal is official, according to a press release from the Magic. As expected, the team has waived Moore and Carter-Williams. 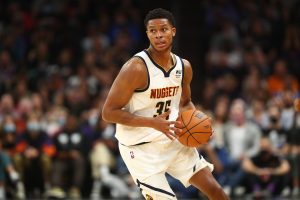 1:00pm: The Magic will acquire the Celtics’ 2028 second-round pick (top-45 protected) in the deal, while Boston will get the Magic’s 2023 second-rounder (top-55 protected), reports Price (via Twitter).

12:12pm: The Magic will waive veteran guard E’Twaun Moore as part of the deal, reports Chris Haynes of Yahoo Sports (Twitter link). Orlando is also cutting Michael Carter-Williams, tweets Khobi Price of The Orlando Sentinel. Both players have been out all season due to injuries.

Brian Robb of MassLive.com confirms (via Twitter) that the second-round pick headed to Boston in the deal will be heavily protected and likely won’t convey.

11:34am: The Celtics have reached an agreement to trade injured players Bol Bol and PJ Dozier to the Magic, according to ESPN’s Adrian Wojnarowski (via Twitter). It’s a cost-cutting move for the Celtics, who will dip below the luxury tax line as a result of the deal.

Bol and Dozier were sent from Denver to Boston earlier this season in a three-team trade, but neither player was part of the Celtics’ short- or long-term plans. Bol underwent foot surgery that is expected to sideline him for most or all of the season, while Dozier is recovering from a surgery of his own to repair a torn ACL and won’t play until 2022/23.

Both players are on expiring deals, with Bol earning $2.2MM this season and Dozier making $1.9MM. Orlando will acquire both players using trade exceptions, while Boston will create a pair of new trade exceptions equivalent to their salaries.

The Celtics now have a pair of open roster spots and will remain out of tax territory even in the unlikely event that Jaylen Brown is named an All-Star replacement and earns a bonus. As Bobby Marks of ESPN notes (via Twitter), the C’s would’ve had a small tax bill of about $2MM if they hadn’t made a move, but they’re now in line to receive a potential eight-figure payout.

While Boston doesn’t have to make any more moves today, Adam Himmelsbach of The Boston Globe (Twitter link) hears that there are still three or four teams in the mix for Dennis Schröder, with one source estimating there’s a 50/50 chance of a deal.

The Magic have a full 15-man roster, so they’ll have to make at least one more move in order to accommodate the incoming players.