There are signs that a breakout season for Celtics power forward Jared Sullinger is forthcoming. The biggest one being that Sullinger has seemingly committed to getting in much better shape this summer. Of course, each summer, there are a plethora of stories about players suddenly in the best shape they’ve ever been in. With Sullinger, however, there seems to be a lot of validity behind the claims.

Celtics head coach Brad Stevens, for one, has heard Sullinger has worked hard. There’s plenty of motivation for Sullinger, who was listed at 260 pounds last season, to get healthier, as Stevens alluded to. 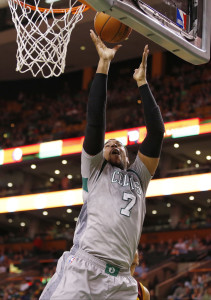 “He’s been working out in a couple different locations,” Stevens said in late July on SiriusXM’s NBA Radio, as transcribed on ESPN Boston. “But everything that I have heard, every time I’ve spoken with him, every time I have spoken to people around him, it sounds like he’s doing great. Hey, he wants to be in the best shape of his life, he wants to be in great condition, and he’s working towards that, and I think he’s excited for a new season to show that’s been his focus and to show off the work that he’s put in to get there.”

Sullinger is eligible for an extension this summer, but Chris Forsberg of ESPNBoston.com wrote in May that serious contract talks are more likely to happen when he becomes a restricted free agent in 2016. Sullinger, who will make $2.3MM next season, is trying to meet Boston’s front office challenge to get in better shape. The challenge specifically came from Celtics president of basketball operations Danny Ainge, who said, “I think he’s hurting the longevity of his career and his play now by not being in as good shape as he can be in.”

Sullinger has until November 2nd to agree to a long-term contract extension. Gary Washburn of the Boston Globe doesn’t believe Sullinger will ink an extension, as Washburn writes that Sullinger’s agent, David Falk, told Washburn in February that an extension wouldn’t be possible unless it was for the maximum — an estimated $85MM. That won’t happen, according to Washburn. So that would mean Sullinger is headed for restricted free agency.

If Sullinger is in better shape — and maintains his conditioning throughout the season — he will likely enjoy a big scoring season, especially considering he has always been thought of by many as a very talented player. With better conditioning, there is reason to believe his jump shooting would be improved because of better leg strength. Still, if he ends up losing too much weight, there’s a chance Sullinger, who has been a good rebounder in the past, loses strength.

Despite the expected rise in the salary cap and the idea that Sullinger could walk after a big season, I do not think it would be wise for the Celtics to extend him mainly because health and injury concerns have followed Sullinger ever since he was drafted in 2012. What’s more, Sullinger could become a valuable trade chip for the Celtics down the road. It seems the Celtics are willing to move him. Boston discussed a package that included multiple draft picks and Sullinger with the Knicks before the draft. Another thing to keep in mind is that the Celtics inked power forward Amir Johnson and acquired David Lee, who might be better long-term fits than Sullinger. With Sullinger reportedly looking for the maximum and considering the team’s depth chart, it seems unlikely to me that the Celtics extend him.

Do you think the Celtics and Sullinger will do an extension, and if so, how much do you think he’ll get? Leave a comment to tell us.