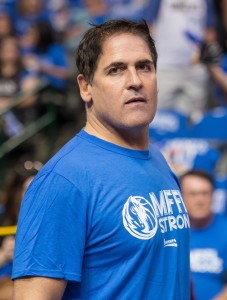 Teams across the NBA are loaded this time of year with players who signed as undrafted free agents. The impending addition of former Rutgers power forward Kadeem Jack to the Pacers will make it 44 players on NBA rosters who went undrafted this year. They outnumber the 2015 draftees, of whom only 41 are under contract with NBA teams. A few GMs reportedly believe a decent chance exists the NBA draft will expand beyond two rounds once the D-League has 30 teams, but Mavericks owner Mark Cuban has an idea for a different sort of draft entirely, as he explained when Hoops Rumors asked him what he would change about NBA free agency.

“I would have a supplemental draft every summer for undrafted free agents of the current and previous 3 years,” Cuban wrote in an email to Hoops Rumors. “If you are more than 3 years out you are not eligible and just a free agent.”

The supplemental draft would have two rounds, and teams would hold the rights to the players they select for two years, Cuban added. Players can opt out and choose not to make themselves eligible, but those who get picked would receive fully guaranteed minimum-salary contracts when they sign, according to Cuban’s proposal.

“That would make it fun a few weeks after the draft and pre-summer league,” Cuban wrote. “It would prevent some of the insanity that goes on to build summer league rosters.”

Cuban said that he’s raised the idea in some conversations, though no formal discussions have taken place. Instituting a second-chance draft like this would require approval from the players association and probably necessitate changes to the language in the collective bargaining agreement. Commissioner Adam Silver and union executive director Michele Roberts are already talking, if only informally, about labor issues, with both sides having the power to opt out of the labor agreement in 2017, so an idea like this could come to the table in the months ahead.

The players would certainly like the idea of fully guaranteed deals, since most of the undrafted free agents who would be eligible for Cuban’s supplemental draft and who signed this summer have only partial guarantees, at best. They’d also probably like that they’d be able to opt out of the supplemental draft entirely, since it would preserve their ability to negotiate with multiple teams if they want to. That power in many cases puts undrafted players in more favorable positions than the ones their second-round brethren are in, so part of the intrigue of the supplemental draft would be seeing which players would be willing to sacrifice that flexibility in exchange for the chance at a guaranteed contract.

I’d speculate that some teams would want to tweak the proposal so that they have the ability to opt out, too. That would come in handy for teams that enter July with a high volume of guaranteed contracts already on the books. Of course, teams wouldn’t have to sign the players they selected immediately, just as with the conventional draft, though in the stipulations Cuban laid out, they would only have two years to bring supplemental draftees onto the roster before their draft rights expire. The existing draft allows teams to roll over a player’s draft rights in perpetuity as long as they keep making non-guaranteed required tenders every year.

The proposal would take some of the hassle out of summer league for teams, and it would also further legitimize summer league, since it would more closely tie summer league rosters to camp and regular season rosters. It would involve not just players freshly passed over in the draft but those who’d already played professionally for a few years, too. Cuban didn’t say whether players with NBA experience would be involved, though presumably players under NBA contracts or with Bird rights tied to an NBA team would be excluded.

Cuban’s idea is somewhat reminiscent of Major League Baseball’s Rule 5 draft, which involves overlooked prospects and requires teams to keep draftees on big-league rosters. Cuban answered affirmatively when Hoops Rumors asked if the current system allowed for enough creativity in structuring deals, but clearly, he wouldn’t mind seeing an extra layer of intrigue to the NBA’s offseason. Time will tell if the other owners and the players are willing to go along.

What do you think of Cuban’s idea for a supplemental draft? Leave a comment to share your take on his plan and any proposals of your own.