The Over-38 rule, formerly known as the Over-36 rule under the NBA’s previous Collective Bargaining Agreement, closes a loophole in the CBA, preventing teams from paying older free agents more than their cap room or cap exceptions allow. It also limits the ability of players in their mid- to late-30s to sign long-term contracts.

The original purpose of the Over-38 rule was to block teams from circumventing the salary cap by offering a contract that extends beyond when the club expects a player to end his career. For instance, if a team wanted to offer a 37-year-old free agent a two-year contract worth $35MM but only had the mid-level exception available, the team could have made it a four-year offer in order to fit the average annual salary within the MLE, knowing that the player could collect his third- and fourth-year salaries after retiring. The Over-38 rule prevents that.

The Over-38 rule generally takes effect when a free agent signs a long-term contract that extends beyond his 38th birthday. In these cases, the salary in the year(s) after the player turns 38 is considered deferred compensation, and is applied to the years earlier in the contract, when that salary is actually being earned. In most cases, this prevents the team from completing the contract using the necessary cap room or exception. 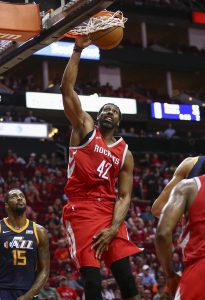 The Over-38 rule is a little complicated, so let’s use a real-life example to illustrate it. In the summer of 2017, the Rockets and Nene fell victim to the Over-38 rule when they tried to complete a four-year deal using Nene’s Non-Bird rights. The contract would’ve looked like this:

Unfortunately for Nene and the Rockets, the final year of this deal would have violated the Over-38 rule because the veteran center will turn 38 on September 13, 2020, prior to the start of the fourth season of his contract.

The start of a season is considered to be October 1 for Over-38 purposes, so if Nene’s birthday was on October 13 rather than September 13, he would have been okay. But because a four-year deal for him had to be considered an Over-38 contract, the fourth-year salary needed to be viewed as deferred compensation, which would be spread out in a prorated fashion over the first three years of the deal. It would have looked like this:

Due to the increased cap hits on the new-look deal, the contract would have violated the rules of the Non-Bird exception, which limited Nene’s first-year salary to 120% of his previous salary ($2,898,000). As such, the Rockets couldn’t complete the four-year contract using those Non-Bird rights.

It’s important to note that the Over-38 rule didn’t prevent the Rockets from signing Nene to a four-year, $15MM deal. If the team had wanted to use part of its mid-level exception, it could have given him that same contract the two sides originally negotiated. But Houston had earmarked its MLE for P.J. Tucker, leaving the Non-Bird exception as the team’s only viable means of bringing back Nene. So while Nene technically could have signed a contract that extended beyond his 38th birthday, the Over-38 rule significantly limited the Rockets’ ability to complete such a deal.

In Nene’s case, that fourth year was referred to as a “zero year,” reflecting the adjusted cap charge. Determining what seasons are considered “zero years” is tricky, since a variety of factors relating to the length of the contract, the player’s age, and the player’s Bird rights are taken into account. Here are some of those factors:

If the Over-38 rule doesn’t already sound complicated enough, there’s an additional aspect of the rule that affects what happens when a veteran on an Over-38 contract plays out most or all of his deal. In that scenario, his deferred compensation gradually stops being considered deferred, and his cap hits are adjusted accordingly over the course of his contract. You can check out Larry Coon’s CBA FAQ for more details on that component of the rule if you’re interested.

Finally, it’s worth noting that LeBron James and Chris Paul reportedly played major roles during the last CBA negotiations in having this rule changed from the Over-36 rule to the Over-38 rule. It’s probably no coincidence that both James and Paul head into the 2018 offseason at age 33 with the opportunity to sign five-year deals that would have been considered Over-36 contracts — the new Over-38 rule won’t interfere with those deals.