Star forward Kawhi Leonard wants the Spurs to trade him, league sources tell Jabari Young of The San Antonio Express-News. Multiple outlets have confirmed the news, with Shams Charania of Yahoo Sports writing that Leonard has “grown uncomfortable” in San Antonio and would like a change. 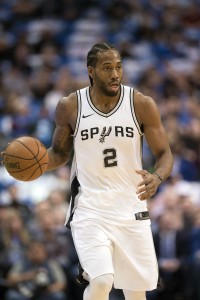 Sources tell ESPN’s Adrian Wojnarowski (Twitter link) that while it seems clear Leonard wants a change of scenery, he has yet to express anything directly to the Spurs about his future, and the team won’t rush the process.

According to Wojnarowski (via Twitter), Leonard – a Los Angeles native – has L.A. “at the center” of his preferred landing spots. While the Clippers could offer a compelling trade package and plan to pursue Leonard aggressively, per Marc Stein of The New York Times (Twitter link), the Lakers are atop his wish list, Wojnarowski adds.

Meanwhile, ESPN’s Ian Begley reports (via Twitter) that people close to Leonard have expressed a desire for the 26-year-old to play in New York, though the Knicks might have trouble putting together a viable trade package without including Kristaps Porzingis. Chris Mannix of Yahoo Sports adds the Kings to the list of teams who could kick the tires, tweeting that Sacramento has talked to teams about the No. 2 overall pick and “desperately” wants an established star.

The Sixers have also been cited as an asset-rich team with interest in acquiring Leonard, and the Celtics would fit that bill too. Boston reportedly made an offer for Leonard at the 2018 trade deadline, and Wojnarowski reports (via Twitter) that the C’s still have interest.

Leonard is just a year away from being able to reach unrestricted free agency, so he should be able to assert some leverage in the process depending on how willing – or unwilling – he is to commit long-term to certain teams. However, as we saw last summer with Paul George, who also wanted to join the Lakers, there will likely be clubs willing to roll the dice on a player of Leonard’s caliber without any assurances that he’ll stick around for longer than one year.

Of course, in George’s case, he was coming off a healthy, productive season, which can’t be said for Leonard. As we’ve written throughout the 2017/18 league year, Leonard and the Spurs were at odds this season over the diagnosis and treatment of a troublesome quad issue, with Leonard’s own doctors disagreeing with team doctors about the nature of the injury. That disagreement has been a source of tension between the Spurs and Leonard’s camp. The veteran was also reportedly put off by having his status questioned during a players-only meeting.

There was a belief that the Spurs and Leonard would look to mend fences this offseason, especially since the former first-round pick is eligible for a “super-max” extension that would start at 35% of the cap and would pay him well over $200MM for five seasons. San Antonio is the only team eligible to sign Leonard to such a deal, though there was no guarantee that the club would put that offer on the table. If Leonard is traded, he’d be eligible next summer to sign a five-year contract worth up to 30% – rather than 35% – of the cap.

According to Chris Haynes of ESPN.com (Twitter link), Leonard isn’t worried about the possibility of missing out on the super-max. Haynes adds that there’s a “feeling of betrayal” on Leonard’s side that at this point appears irreparable, as the two-time Defensive Player of the Year feels like the franchise turned on him after he sought a second opinion on his quad.

Per Haynes, Leonard and Spurs head coach Gregg Popovich have been in touch in recent days, but have yet to speak in person.

Although a number of teams figure to be in the mix for the former NBA Finals MVP if and when San Antonio begins taking calls, it’s hard not to see the Lakers as an ideal fit, assuming the Spurs aren’t committed to sending him to the Eastern Conference.

Besides being Leonard’s preferred destination, L.A. also has several young players that could intrigue the Spurs in a trade, and has indicated that none are untouchable. The Lakers would still have more than enough cap room to add another star in free agency after taking on Leonard’s $20MM salary for 2018/19. They’re also projected to be so far below the cap that they wouldn’t necessarily need to match salaries in a deal after July 1.

When the Lakers weighed a George trade a year ago, one key question they had to answer was how much they were willing to surrender for a player who might simply head to L.A. as a free agent 12 months later. The franchise figures to face a similar dilemma this offseason as it considers trading for Leonard. If the Lakers are confident they can land another star or two, it may make more sense to go all-in for Leonard than it did with George in 2017.

114 thoughts on “Kawhi Leonard Wants Out Of San Antonio”