While the NBA’s Collective Bargaining Agreement limits the flexibility teams have to sweeten their offers to free agents, one tool clubs have at their disposal is a trade kicker. Also known as trade bonuses, trade kickers represent extra cash a player can receive if his team trades him, and are often written into contracts for major free agent signings or extensions. 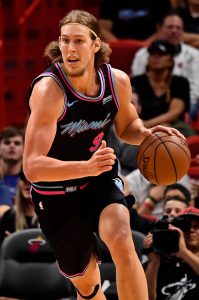 Trade kickers can be represented in a fixed dollar amount or a percentage, or a combination of the two. For example, Kelly Olynyk‘s current contract with the Heat calls for a trade kicker worth the lesser amount of $2MM or 5% of his remaining salary.

Trade bonuses can’t exceed 15% of the player’s remaining salary. However, many of them are worth that maximum allowable amount. Currently, 18 of the 23 players with trade kickers have ones worth 15%.

If a player with a 15% trade kicker has $10MM left on his contract and is traded, his bonus would be worth $1.5MM — 15% of $10MM. But the value of a trade kicker declines each passing day during the regular season, since the amount the player receives for the current year of his deal is prorated.

A trade kicker is paid by the team trading the player, and can only be paid out once during the player’s contract. For instance, Jeremy Lin had a trade bonus worth 10%, which he received when the Nets sent him to Atlanta during the 2018 offseason. If Lin is traded again by the Hawks, he wouldn’t get another trade bonus.

A pair of rules related to trade kickers have created some confusion about how the NBA would handle John Wall‘s 15% trade kicker if he’s traded this season. Those two rules are as follows:

In Wall’s case, because he signed a super-max extension that goes into effect in 2019/20, he still has more than $180MM left on his contract, meaning a 15% trade bonus would be worth nearly $30MM. His salary for the 2018/19 season ($19,169,800) is well below his allowable maximum, so he should be eligible to receive that bonus. However, spreading the cap hits across five seasons would push his future salaries well above the max for those seasons, which isn’t allowed. It’s not clear how the NBA would handle that bonus if Wall is traded this season, since that specific situation has never arisen before.

For example, let’s say a player with three years and $30MM left on his contract ($10MM annual cap hits) has a 15% trade kicker. His bonus would work out to $4.5MM, which would be spread out across three seasons, adding $1.5MM to his current-year cap hit. The team acquiring him would view him as an $11.5MM player, while the team trading him would consider him a $10MM player. In some cases, that discrepancy can prevent a deal from working for one side from a salary-matching perspective.

Here are several other rules related to trade kickers:

An earlier versions of this post was published in 2013 by Chuck Myron.