As we’ve noted a few times leading up to this Sunday’s deadline, March 1 is the final day in an NBA season that a player can be waived and retain his playoff eligibility for a new club. Any player released after March 1 can still sign with another NBA team once he clears waivers, but he wouldn’t be able to participate in the postseason with his new team.

The playoff-eligibility rules are fairly clear for players on standard NBA contracts, but how exactly do they work for players on two-way contracts? Let’s take a closer look…

1. Players on two-way contracts aren’t eligible for the postseason.

We’ll start with the simplest rule — a player on a two-way contract can’t play for his team in the postseason, even if he hasn’t used up his full allotment of 45 NBA days. A two-way player can travel and practice with the team during the playoffs, but has to remain on the inactive list during games.

2. Two-way players waived after March 1 aren’t eligible to play in the postseason for a new team.

The same waiver rules that apply to players on standard NBA contracts apply to players on two-way deals when it comes to playoff eligibility. If a player on a two-way contract is waived after this Sunday, but before the end of the regular season, he won’t be eligible to join another team for the postseason.

Although these first two rules significantly restrict the ability of two-way players to participate in the playoffs, it’s still possible for a player who is on a two-way contract next week to play in the postseason.

3. A player on a two-way contract who has his contract turned into a standard NBA deal by his current team any time up until the last day of the regular season can play in the postseason for that team. 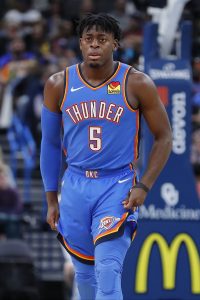 Rookie wing Luguentz Dort, who has started the last 15 games for the Thunder, is the most obvious example this season of a two-way player who has contributed to his team’s success and could have a role in the playoffs.

If the Thunder want to ensure they’ll have Dort available for the postseason, they could unilaterally convert his two-way deal into a standard, one-year NBA contract or negotiate a standard, multiyear pact anytime between now and the end of the regular season. As long as a two-way player gets moved to the 15-man roster on or before the last day of the regular season, he’s eligible to participate in the playoffs.

Oklahoma City is in a pretty good position to make this move with Dort. The team has an open spot on its 15-man roster, so no one would have to be released to make room. The Thunder also have a portion of their mid-level exception available, so they could potentially negotiate a contract of up to three years with the first-year swingman if he’s open to it.

Moving Dort to the 15-man roster would increase the Thunder’s projected tax bill, which may dissuade them from promoting him sooner rather than later. But if OKC were to make a move near the very end of the season, the effect on the club’s cap and tax bill would be minimal. If the Thunder want Dort available in the postseason, they have a clear path to making it happen.

Although these eligibility rules for two-way players shouldn’t create any problems for most of the league’s 30 teams, the Thunder represent at least one team that has a decision to make before season’s end. In order to make a player on a two-way contract available for the postseason, a club will have to convert that player to a standard NBA deal by April 15.

For more information on how two-way contracts work, be sure to check out our full glossary entry.