The most common tool over-the-cap teams use to sign free agents from other teams is the mid-level exception, but that’s not the only exception those clubs have to squeeze an extra player onto the payroll. The bi-annual exception is a way for a team to sign a player who may command more than the minimum salary, but less than the mid-level. 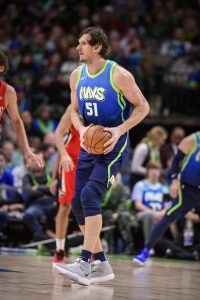 During the 2019/20 league year, four teams – the Bucks, Pelicans, Knicks, and Spurs – were ineligible to use the bi-annual exception at all, since they used it in 2018/19. Four teams have used the BAE this season, with the Mavericks signing Boban Marjanovic, the Pistons signing Markieff Morris, the Grizzlies signing Marko Guduric, and the Raptors signing Stanley Johnson. Those four clubs won’t have the exception at their disposal during the 2020/21 league year.

If a team uses all or part of the bi-annual exception, the tax apron becomes the club’s hard cap for that season. Teams that sign a player using the BAE can later go under the cap, but can’t go over the tax apron at any time during the season once the contract is signed.

A player who signs a contract using the bi-annual exception is eligible for a one- or two-year deal, with a raise of 5% for the second season. For players who signed using the BAE in 2019/20, the maximum value of a two-year contract was $7,427,150. Teams also have the option of splitting the bi-annual exception among multiple players, though that happens much less frequently than it does with the mid-level exception, since a split bi-annual deal may not even be worth more than a veteran’s minimum salary.

The bi-annual exception starts to prorate on January 10, decreasing in value by 1/177th each day until the end of the regular season.

When the NBA went on hiatus last month, several teams remained eligible to use the bi-annual exception in 2019/20. However, it seems extremely unlikely that any will actually do so, even if the league is able to resume its season later in the spring. Assuming those BAEs go unused, they’ll be available to those teams in 2020/21.