Celtics head coach Brad Stevens, currently in the midst of his seventh season with the club, isn’t going anywhere any time soon. The team has announced today that it has extended Stevens’s contract. The specifics of the new deal have not been divulged. 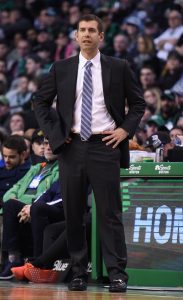 After leading Butler to two NCAA Finals games, Stevens was brought on board by Celtics president Danny Ainge to replace Doc Rivers in 2013, initially signing a six-year, $22MM deal. The team extended its head coach’s initial contract in 2016.

Stevens sports a 318-245 (.565) regular season record for Boston. He has led the club to six playoff appearances during his seven seasons, including two runs to the Eastern Conference Finals. This season’s team is locked into the third seed in the East with a 48-23 record. The club has one Orlando seeding game left ahead of the 2019/20 playoffs.

“Brad is one of the most intelligent and hard-working coaches in the game today,” Ainge raved. “We are honored to have him with us as we continue to pursue our next championship.”

Stevens is the second Eastern Conference head coach to receive a contract extension today, as the Pacers also reached a new deal with Nate McMillan.