With the NBA moving forward on its plan to play the G League season at a single “bubble” site in Florida, several players are hoping to find opportunity in unconventional circumstances in the midst of a pandemic. But one player who intends to participate is no stranger to said unconventional opportunities. 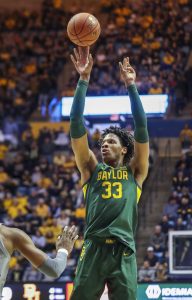 Freddie Gillespie grew up in Woodbury, Minnesota, residing less than 30 minutes away from the Timberwolves’ arena, Target Center. While many kids dream of making the NBA, the vast majority see their hopes fade over time. But that wasn’t the case for Gillespie, a 23-year-old who carries one of the most unique stories in basketball.

The story goes like this: Gillespie, now 6’9″, entered high school at 5’11”. During his growth spurt, he decided to play basketball in his sophomore year. He rapidly improved in his first few seasons, making progress at both ends of the court, but suffered a torn ACL late in his junior year.

He returned the following season, but had lost some of his athleticism and didn’t receive a single Division I or Division II offer. Due to starting basketball late – and in conjunction with his injury – Gillespie decided to focus on academics, something his parents had emphasized throughout his childhood.

Gillespie, who still wanted to play basketball, chose to attend Division III Carleton College. It allowed him to pursue a prestigious degree, but also to play competitively, and his love of the game started to grow stronger.

“It was tough,” Gillespie told Hoops Rumors in a phone interview, explaining that he wasn’t deterred despite encountering a few naysayers. “It wasn’t motivating in terms of proving people wrong, it was more like, ‘Let’s just take a less conventional route then.’ I knew it would be tough, but I believe my relentless work ethic and mustard seed faith would open doors.”

Gillespie grew to 6’9″ with a 7’6″ wingspan during his freshman year in college, as he committed to growing his game in a way he never had before. It was clear that his athleticism had not only returned — it had strengthened. Along with it came an improved skill set, a higher basketball IQ, and an increased competitive drive.

“It was just hours and hours in the gym, watching film and being relentless with it,” Gillespie said. “Every day that I woke up, I dedicated most — if not all — of my day toward reaching these goals and becoming a better basketball player.”

Gillespie knew that in order to reach the NBA from a Division III program, he’d have to beat long odds. A handful of other pros have done it, including current Heat sharpshooter Duncan Robinson (Williams College). But Robinson eventually transferred to a Division I program. Gillespie realized what needed to happen after his sophomore season ended — his path was about to change again.

Al Nuness – a former collegiate player and close friend of Gillespie’s mother – managed to put Gillespie in touch with Baylor coach Scott Drew through his son, Jared Nuness, the team’s Director of Player Development. Gillespie then made the decision to attend Baylor as a walk-on and sit out the season due to NCAA rules for transfers. He cracked the team’s rotation during his junior season.

“You have a kid that had to overcome an injury, plus overcome not having the chance to really get a lot of minutes and play throughout his high school career,” Jared Nuness said. “He had to walk on and earn his way at Baylor. He lived and stayed in the gym every day, worked on his craft and things he needed to develop and improve on. So, as far as a player goes, he has an extremely high IQ and his work ethic is second to none.”

As a junior, Gillespie averaged just 5.3 points and 4.6 rebounds per game over the course of 26 contests, but he was determined to improve, motivated by his long journey to get there. Those around the program tell stories of him playing guards one-on-one before or after practice in order to improve his lateral quickness.

Simply put, Gillespie was determined to take his game to another level in preparation for his senior season.

Gillespie went on to become a force, using several hours of training and film-watching to establish himself as a full-time starter for his final season. He anchored the team’s defense, increasing his averages to 9.6 points, 9.0 rebounds and 2.2 blocks per game in the process.

“Baylor had a top-five defense in the nation and Freddie was the anchor,” Jared Nuness said. “He guarded 1-through-5, and at times, the opposing team’s best player. Not just the coaches, but the players looked for him to clean up any mistakes.”

Gillespie was named to the Big 12 All-Defensive Team and the All-Big 12 Second Team, helping the Bears finish 26-4 while delivering on the promise he made when he first arrived at Baylor. He was also the Big 12 Most Improved Player, as well as the Big 12 Conference Male Academic Athlete of the Year, showing his dedication both on and off the floor.

When the season ended, it was clear Gillespie would receive consideration from NBA teams, so he hired representation and began shifting his focus to draft preparation. He stayed ready by doing what he knows best: training vigorously. He participated in open runs when available, including some offseason games that circulated on social media featuring Bam Adebayo, John Wall, Michael Beasley, and others.

Gillespie, who took part in the NBA’s revamped combine, estimates that he interviewed with over two-thirds of the league’s 30 teams during the pre-draft process. While he generated a good deal of interest, his future remained unclear when the draft began on November 18.

Multiple teams considered drafting Gillespie in the second round, he said, some of which expressed interest in using him as a draft-and-stash player. This would’ve required him to start his career overseas.

“I told them I respect the opportunity, but I want to bet on myself in the NBA,” he said. “I think I’d rather take my chances as an undrafted free agent. I think I’m an NBA talent.”

After going undrafted, Gillespie considered multiple offers and ultimately signed an Exhibit 10 (training camp) deal with the Mavericks. Like most Exhibit 10 recipients – who often join their team’s G League affiliate after spending the preseason on the NBA roster – Gillespie was waived when the Mavs finalized their regular-season roster ahead of last month’s deadline. However, Dallas will bypass the NBAGL bubble, as Hoops Rumors first reported, leaving Gillespie without a job for the immediate future.

“I try to get something out of every place I go to,” Gillespie said. “I know I want to go a certain way, but I just try to maximize my environment, maximize my resources and get the most out of every situation, no matter where that is. My mentality when things don’t go my way or I didn’t get the results I want, I’m like, okay — I know I put my best effort forward and tried to get something out of it.”

Agent Jerry Dianis, whom Gillespie recently hired when he changed representation, is confident in his client’s future, regardless of the short-term uncertainty.

“Freddie rebounds and plays defense with the exuberance of a child opening gifts on Christmas Day,” Dianis said. “He combines Hall-of-Fame character with relentless rebounding, defensive versatility, (and) the ability to set solid screens and finish ambidextrously at the rim. Just a tough glue guy that knows his role.”

His offensive game remains a work in progress, but Gillespie’s height (6’11” in sneakers), wingspan (7’6″), and 36.5-inch vertical give him the size and length necessary to play and defend multiple positions. Being named to the Big 12 All-Defensive Team was no accident — Gillespie takes pride in his defense, studying the likes of Adebayo, Clint Capela and others.

“I remember when I was in high school, I would get upset when someone would even score on me at all,” he said, laughing. “My coach would always have to remind me that the game is literally designed for people to score. You just have to make them take tough shots. You can’t hold everybody to zero (points). But that was my mentality. At Baylor, my mindset was to be versatile on defense. So I was able to guard 1-through-5. Often times I was tasked with guarding the opposing team’s best frontcourt player, but being able to switch out onto all five positions is something that I focused on.

“This came by playing a lot of the guards one-on-one, working on my lateral quickness, my body, my base and my core to be able to guard the post. Working on reactivity so I can go block shots and play steals. All of the things like that. I knew I wanted to become a great defender. I wanted to be a guy that’s looked at as, ‘We could put him on the floor and he’s someone that could lock down the other team’s best player.’”

Despite his talent as a defender and rim protector, Gillespie understands he still has significant room to grow on both ends. Having graduated from college last year, he finds himself in a similar position to the one he faced on draft night: unsure of the journey that lies ahead.

The next step, he said, is working to earn a new opportunity that gets him closer to his goal of playing in the NBA. That may happen in the G League — he’s eligible to be selected in the NBAGL Draft on Monday, January 11.

“My focus is regrouping and going back out on the attack,” Gillespie said, explaining his mindset after being waived by Dallas. “As long as I’m still breathing, I think I got a chance at the NBA. Keep talking with my agent and develop a plan. Right now, the plan is to reach out to teams. I know they’re having a G League bubble. Right now, it’s train, train, train. Stay in shape. I’m ready for anything if the opportunity comes. I can say I’m in shape and I’ve been training. I can drop everything at the hat and be ready to play. So that’s one, always being ready.

“The second (focus) is strategizing, planning and seeing what happens in the G League bubble. I plan to participate in that and show teams I’m still the one to bet on. I think I’ve shown that at every place I’ve been at. I’m continuing to improve myself and get to a place where I can contribute to helping my team win.”