A trade kicker is a contractual clause that pays an NBA player a bonus when he’s traded. They’re one of the tools teams have at their disposal to differentiate their free agent offers from the ones put on the table by competing clubs.

Sometimes the kicker is worth a fixed amount, but usually it’s based on a percentage of the remaining value of the contract. So, a player who has a 10% trade kicker is eligible for a bonus worth 10% of the amount of money he has yet to collect on his deal.

Regardless of whether a trade kicker is set at a fixed amount or a percentage, the bonus can’t exceed 15% of the remaining value of the contract. Most trade kickers are worth 15%, the highest percentage allowed.

A trade bonus must be paid by the team that trades the player, rather than the team acquiring him. The current Collective Bargaining Agreement also allows a player to waive his trade kicker as part of a deal, if he so chooses.

If you want a more detailed explanation of how trade kickers work, check out the Hoops Rumors Glossary entry on the subject. 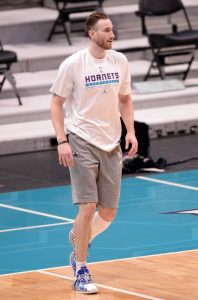 With the help of contract information from Basketball Insiders, here’s a list of the NBA players who have active trade kickers for 2020/21, listed alphabetically, along with the details of those trade bonuses:

The following players have trade bonuses on their contracts, but those bonuses would be voided if they were to be traded during the 2020/21 league year, since they’re already earning this season’s maximum salary:

The following players have signed contract extensions that will include trade kickers, but those extensions won’t go into effect until the 2021/22 season: