5:38: Embiid intends to return to action tonight, sources tell Chris Haynes of Yahoo Sports (Twitter link). Head coach Doc Rivers said Embiid might not play his normal amount of minutes due to conditioning, but he’ll be back for Game 3, ESPN’s Adrian Wojnarowski confirms (via Twitter). 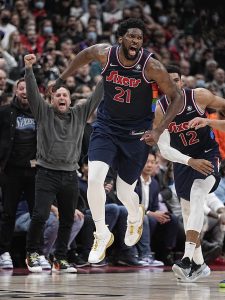 10:54am: Sixers center Joel Embiid has cleared the NBA’s concussion protocol and is hoping to play in tonight’s Game 3 against the Heat, tweets Tim Bontemps of ESPN. Embiid participated in today’s shootaround, and although he is officially listed as out, his status could change before game time.

The team is currently optimistic that Embiid will be able to play, according to Shams Charania of The Athletic (Twitter link).

Embiid is still dealing with a fractured orbital bone as well as a torn ligament in his right thumb. The team has prepared a mask that he will wear to protect his face if he’s able to resume playing.

Tonight’s game will tip off at 7:00 pm Eastern Time, so the Sixers have a few more hours to make a final determination on Embiid’s availability. If he’s not able to play, he’ll likely target a return in Game 4, which will take place Sunday night in Philadelphia.

After earning a spot as an MVP finalist during the regular season, Embiid continued to dominate in the first round against the Raptors, averaging 26.2 points and 11.3 rebounds per night in the six-game series. The Sixers will need him back on the court to overcome a 2-0 deficit against Miami.