The Timberwolves‘ disappointing season reached a new low Saturday night, and coach Chris Finch indicated some lineup changes may be coming in the new year, writes Chris Hine of The Star Tribune. Minnesota dropped its sixth straight game, letting a large lead slip away in the third quarter of a loss to the Pistons, who have the NBA’s worst record.

“Old demons,” Finch said in trying to explain the collapse. “Got outcompeted in the third. Just lifeless and not sure exactly where it comes from.”

Finch also cited a need for “people who want to go out there and try to rebound.” Detroit pounded the Wolves 52-37 on the boards and held a 9-0 lead in second-chance points. Finch also indicated that the team’s struggles may be mental as well as physical.

“Tonight was the first time I saw them frustrated with each other through a lot of different ins and outs of the lineup, tough losses on the road,” Finch said. “But tonight I think it manifested itself in a different way. A lot of frustration with guys not making the right and simple play.”

There’s more on the Wolves:

After a competitive playoff performance and a major offseason trade that brought in Rudy Gobert, the Timberwolves appear to be legitimate contenders in the Western Conference. Minnesota won 46 games and reached the postseason for the first time in four years, but coach Chris Finch plans to emphasize to his team that the next step won’t come easily, writes Jon Krawczynski of The Athletic.

Minnesota sent five players and a hefty package of draft assets to Utah to acquire Gobert, but the front office views him as a difference maker and doesn’t believe it overpaid, Krawczynski adds. Now it’s up to Finch and the rest of the coaching staff to figure out the best way to use Gobert alongside fellow big man Karl-Anthony Towns.

“I’m trying not to overthink that right now,” Finch said. “I don’t want to solve a problem before we have a problem. But we have to have some ideas ready to go.”

The Trail Blazers defeated the Knicks on Sunday to win the 2022 Las Vegas Summer League championship, winning the contest 85-77. Portland was led by Trendon Watford, who finished with 19 points and was named the championship game MVP.

In addition to his 19 points, Watford also recorded seven rebounds, two assists, three steals and a block, shooting 7-of-15 from the floor. The Blazers finished 4-1 during summer league play and also received a strong performance from two-way player Brandon Williams (22 points) in the final game.

There’s more from the Northwest Division this evening:

However, Connelly made it clear during his introductory press conference on Tuesday that he’s certainly not looking to clean house or make any major, immediate changes to the way the franchise is run, joking that his plan is to “get out of the way (and) hope I don’t mess it up too much,” according to Jon Krawczynski of The Athletic and Chris Hine of The Star Tribune.

“I’m not joining a team that’s broken,” Connelly said. “This is a team that’s trending in the right direction. It’s made a ton of really, really smart decisions, most recently extending (head coach) Chris (Finch) and getting Pat Beverley on the additional one-year (contract). So I’m not here to impede progress, I’m here to promote it, and I’m hopeful that I can learn a ton from the people in the building, and hopefully I can add a little bit of my knowledge to what’s already a very strong core of people.”

Connelly acknowledged that it was a difficult decision to leave Denver for Minnesota, suggesting there were “a lot of sleepless nights” as he weighed the decision. But he believes the Timberwolves have a have a chance to “do something special,” which helped sell him on the move.

Of course, the financial aspect of the Wolves’ offer was also a major selling point, though sources confirmed to The Athletic that Connelly doesn’t technically have a stake in the team’s ownership. His deal calls for him to “benefit financially” if the value of the franchise increases over the life of his contract, per Krawczynski.

“Basically he’s on a bonus program, just like a lot of people are,” majority owner Glen Taylor said when asked about the equity aspect of Connelly’s contract. “If the team does well, he does better.”

Anfernee Simons says he’s “pretty sure” he’ll be back with the Trail Blazers next season, Sean Highkin of Bleacher Report tweets. “We both have a mutual interest in coming back,” Simons said of being a restricted free agent this summer. “I’m pretty sure it will get done.” Simons expressed back in February he “100 percent” wanted to re-sign with Portland — it seems nothing has changed since then.

The Timberwolves have signed head coach Chris Finch to a multiyear contract extension, the team announced today in a press release. The assistants on Finch’s staff have also been extended. 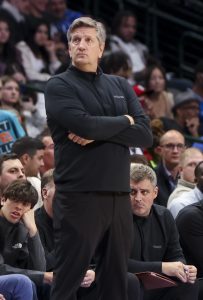 Shams Charania and Jon Krawczynski of The Athletic (Twitter link) first reported that Finch and his coaching staff were receiving multiyear extensions. According to Darren Wolfson of 5 Eyewitness News (Twitter link), Finch signed a three-year deal with a fourth-year option.

A former assistant coach in Houston, Denver, New Orleans, and Toronto, Finch took the reins in Minnesota midway through the 2020/21 following Ryan Saunders‘ dismissal. He guided the Timberwolves – who got off to a 7-24 start – to a 16-25 finish last season, then helped take the club to another level in ’21/22.

Minnesota finished this season with a 46-36 record, good for seventh in the Western Conference. It’s the Wolves’ second-best record since 2004 and puts them in position to earn just their second playoff berth since then, assuming they can win a play-in game this week.

“Chris has done a tremendous job creating stability and consistency for this franchise and building a winning mentality,” the Timberwolves said in a statement attributed to their ownership group. “We look forward to supporting him throughout the years while he continues achieving the goals he and his staff have set out for the team.”

The Wolves are in the midst of an ownership transition, with Glen Taylor planning to hand majority control over to Alex Rodriguez and Marc Lore in 2023. Finch’s extension – and the statement from team ownership – is a strong signal that he has the full support of Rodriguez and Lore in addition to Taylor.

On the one-year anniversary of his tenure with the franchise, Timberwolves head coach Chris Finch sat down for a wide-ranging conversation with Chris Hine of The Star Tribune to discuss his approach to the team.

Finch, 52, has guided Minnesota to a 32-28 record this season thus far, good for the No. 7 seed in the Western Conference. Center Karl-Anthony Towns made his first All-Star team since 2019, and second-year shooting guard Anthony Edwards has continued his trajectory toward becoming an All-Star talent in his own right.

Finch was an assistant coach under Nick Nurse for the Raptors during the first half of the 2020/21 season before accepting the gig as the head man in Minnesota on February 22, 2021.

Finch discussed his expectations for the club’s roster upon arriving as head coach late into the 2020/21 NBA season. Under Finch’s abbreviated stewardship as a midseason replacement for Ryan Saunders last year, the Timberwolves ultimately finished 16-25.

“I thought there was a lot of talent, particularly in [Towns] and [point guard D’Angelo Russell],” Finch said of his initial impressions of Minnesota’s roster. “Not just talent but skill. You can have talent, but skill is another thing altogether too.”

This season, the Timberwolves have been striving to strike a balance defensively between a proactive and reactive approach towards opposing offenses. Finch considers this tactic a good dress rehearsal for adjusting to playoff matchups.

“Now that you played teams multiple times, they have a good feel for who you are and what you’re trying to do,” Finch noted. “Our defense is pretty aggressive and aggressive defenses can be baited into a lot of things. Tempering some of that or using that at the right time is key. Two, as we whittle everything down towards what we hope is a playoff presence, it’s all about being able to adjust and execute different schemes in a playoff.”

“He is definitely a smart and quick learner,” Finch said. “Obviously we’re walking him through it on video, pointing it out when we see it in a game as soon as it happens and communicating so he can start making some adjustments. … It’s not on autopilot for him to switch gears right away and do something different. Every night it might be different so he’s still in that phase where he’s struggling to get an offensive rhythm at times because of this.”

Timberwolves head coach Chris Finch believes the team’s depth is “showing itself” over the course of the season, according to Chris Hine of The Star Tribune (via Twitter).

“We thought we had good depth the beginning of the season. At times we were inconsistent with that,” Finch said.

Discussing the team’s roster ahead of the trade deadline, Finch said the Wolves don’t feel the need to make moves, suggesting that the biggest improvement they can make will come from internal growth.

“Mainly we don’t feel any great pressure to do anything with this roster at this point in time. We’re pretty happy with where we are and guys are playing well and being the best versions of themselves we thought they could be.

“I don’t think anyone thinks we’re by any means a finished product. All rosters change from season to season. We don’t feel any great pressure to have to do something right now. Internal growth is always going to be the best accelerant for teams to take the next step,” Finch said, per Hine.

The Nuggets‘ first attempt to trade Bol Bol didn’t work out, but they’re happy with the return they got on the second try, writes Mike Singer of The Denver Post. Denver officially completed a three-team deal today that sends out Bol and PJ Dozier in exchange for Bryn Forbes, a dangerous outside shooter who will have a clearly defined role on the team.

“Really for me, it comes down to Bryn Forbes is a career 42% three-point shooter,” coach Michael Malone said. “You go back to last year in their run in winning a world championship in Milwaukee, that first-round series they swept Miami, and Bryn Forbes averaged 15 points a game.”

Currently ranked 18th in three-point shooting percentage, the Nuggets have a need for Forbes, who is expected to make his debut either Friday or Sunday. Malone was disappointed to part with Dozier, who will miss the rest of the season with a torn ACL. Malone offered to give Dozier a role on his staff if he ever goes into coaching.