Toronto has waived the three other contenders for the last spot on the 15-man roster, tweets Josh Lewenberg of TSN.ca. Those players are Josh Jackson, D.J. Wilson and Gabe Brown, and they’ll clear waivers on Monday, assuming they go unclaimed.

Champagnie, 21, went undrafted last year after starring in two college seasons at Pitt. He signed a two-way deal with the Raptors as a rookie, averaging 2.3 points and 2.0 rebounds in 7.8 minutes per night in 36 games last season.

Wilson had a $250K partial guarantee on his deal, and the Raptors will be on the hook for that amount. Jackson’s deal was non-guaranteed, as was Brown’s, but unlike Jackson, Brown signed an Exhibit 10 contract, so he will earn a $50K bonus if he spends at least 60 days with the Raptors 905.

With Dalano Banton likely to make the team after a strong preseason, the Raptors appear to have a three-man battle for their final roster spot, writes Lori Ewing of The Toronto Star. Justin Champagnie, Josh Jackson and D.J. Wilson are all in the running and Friday’s preseason finale is their last chance to make an impression.

The competition is particularly stressful for Champagnie, who missed the first three preseason games with pain in his hip, Ewing notes. He played only eight minutes Sunday, recording one point and one rebound. Champagnie, who appeared in 36 games for Toronto as a rookie last season, estimates that he is 90 to 95 percent recovered from the hip issue.

“I sensed some urgency from Justin,” coach Nick Nurse said. “I think some other guys just kind of let their game each day do what it does. It’s hard to get all excited one game and be not so excited the next because they play good and then not so good. Then they come back in practice and light it up again and get you thinking again. (Making cuts) is always a tricky thing. We’ll see how it all shakes out. I think there are still a lot of questions to be answered.”

When the Raptors face opponents with bigger frontcourts, they may switch up their lineup, Josh Lewenberg of TSN Sports tweets. Pascal Siakam, Scottie Barnes and OG Anunoby will start most nights but it “doesn’t mean you always have to start your five best,” according to head coach Nick Nurse said.

“Do we really want Scottie, Pascal or OG guarding a really good, big five to start the game?” Nurse said. “I don’t think we do, so we’re going to have to make some adjustments to that, or it’s just going to be three minutes and we’re sending in a guy.”

We have more on the Raptors:

Asked by Joe Vardon of The Athletic if he believes he’s gotten the proper credit for taking a pay cut this season in order to allow the Sixers to sign other players, including P.J. Tucker and Danuel House, James Harden shook his head.

“Nope, but guess what? I don’t care,” Harden said. “There’s like a stereotype (of Harden) where people always want to talk. People don’t really know me, so they feel like they can just say anything. One thing I won’t do is give them any attention. I won’t say anything, media-wise, publicly. I don’t care, because I’m comfortable and I’m confident in the things I do on and off the court.”

Harden turned down a player option worth more than $47MM and accepted a $33MM salary for 2022/23, with a player option worth $35.64MM for ’23/24. Having sacrificed some short-term money for the good of the team, the former MVP told Vardon he intends to take the same approach with his on-court statistics this season.

“At this point, (big) numbers are great, but whether I’m averaging 22 or 28 (points per game), I think it’s more that I’m making an impact on the game each and every night,” Harden said. “I don’t really think about numbers. I don’t think I’ve ever thought about numbers, honestly. … Ultimately, it’s winning a championship. The numbers don’t really mean anything, individually.”

From all appearances, Dalano Banton will have his contract guaranteed and a spot on the Raptors’ opening night roster, according to Doug Smith of the Toronto Star. That would leave forwards Justin Champagnie, D.J. Wilson and Josh Jackson fighting for one job during the preseason.

Coach Nick Nurse has spelled out the parameters of what he’s looking for at the end of his bench.

“Are they going to be able to understand what we’re doing, know what we’re doing, not make too many mistakes, be opportunity-type scorers?” he said. “Being on the same page out there, and being able to execute so that you’re fitting in, is always right at the top of the list. Competitive fire and drive, (playing) super hard is always 1, 1 and 1A. It’ll be interesting. It’s a battle, for sure.”

We have more on the Raptors:

The Raptors have signed free agent forward D.J. Wilson to a multiyear contract, the team announced today in a press release. According to Michael Scotto of HoopsHype (Twitter link), it’s a two-year, minimum-salary deal that includes a $250K partial guarantee.

It’s a reunion for the Raptors and Wilson, who signed three 10-day contracts and appeared in four games with Toronto in 2021/22. The former first-round pick out of Michigan played well in his limited run with the club, averaging 7.5 points, 4.0 rebounds, and 1.3 steals in 13.5 minutes per game while knocking down 11-of-15 shots (73.3%).

Wilson was released from his third and final 10-day contract with the Raptors in March after injuring his knee.

A year ago, the Raptors signed several free agents to multiyear deals with small partial guarantees in the first season and had them compete for spots on the 15-man regular season roster. It’s possible the team will take the same route this year.

Currently, Toronto has 12 players on fully guaranteed standard contracts, with Dalano Banton and Armoni Brooks on partially guaranteed deals. Second-rounder Christian Koloko is also likely in line for a spot on the 15-man regular season roster, which would leave just two openings available for Banton, Brooks, Wilson, and any other free agents the Raptors may sign before the season.

Of course, with the Raptors still being linked to the Kevin Durant sweepstakes, it’s possible the roster could undergo more significant changes by the fall.

After suffering a frustrating seven-game Western Conference Semifinals loss to the Mavericks, the Suns face some key rotation decisions during a 2022 offseason that arrived earlier than expected. One of those decisions involves Cameron Johnson, eligible for his rookie contract extension this summer. Duane Rankin of the Arizona Republic examines whether or not it would behoove Phoenix to extend Johnson this year, and whether he should be moved into the team’s starting rotation for the start of the 2022/23 season.

Johnson, the No. 11 pick out of North Carolina in 2020, proved to be a key contributor off the bench for the Suns during the team’s 64-18 season. He averaged a career-high 12.5 PPG on .460/.425/.860 shooting from the floor, while chipping in a career-best 4.1 RPG, 1.5 APG and 0.9 SPG. Johnson also was the first player promoted to a starting role when All-Star shooting guard Devin Booker missed three postseason games due to a hamstring injury.

Rankin predicts that Johnson could earn between $15-20MM annually on an extension, and points to the fact that the Suns reached rookie extension agreements with two of its three most important extension-eligible young players during the 2021 offseason. Jae Crowder started ahead of Johnson at power forward in his 80 games of regular season availability, but as he embarks on the last season of the three-year, $30MM contract he inked with the Suns in 2020, Rankin wonders if a Johnson extension would eventually necessitate the younger player’s move into the starting five over Crowder.

9:16am: Former Rockets guard Armoni Brooks will sign a 10-day deal with the Raptors, tweets Blake Murphy of Sports.net.ca.

Murphy adds that D.J. Wilson might be let go early from his 10-day contract to make room for Brooks. Wilson hurt his knee on Monday in the only game he played after signing his third 10-day agreement with Toronto. That deal is set to expire on Wednesday.

Brooks, 23, was waived by Houston last month to accommodate a three-for-one deal with the Celtics at the trade deadline. A long-distance shooting specialist, he averaged 6.2 points and 2.0 rebounds per game for the Rockets this season, but connected at just 30% from three-point range. He signed with Houston as a two-way player last year and was converted to a standard contract in October.

Brooks had been playing for the College Park Skyhawks in the G League, and there was a report last week that the Rockets had interest in bringing him back.

If Brooks signs before tonight’s contest at Cleveland, he will be eligible for five games during the 10-day deal. Toronto’s next game after that isn’t until Wednesday. 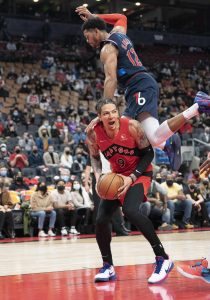 Veteran forward D.J. Wilson is back under contract with the Raptors, according to the team. Toronto stated in a press release that Wilson has signed a second 10-day deal using a hardship exception.

Wilson, who first signed with the Raptors on December 22, played well in two games with the club, averaging 12.0 PPG, 7.0 RPG, and 2.5 SPG in 23.5 minutes per contest and making 8-of-11 shots from the floor. However, he entered the health and safety protocols before his deal expired.

Having presumably been cleared in recent days, Wilson is back with the team as the apparent hardship replacement for Yuta Watanabe, who is the only Raptor currently in the health and safety protocols.

A former first-round pick, Wilson will earn $102,831 during his second 10-day stint with Toronto. That money won’t count toward team salary for cap or tax purposes, since it’s a hardship signing. His contract will run through January 16, covering the team’s next five games.

If the Raptors don’t have any players left in the protocols by the time Wilson’s current deal expires, they could still re-sign him, since they have an open spot on their 15-man roster. In that scenario though, his new salary would count toward the cap and tax.