The EuroLeague may be the next stop for Jabari Parker, according to a Eurohoops story. Parker spent eight years in the NBA, including 12 games with the Celtics last season, but he hasn’t played since being released last January.

“Jabari is looking for overseas opportunities now,” Parker’s agent, Nuno Pedroso, said in an interview with Mozzart Sport. “He was close to signing with two NBA teams, but it didn’t work out and now we (are) checking options overseas.”

Pedroso also denied a recent report linking Parker to Partizan Belgrade, saying, “Regarding Partizan, nothing is on the table or close to it. We just inform them that he’s available. News that there are advanced talks is not true.”

Parker, 27, was the second pick in the 2014 draft, but a pair of torn knee ligaments hampered his career. After spending his first four seasons with Milwaukee, he bounced around the league with short stays in Chicago, Washington, Atlanta, Sacramento and Boston. He averaged just 9.3 minutes per game with the Celtics in 2021/22 before being released in January in advance of his contract becoming guaranteed.

The Jazz hosted another free agent mini-camp this week, bringing in 20 players on Monday and Tuesday for a closer look, as our JD Shaw relays (Twitter links). While not all of the invitees have NBA experience, there are a handful of noteworthy names in the group, including former No. 2 overall pick Jabari Parker. Big man Reggie Perry, swingman Denzel Valentine, forward Bruno Caboclo, and guards Langston Galloway, Sindarius Thornwell, and Grant Riller were among the other players to audition for Utah.

3:35pm: The Celtics have officially waived Parker, the team announced (via Twitter). 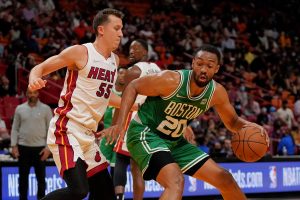 1:53pm: The Celtics won’t guarantee Jabari Parker‘s full salary for the 2021/22 season, according to Shams Charania of The Athletic, who reports (via Twitter) that Boston plans to waive the forward today.

Parker is the only player on the Celtics’ 15-man roster whose salary isn’t fully guaranteed for ’21/22. Releasing him will open up a roster spot, creating some added flexibility for the club with the trade deadline just over a month away.

The Celtics’ one-year deal with Parker would have paid him $2,239,544 for the full season. Instead, he’ll be owed $1,068,288, which is also the amount that will remain on Boston’s cap unless another team claims the forward off waivers.

Assuming Parker goes unclaimed, he’ll be free to sign with any NBA team. The Celtics, meanwhile, won’t be under any pressure to fill their newly-opened roster spot right away, since they’re still carrying 14 players on standard contracts.

Celtics reserve point guard Dennis Schröder has entered the NBA’s health and safety protocols and will not play in today’s Christmas game against the Bucks, the team has announced (Twitter link). He joins eight other Celtics in the protocols.

In a more positive twist, Juancho Hernangómez, Jabari Parker, and Brodric Thomas have exited the league’s COVID-19 protocols and are available for today’s game, per Jared Weiss of The Athletic (via Twitter). Guards Marcus Smart, who has been dealing with a hip injury, and Romeo Langford, who has missed time due to an Achilles injury, are also available. Boston center Al Horford is out of the league’s coronavirus protocols but is still working on his conditioning and has been ruled out for the contest.

Wesley Iwundu, who just signed a 10-day contract with the Hawks on Thursday, has entered the NBA’s health and safety protocols, per Adrian Wojnarowski of ESPN (Twitter link). Iwundu played 23 minutes in the Hawks’ 98-96 victory over the Sixers Thursday night, scoring two points and grabbing five rebounds. ESPN’s Bobby Marks tweets that the Hawks will need to sign another replacement player to replace Iwundu — himself a replacement player.

Hawks big man Onyeka Okongwu, who made his season debut last week, has entered the protocols as well, Sarah K. Spencer of the Atlanta Journal-Constitution tweets. In three games this season (22.3 MPG), Okongwu is averaging 10.3 PPG, 5.7 RPG, and 2.0 BPG. The Hawks now have nine players in the protocols.

Forward Bobby Portis is the latest Bucks player to be placed under the league’s health and safety protocols, Shams Charania of The Athletic tweets.

Giannis Antetokounmpo, Donte DiVincenzo and Wesley Matthews are already listed out for Friday’s game against the Pelicans for the same reason. Brook Lopez and Semi Ojeleye are injured and Thanasis Antetokounmpo is listed as doubtful due to a right soleus strain. That will leave the Bucks with 10 players if there are no more developments.

We have more Eastern Conference news:

Jabari Parker didn’t really explore other options after the Celtics waived him last week, writes Brian Robb of MassLive. Parker was cut loose so the team could avoid paying a $100K guarantee that would have taken effect with the season opener. He re-signed with Boston after clearing waivers and said it’s where he wants to play.

“I just knew (Boston) was the right place to be. I knew that,” Parker said. “This is a winning team and iron sharpens iron, so if anything, I’m going to get better here playing against the guys every day, being around true competitors, and obviously get a chance for me to learn. So this is just a great situation just because I’m just grateful for it and I’m counting my blessings.”

Parker didn’t play in the team’s first three games, but he got a chance Monday night with Al Horford sidelined by injury. He scored 13 points in 17 minutes and made a case for a larger role providing instant offense off the bench. No matter what happens, Parker is happy to get a second chance in Boston after three years of bouncing around the league.

“It’s the journey that I chose, so definitely appreciative of the Celtics organization, just my teammates always being supportive,” he said. “Regardless of anything, I’m around good people, I’m around a great team, and I’m just grateful for the moment.”

8:02pm: The Celtics confirmed the return of Parker in a press release.

6:05pm: After being cut by the Celtics earlier this week, backup power forward Jabari Parker has cleared waivers and will ink a new deal with Boston, per Shams Charania of The Athletic (Twitter link).

Parker had been signed to a multiyear agreement with the Celtics last year, but his 2021/22 season salary was only partially guaranteed for $100K. It had been scheduled to be fully guaranteed by the club’s first game of the season. Terms of Parker’s new deal have yet to be disclosed, but presumably it won’t become fully guaranteed until the leaguewide deadline in January.

Parker began the 2020/21 season as a little-used Kings reserve. Sacramento eventually waived him after the former 2014 No. 2 lottery pick failed to crack the club’s rotation. In three games with the Kings, Parker averaged 2.7 PPG and 2.0 RPG in 9.0 MPG.

He then signed with Boston ahead of the Celtics’ postseason push. The 6’8″ power forward appeared in 10 contests last year for Boston, averaging 6.4 PPG and 3.5 RPG in 13.8 MPG.

John Hollinger of The Athletic (Twitter link) notes that, in cutting Parker and adding him back, the Celtics will save significant cash toward his cap and tax impact, since the second year of his previous minimum-salary deal had a higher cap hit than his new one-year deal.

3:34pm: The Celtics have officially waived Parker, according to the team (Twitter link).

1:39pm: The Celtics are set to waive veteran forward Jabari Parker ahead of the 2021/22 regular NBA season, writes Adam Himmelsbach of the Boston Globe.

Parker signed a multiyear deal with Boston last season, but his salary for ’21/22 was only partially guaranteed for $100K. By moving on from Parker, the Celtics will open up a spot on their regular 15-man roster. The team also still has an open two-way contract slot.

Jared Weiss of The Athletic reports (Twitter link) that Boston, which projects to be a taxpayer this season, intends to keep its 15th roster spot open for the time being.

After being selected with the second draft pick out of Duke by the Bucks in 2014, Parker showed plenty of promise as a versatile scorer before being felled by two ACL tears, the first during his 2014/15 rookie season with Milwaukee and the second during the 2016/17 season.

Since being made a free agent by the Bucks in 2018, Parker has logged time with his hometown Bulls, then the Wizards, Hawks, and Kings before joining the Celtics during the spring of 2021. He appeared in just 10 games with the Celtics last year, averaging 6.4 PPG and 3.6 RPG across 13.8 MPG with Boston.

The 6’8″ power forward, 26, will hope to catch on with his seventh NBA club for an eighth NBA season.

Jabari Parker earned a $100K guarantee by staying on the Celtics‘ roster this week, but he will still have to win a job in training camp, writes Brian Robb of MassLive. Parker signed with Boston in April and averaged 6.4 points and 3.6 rebounds over the final 10 games of the season while playing 13.8 minutes per night . The remainder of his $2.283MM contract is non-guaranteed, but he will receive $1,141,517 if he’s still with the team on opening night.

Robb believes Parker has a decent shot at sticking with the Celtics, who don’t have another reliable scorer off the bench at power forward. However, sources tell Robb that Boston continues to explore roster additions, and finding another forward could affect Parker’s prospects. He adds that trading Carsen Edwards or Kris Dunn would be another option to trim the roster to 15 players.