LeBron James publicly spoke out this week against holding an All-Star Game this year. Several other stars have joined that chorus, according to Eric Woodyard of ESPN.

Giannis Antetokounmpo, James Harden and Kawhi Leonard also made their feelings public on Friday after the league and Players Association agreed to hold an All-Star Game in Atlanta on March 7.

“I’ve got zero energy, zero excitement,” Antetokounmpo said. “At the end of the day, if they tell us we’re going to show up, we’ve got to do our job. … Inside, deep down, I don’t want to do it. I want to get some break.”

USA Basketball has sent out approximately 60 invitations to players who have expressed interest in being part of the Olympic player pool, ESPN’s Adrian Wojnarowski tweets. Team USA could be without players advancing to the NBA Finals, based on the timing of July Olympics in Tokyo, Wojnarowski notes. Among the players invited are some of the league’s young stars, including Duncan Robinson, Zion Williamson, Trae Young and Ja Morant, Tim Reynolds of The Associated Press tweets.

As expected, veteran NBA forward Jonas Jerebko has officially signed with Russian team Khimki, the team announced in a press release. A report earlier this month indicated that Jerebko was close to a deal with the EuroLeague club. He has signed a two-year contract.

“I’m looking forward to playing in the top level in Europe after 10 years in the NBA,” Jerebko said in a statement. “Playing against the best teams in the EuroLeague was obviously on my bucket list. I’m super excited about the opportunity of joining my teammates.”

Despite those solid numbers, Jerebko didn’t see much time in the Warriors’ postseason rotation, logging just 26 total minutes in four Finals appearances. The Swedish forward apparently didn’t generate a ton of NBA interest on the open market this summer either, necessitating a move back overseas — he last played in Europe when he suited up for Italian club Angelico Biella from 2007-09.

Jerebko is the third player to sign with Khimki after being on an NBA roster for the 2018/19 season. Timofey Mozgov and Dairis Bertans also joined the Russian team.

Veteran NBA forward Jonas Jerebko appears likely to head overseas for the coming season, according to Lithuanian journalist Donatas Urbonas, who reports (via Twitter) that Jerebko is close to a deal with Russian club Khimki.

Despite those solid numbers, Jerebko didn’t see much time in the Warriors’ postseason rotation, logging just 26 total minutes in four Finals appearances. It seems as if his his NBA market hasn’t been particularly robust this offseason either, though he has yet to formally reach an agreement with Khimki, so it’s possible an NBA opportunity will surface at the 11th hour.

Assuming Jerebko does finalize a deal with Khimki, he’ll be the third player to join the team after playing in the NBA in 2018/19. Timofey Mozgov and Dairis Bertans have also signed with the EuroLeague club.

A blue curtain made sure the event was private, but behind that barrier Warriors center DeMarcus Cousins participated in a scrimmage this afternoon, the latest sign of progress toward his season debut, writes Monte Poole of NBC Sports Bay Area. Poole states that there probably won’t be much notice before Cousins is activated, but today’s scrimmage is another reason to hope it will happen soon. He notes that the team doesn’t normally use the curtain that divides its practice facility unless a rehabbing player is close to returning.

Searching for a solution at center, the Warriors will treat any progress from the former All-Star as welcome news. After rupturing his Achilles last season, Cousins joined the Warriors on a one-year deal with the understanding that he might not be able to play until January or February. Kevon Looney, Jordan Bell and Jonas Jerebko are holding down the position in the meantime, but the defending champs frequently find themselves at a size disadvantage.

“Loon is playing his tail off as an undersized center against bigs that are a couple inches taller than him and probably just as strong, or stronger,” Kevin Durant said. “He’s got his work cut out for him, as well as Draymond (Green). It’s on us to help out a little more on the rebounding, but teams are spreading us out with the 3-point line around just one big. So we’ve got to pick and choose our spots when we want to go in there and help in the paint and when we could contest 3s, because both of those things are beating us right now.”

Steve Kerr has been impressed with Jonas Jerebko since he watched Jerebko’s pre-draft workouts as the Suns’ GM back in 2009. When Jerebko became available last summer, Kerr knew the forward would fit in alongside Golden State’s core, as Mark Medina of the Bay Area News Group.

“[Kerr] told me, ‘We want to you come here. We need your abilities,’” Jerebko said of his summer conversation with Golden State’s coach. Kerr told him that he was a fan of the big man’s game and wanted him to come the Warriors.

After the conversation, Jerebko told his agent not to take calls from other teams and he ended up signing a one-year, $2.1MM deal with the two-time reigning champs.

Jonas Jerebko, Warriors, PF, 31 (Up) – Signed to a one-year, $2.18MM deal in 2018
Jerebko has bounced around the league the last few seasons but he always stays within his role and provides solid contributions wherever he lands. He’s averaging 7.2 PPG while shooting a career-high 48.9% from the field in 19.8 MPG. He’s also helped on the boards (5.5 RPG). An above-average 3-point shooter, Jerebko shouldn’t have too much trouble finding another contender to sign him as their backup stretch four next summer. It could be Golden State if he’s willing to settle for the veteran’s minimum again. 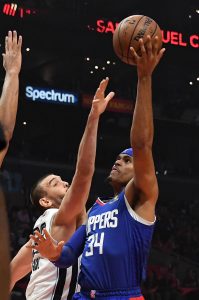 Tobias Harris, Clippers, 26, PF (Up) – Signed to a four-year, $64MM deal in 2015
When news leaked over the summer that Harris turned down an $80MM extension offer from the Clippers, many people wondered what Harris was thinking. He was willing to bet on himself that he could do even better as an unrestricted free agent and thus far, the odds have increased in his favor. Harris is posting career highs in several major categories, including scoring (21.0 PPG), shooting (50.8%) and rebounding (8.5 RPG) for one of the league’s surprise teams. When the superstars come off the board, Harris will be next in line for a big payday.

Kentavious Caldwell-Pope, Lakers, 25, SG (Down) – Signed to a one-year, $12MM deal in 2018
The previous Pistons regime declined to give Caldwell-Pope a multi-year extension. He wound up signing a pair of generous one-year contracts with the Lakers but he’s been reduced to backup duty. Most of the shots he’s taken have come from beyond the arc and he’s not particularly good at it (33% this season, 34.4% for his career). Caldwell-Pope doesn’t appear to have a future with the Lakers beyond this season and will have to take a pay cut to find work elsewhere.

Dragan Bender, Suns, 21, PF (Down) — Signed to a three-year, $13.4MM deal in 2016
When the Suns drafted Bender No. 4 overall in 2016, then traded with Sacramento for No. 8 selection Marquese Chriss, they seemingly resolved their power forward spot for years to come. Instead, they wound up with two of the biggest busts in that draft. Chriss was traded away to Houston during training camp while Bender is barely seeing the court in Phoenix. He’s appeared in eight games while averaging just 5.5 MPG. Bender needs a change of scenery but he’ll have to settle for a modest deal next year until he proves he’s a genuine NBA player.

Willie Cauley-Stein, Kings, 25, PF (Up)– Signed to a four-year, $15.35MM deal in 2015
The Kings have a lot of young bigs but Cauley-Stein has been a fixture in the lineup. He’s posting career highs at 14.3 PPG and 8.2 RPG while generally playing the same amount of minutes as last season. Cauley-Stein came into the league with a reputation of being a quality defender and he’s posted positive Defensive Box Plus/Minus ratings each season, according to Basketball-Reference. He’ll be a restricted free agent but might be one of the few who gets a substantial offer sheet, considering Sacramento will like choose to make Marvin Bagley III their main man in the middle.

The Warriors came into camp expecting to make Damian Jones their starting center on opening night, but they were happy he was able to earn the job with his preseason play, writes Anthony Slater of The Athletic. Jones was competing with Jordan Bell and Kevon Looney for the starting honor, but has separated himself from the pack.

“I think Damian has probably been one of the best stories in camp,” coach Steve Kerr said. “We were committed to giving him minutes, but we weren’t sure what we’d see.”

Jones’ performance may be enough to convince the team to pick up his $2.3MM option for next season. That decision is due by the end of October, and every dollar is important to the Warriors, who project to be well into the luxury tax again in 2019/20. DeMarcus Cousins is expected to take over as the starting center once he returns from an Achilles injury, but the chances are remote that he’ll return next year, so Golden State has to decide if Jones is the center of the future.

There’s more Warriors news to pass along, all courtesy of Slater:

Warriors owner Joe Lacob is preparing for a recruiting effort next summer to convince Kevin Durant to sign a multi-year contract with the team, he said in an appearance on The TK Show Podcast with Tim Kawakami. Durant will be a free agent once again after signing a one-year deal. Golden State will have Durant’s full Bird rights and will offer a five-year max contract to keep him in a Warriors uniform.

“He deserves to be able to go and be happy wherever he wants to be,” Lacob said. “I hope it’s here. And I hope he feels the same that way I do, and we do, about him when it comes time next summer. But you never can predict these things. We just will do our job and he’ll do his job, and we’ll see what happens next summer. And let the chips fall where they may.”

Durant’s preference for shorter, less expensive contracts has helped the Warriors in other ways, writes Drew Shiller of NBC Sports. Durant passed up a max deal in 2017 with a starting salary of $34.7MM. He signed for $25MM instead, which enabled the team to keep Andre Iguodala and Shaun Livingston. Lacob said a similar decision this summer made it easier for the Warriors to use their mid-level exception to add DeMarcus Cousins.

David West was a team leader and legitimate tough guy with well-rounded off-the-court interests, writes Candace Buckner of The Washington Post. The 38-year-old big man announced his retirement today after a 15-year NBA career that included the past two seasons with Golden State, where he won two titles.

In addition to his longevity, West will be remembered for a decision in made in 2015 to bypass an option year with the Pacers and sign with the Spurs in pursuit of a championship. The choice cost him about $10MM, but West felt it was worth it to pursue a ring. He joined the Warriors a year later and became the perfect veteran leader for a team coming off a disappointing finals loss.