The Jazz have signed general manager Justin Zanik to a multiyear contract extension, the team announced today in a press release.

Although Zanik was initially below president of basketball operations Dennis Lindsey in the Jazz’s front office hierarchy and is now technically working under CEO and top decision-maker Danny Ainge, he has essentially been running the front office’s day-to-day operations since his promotion to GM in 2019.

“Justin’s basketball acumen, ability to create meaningful relationships throughout the league, and management of our front office are invaluable assets,” Ainge said in a statement. “We’re thrilled that he’ll continue to lead the team.”

Zanik’s new deal is a signal that Jazz ownership is happy with the job that he and the front office did this summer reshaping the roster and building for the future.

Danny Ainge: Jazz Players “Really Didn’t Believe In Each Other”

The Jazz tore down their foundation by trading Rudy Gobert and Donovan Mitchell this summer, and CEO Danny Ainge and general manager Justin Zanik explained why during a press conference today, writes Andy Larsen of The Salt Lake Tribune.

Ainge, who was hired last December, said he was “curious and optimistic” when he joined the organization, but he was surprised by the atmosphere he encountered.

“What I saw during the season was a group of players that really didn’t believe in each other,” he said. “Like the whole group, I think they liked each other even more than what was reported. But I’m not sure there was a belief.”

He later explained, “I think individually they have resolve. I just don’t believe that collectively they did. So we saw a lot of players trying to do it on their own, as the belief in one another wasn’t as great as other teams I’ve been on and around.”

Ainge thought it might have been a result of a veteran team going through the motions of the regular season, so he waited for the playoffs to make any decisions. Once Utah got eliminated by Dallas in the first round, he decided to act.

“It was clear to me that the team did not perform well in the playoffs again,” Ainge said. “That was just me coming in from the outside, but that was a little bit of what the view was internally even before, you know, I made those assessments.”

Jazz owner Ryan Smith pitched Danny Ainge on the idea of taking on a role with the franchise during a recent trip to the Bahamas for Tiger Woods’ Hero World Challenge golf tournament, according to ESPN’s Adrian Wojnarowski and Tim MacMahon. The two men had discussions during the trip about the concept of Ainge coming aboard, then worked out a deal when they returned to Utah, resulting in the Jazz hiring Ainge as their CEO and alternate governor.

“I’ve never been ready to talk about this before, but Ryan and I had a chance to spend a lot of time together,” Ainge said, explaining that he took the last six months to spend time with family and decompress. “We hashed it out, and we were both excited about this opportunity. I think it was the timing more than anything.”

Ainge will oversee Utah’s basketball operations and will work closely with general manager Justin Zanik, who will continue to run the day-to-day operations. As Eric Walden and Andy Larsen of The Salt Lake Tribune write, the team is enthusiastic about the idea of a “collaborative” approach to the front office and isn’t all that interested in establishing a linear hierarchy in which one person ultimately makes all the decisions.

“If you’re in the league, everyone knows to call Justin right now. I think that’s pretty clear,” Smith said. “(But) I think when it comes to decision-making, we’re the kind of culture where it doesn’t really work that way. … When it comes to that, you want to be right a lot more than you’re wrong, because some decisions aren’t clear. Bringing Danny on board helps increase our chances of getting that right.”

Sources close to Ainge told Tony Jones and Jared Weiss of The Athletic that the veteran executive always wanted a Jerry West-type role that would give him the flexibility to play plenty of golf and spend time with his grandchildren. He’ll work with the Jazz every day, but won’t be putting in the 16- and 18-hour days that he became accustomed to in Boston.

1:29pm: The Jazz have officially announced Ainge’s hiring, issuing a press release to confirm the news. 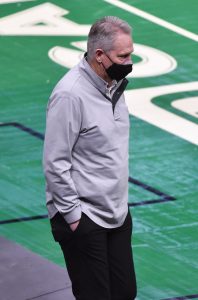 “Rarely do you get an opportunity to come into a franchise that is this close to being a special team,” Ainge told Tim MacMahon of ESPN (Twitter link). “It’s a very unique opportunity.”

12:48pm: The Jazz are hiring Danny Ainge to be the franchise’s alternate governor and CEO, sources tell Adrian Wojnarowski of ESPN (Twitter link). The former Celtics executive will oversee Utah’s basketball operations, with Justin Zanik remaining in the general manager role, per Wojnarowski.

Since Ainge stepped down from his position in Boston earlier this year, Utah has been repeatedly cited as a potential landing spot for him. Ainge played his college ball at BYU and is close with team owner and governor Ryan Smith. Additionally, the Jazz have undergone some front office changes in 2021, having reassigned executive VP of basketball operations Dennis Lindsey to an advisory role, which opened the door to bring in someone new like Ainge.

At the time of Lindsey’s demotion, reports indicated that Zanik had essentially been running the day-to-day operations of the front office since 2019. It seems likely he’ll continue to do so, since Ainge recently suggested he’d prefer to join a new team as a “helper,” rather than as someone who works “18-hour days.”

Ainge’s title indicates he’ll be above Zanik in the front office hierarchy, but Wojnarowski says (via Twitter) the two executives will “work closely.”

Ainge previously served as the president of basketball operations in Boston from 2003-21. The Celtics made the postseason in all but three of his 18 seasons running the front office, taking home a championship in 2008. Ainge’s trades for Kevin Garnett and Ray Allen helped lead the Celtics to that title.

The 2013 blockbuster deal that sent an aging Garnett and Paul Pierce to the Nets for a boatload of draft picks is considered one of the biggest NBA heists of the century, putting Boston in position to land Jayson Tatum and Jaylen Brown in subsequent drafts. However, while the C’s made three Eastern Finals appearances during Ainge’s last few years in Boston, that team could never quite get over the hump, with major additions like Gordon Hayward and Kyrie Irving not panning out as hoped.

In Utah, Ainge will inherit a roster that appears on the verge of title contention, with Donovan Mitchell, Rudy Gobert, Mike Conley, Bojan Bogdanovic, Jordan Clarkson, Royce O’Neale, and Rudy Gay all locked up for multiple seasons.

Trail Blazers forward Anfernee Simons has really started to blossom during his fourth year, writes Jason Quick of The Athletic.

A lot of Simons’ improvement appears to be a credit to his commitment to offseason workouts with longtime trainer Phil Beckner. One of Portland’s many undersized guards, Simons is averaging career highs of 12.6 PPG, 3.0 RPG, 2.4 APG and 22.8 MPG through his first five games during the 2021/22 season.

“Usually, he would train with me here and there,” Beckner said. “And at the start of the summer he wanted to know where I was going to be. I told him either Phoenix or Portland. So I asked him where he was going to be. His answer: ‘Wherever you are at.”’

Speaking to reporters at the team’s Media Day this week, forward Rudy Gay explained his interest in joining the Jazz this summer after spending four seasons as an effective tweener forward with the Spurs.

“I’ve played with [All-Star point guard Mike Conley] before, and it’s always good to know a guy on the team,” the 6’8″ Gay said of the decision, according to Eric Walden of the Salt Lake Tribune (via Twitter).

Although Lindsey has been the head of basketball operations in Utah in recent years, general manager Justin Zanik has run day-to-day operations in the front office since 2019 and he’ll continue to do so going forward, sources tell ESPN. Head coach Quin Snyder will also continue to have a “significant organizational voice,” says Wojnarowski (via Twitter).

New Jazz owner Ryan Smith is expected to take the opportunity to evaluate the basketball operations department to “see where it can be strengthened,” Woj adds (via Twitter). Tony Jones of The Athletic (all Twitter links) also suggests that more front office changes are on the way, with former Celtics president of basketball operations Danny Ainge among those who could be in the mix to join the Jazz. Ainge was linked to Utah immediately after word broke that he was stepping down from his job in Boston.

However, Wojnarowski stresses that Smith and Zanik have worked well together, and Jones says the plan is for Zanik to head up the basketball operations department going forward. If Ainge comes aboard, it won’t be to lead the front office, according to Jones. It’s unclear if Ainge would be interested in a role where he’s not making the final decisions.

Lindsey, confirming his move to an advisory position, shared a statement with Wojnarowski:

“In recent years, I have had conversations with the Miller family and then Ryan Smith when he came on board about moving into an advisory role. This is an appropriate time to make the transition with the organization on such solid footing. … I look forward to making contributions to the Jazz in a different way, while enjoying more time with my wife Becky and our four children.”

Trail Blazers small forward Carmelo Anthony is looking forward to a return to his original small forward position now that the team’s starting power forward Zach Collins has returned to health, per Casey Holdahl of Blazers.com.

“I’m actually very comfortable at that, I’ve been doing that my whole life,” Anthony said during a Zoom conversation yesterday. “Over the last couple years is where I started moving, transitioning toward playing the four more. You’ve got teams going small, so that was to my advantage as well.”

The Pistons will focus on external candidates in their search for a new general manager, according to James L. Edwards III of The Athletic. The new GM will work alongside senior advisor Ed Stefanski to chart a course for the future of the franchise, while Malik Rose and Pat Garrity will be retained as assistant GMs.