Trae Young‘s late-season struggles have put Alabama’s Collin Sexton and Kentucky’s Shai Gilgeous-Alexander on even terms with the much-hyped Oklahoma freshman for the status of top point guard in the draft. That’s one of the observations made by ESPN’s Mike Schmitz and Jonathan Givony in a look at first-round prospects whose teams were knocked out early in the NCAA tournament.

Missouri forward Michael Porter will have to show more than other players projected in the top half of the lottery during predraft workouts to solidify his status after a back injury sidelined him most of the season, according to Givony. Jaren Jackson Jr.‘s poor and abbreviated performance against Syracuse Sunday didn’t help the Michigan State freshman’s cause in comparisons to the draft’s other top big men, in Givony’s opinion.

At age 35, former Wizards draftee Kwame Brown hasn’t given up on his hope of a return to the NBA, relays Alex Kennedy of Hoops Hype. The first pick in the 2001 draft, Brown spent four seasons in Washington before embarking an a journeyman career that took him to the Lakers, Pistons, Bobcats, Warriors and Sixers. He hasn’t played pro basketball since the 2012/13 season, but will be part of the new BIG3 league, which he hopes leads to an NBA comeback. “I would definitely come in and do a workout for an NBA team so they can see I’m healthy,” Brown said. “That’s been the biggest thing for everybody: my health. I’ve had a couple of conversations with teams overseas, but everyone wants to see how I look in the BIG3 since I haven’t played in so long and they want to make sure I’m healthy.”

If you had Rashad McCants in your office BIG3 Draft Pool, today is your lucky day. The 32-year-old former Timberwolves guard was the first player drafted in the initial three-on-three league roster draft.

To Kenyon Martin‘s Trilogy the explosive shooting guard goes hoping to replicate the 2007/08 campaign that saw him average 14.9 points per game.

The second overall draft pick was Andre Owens, a now-36-year-old point guard whose NBA resume is limited to two partial seasons with the Jazz and Pacers.

Worth noting is that several marquee players said to have been available didn’t end up getting drafted, this includes Latrell Sprewell, Steve Francis and Isaiah Rider, among others.

For a complete list of of the draft results, check out the league’s official site.

For a continually updated list of the rosters – including a list of the players who were announced but did not get drafted – check out our own BIG3 player database.

Boston’s Al Horford could have been in the visiting locker room as the Eastern Conference semifinals get under way this afternoon, writes J. Michael of CSNMidAtlantic. Before signing a four-year, $113MM deal with the Celtics last summer, Horford narrowed his list to three finalists that also included the Wizards and Rockets. Wizards president Ernie Grunfeld and VP of basketball operations Tommy Sheppard flew to Atlanta to make a personalized pitch to Horford. Point guard John Wall also joined in the recruiting process.

“Me and him had a great conversation,” Wall recalled. “He told me it was down to [us], them and I think Houston. He made his final decision after that, you’ve got to move on. It would’ve been great to have him on our team, but he’s with the Celtics. They had a great season this year. He had a heck of a season and we’re competing against him now so all that texting, all we had is out the window.”

There’s more today out of Washington:

AUGUST 23, 2:25pm: Brown’s new representatives are shopping their client overseas, seeking a deal in the $300K range, according to international basketball journalist David Pick (Twitter link). Brown’s minimum NBA salary would be in the $1.55MM range, but as I noted below, Brown’s long layoff – combined with the fact that most teams already have 15 or more players – makes an NBA deal a long shot. 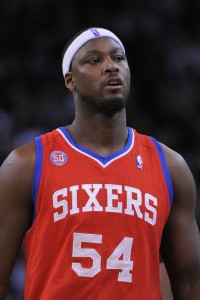 AUGUST 22, 12:35pm: Fifteen years after he was selected with the first overall pick in the 2001 NBA draft, and more than three years after he played his last game in the league, Kwame Brown is attempting to make a comeback. Interperformances announced today on its website that the agency now represents Brown, the former No. 1 pick.

“[Brown] is ready for a new life,” Interperformances wrote in a statement. “His comeback can be the road to glory for a team that believes in him. Kwame is back, physically healthy and ready to be the outstanding player he was on several NBA teams. … No longer the young man that entered the NBA, Kwame is now an experienced and mature player and man. And he’s back, for the love of the game.”

Brown, who is now 34 years old, last played for the Sixers during the 2012/13 season, and hasn’t played major minutes since he was a member of the Charlotte Bobcats in 2010/11. In 607 career NBA games, Brown averaged 6.6 PPG and 5.5 RPG, shooting 49.2% from the field. While he was a decent role player for a few seasons, he’s widely considered one of the biggest busts for a first overall pick in recent history.

It seems unlikely that many NBA teams would be eager to take a flier on Brown at this point, particularly since many clubs already have 14 or 15 players with guaranteed contracts and would prefer to use any remaining offseason roster spots on young players willing to join D-League affiliates. Still, if Brown is returning “for the love of the game” and can’t find an NBA home, perhaps he’ll seek a job with a team in Europe or Asia.

The Knicks officially introduced Jeff Hornacek as their new coach today, with team president Phil Jackson telling reporters that he found the demeanor and leadership qualities he was seeking in the former Suns coach, Brian Mahoney of The Associated Press relays. “That a comfort zone was possible, and I think the basketball knowledge that he has and the familiarity he has playing basketball are things that attracted us together,” Jackson said. “This is a coach who can teach and also has an idea of what kind of practice he wants to run and how he wants to do business.”

Hornacek acknowledged the team currently lacks the personnel required to sustain his up-tempo system, adding that he hopes his style of play will attract free agents to New York, Mahoney notes. “My hope is now that I’m here that we can get some of those players to come in here and if you want to win, what better place to win than New York,” Hornacek said. “So to me it’s a great opportunity and the excitement level, I know we can do great things.”

Here’s more out of the Big Apple:

Brown, 31, had been sidelined by a right hamstring injury and has yet to play this season. The big man was in a two-year, $6MM contract with the Sixers and has made approximately $64MM across his 13 NBA seasons, despite career averages of 6.6 points and 5.5 rebounds. Brown was taken first overall in the 2001 draft by Wizards president Michael Jordan, ahead of talents like Tyson Chandler, Pau Gasol, Joe Johnson, Zach Randolph and Tony Parker.

Morris, 22, has played in 79 games over the past three NBA seasons, averaging 4.1 PPG and 1.6 APG in 13.2 minutes per contest. Morris’ deal was only partially guaranteed, so he’ll receive $200K from the 76ers as he seeks out his next gig.

The Heat could again be the class of the NBA, while the Sixers have a strong shot at the league's worst record. Still, it appears they were competing over at least one player this offseason. Here's more on that and the rest of the day's news from the Eastern Conference.

END_OF_DOCUMENT_TOKEN_TO_BE_REPLACED

Yesterday, we rounded up the latest news on the 76ers' coaching search, which has lasted about three and a half months so far and still seems to be adding viable new candidates. Trail Blazers assistant David Vanterpool is the latest contender for the job, joining other frontrunners like Spurs assistant Brett Brown, Celtics assistant Jay Larranaga, and in-house candidate Michael Curry. As the Sixers' lengthy coaching search continues, let's check in on a few more notes out of Philadelphia….

Kwame Brown has exercised his $2.95MM player option to remain with the Sixers for next season, agent Mark Bartelstein tells Ken Berger of CBSSports.com (Twitter link). The move was a no-brainer for the former No. 1 overall pick who saw limited action over 22 games in 2012/13. His averages of 1.9 points, 3.4 rebounds and 12.2 minutes per contest were all career lows.

Philadelphia signed Brown to a two-year, $5.765MM contract last season, but he was unable to settle into the role of backup center as the team might have hoped. Half of his appearances were starts as the Sixers suffered from injuries to others on their front line, Andrew Bynum in particular.

The move cuts slightly into the cap room the team opened during last night's Jrue Holiday-for-Nerlens Noel trade. The Sixers don't figure to be a top destination for free agents this summer, with Holiday on his way out and Bynum not expected to return.