When word broke on Thursday that Thunder second-round pick Kevin Hervey would play in the G League this season, it ensured that we now know the 2018/19 plans for all 60 of this year’s NBA draft picks.

The majority of this year’s draftees signed NBA contracts and will be on rosters this season, but that’s not the case for all of them. And even among those that received NBA deals, there are plenty of differences in the terms of their contracts. 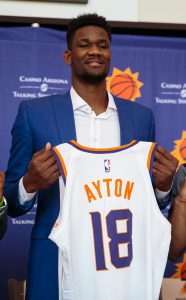 Generally, at least one or two first-round picks become draft-and-stash prospects, but that didn’t happen this year. All 30 first-rounders signed standard NBA contracts and immediately joined their teams’ respective rosters.

All 30 rookie contracts for this year’s first-rounders include the standard two guaranteed seasons, with team options for years three and four. Assuming he plays out his entire four-year contract, Suns center Deandre Ayton – the No. 1 overall pick – would earn a total of $40MM+. On the other end of the spectrum, No. 30 pick Omari Spellman will make just over $9MM in his first four seasons with the Hawks.

Our full breakdown of the salary details for this year’s first-rounders can be found right here.

As such, the contract details for second-rounders who signed NBA deals look pretty different from player to player. Here’s a quick look:

With 20 second-round picks signing standard NBA contracts ranging from one year to four years, that leaves 10 second-rounders who ended up taking a different path. These players won’t start the season on 15-man NBA rosters, but their teams still hold their NBA rights.

Here’s what those players are doing:

For the 10th time in 12 years, John Schuhmann of NBA.com got the opportunity to ask the NBA’s incoming crop of rookies a series of questions related to their fellow draftees.

Historically, the NBA rookies haven’t been particularly clairvoyant when it comes to their predictions — they haven’t accurately identified a Rookie of the Year winner since Kevin Durant in 2007/08. Still, it’s an interesting exercise, and one that occasionally results in a dead-on prediction, like when last year’s rookie class named Donovan Mitchell the steal of the 2017 draft.

Here are a few of the most interesting responses from this year’s rookies about the 2018/19 class:

JUNE 23, 8:55am: Rhode Island guard Jared Terrell has agreed to a two-way deal with the Timberwolves, the school’s men’s basketball team tweets.

Despite getting passed over on Thursday night, Terrell had attracted Minnesota’s attention during the pre-draft process. Terrell worked out twice for the club.

Terrell led Rhode Island to the NCAA Tournament, where it defeated Oklahoma and Trae Young in overtime during the first round of the Midwest Region before succumbing to Duke.

Free agent news has dominated NBA headlines over the last few days, but teams around the league are also taking care of the rookies they drafted last month, signing them to their first NBA contracts. Because cap holds for first-round picks count for 120% of the rookie scale instead of 100% in the current Collective Bargaining Agreement, there’s little incentive for teams to wait to lock up their first-rounders.

The value of those contracts depends on where a player was drafted. This year, No. 1 overall pick Deandre Ayton is in line for a four-year deal worth in excess of $40MM, which represents the maximum allowable 120% of his scale amount. No. 30 pick Omari Spellman, on the other hand, figures to get a four-year contract worth just over $9MM.

Second-round picks, meanwhile, aren’t assured of two guaranteed seasons, though some players will receive them. Teams can sign second-rounders to whatever amount they choose, using cap room or various exceptions. Those players who immediately join their NBA teams figure to get a minimum salary or something slightly above the minimum. We’ll make a note of contract details for second-rounders below, as they become available.

Finally, some second-rounders – and perhaps even some first-rounders – won’t sign in the NBA immediately. They may get two-way contracts, play in the G League, or head overseas to refine their games while their NBA teams retain their rights. We’ll make note of that below too, wherever it’s applicable.

Here’s a breakdown of 2018’s draft pick signings. This list will continue to be updated as more draftees sign their first NBA contracts:

When he was selected with the 45th overall pick in the draft on Thursday night, Hamidou Diallo technically became a member of the Nets. However, Brooklyn had already agreed to send that pick to the Hornets, who have subsequently agreed to flip it to the Thunder.

Neither of those trade can become official until after the July moratorium ends on July 6, but we now know what the Hornets will receive from the Thunder in exchange for Diallo. Rick Bonnell of The Charlotte Observer reports (via Twitter) that Oklahoma City will send its 2019 second-round pick and cash considerations to Charlotte as part of the swap.

Here are a few more leftovers from draft night, including more details on trades:

In a somewhat unusual development, not a single NBA veteran changed teams on Thursday night. While several trades were completed, all of those deals involved the rights to newly-drafted players, future draft picks, and/or cash.

Listed below are all the trades that were agreed upon at some point on Thursday. While most of these deals were made official during or after the draft, one won’t be finalized until June, which we noted below.

Note: Two other trades involving 2018 draft picks were agreed upon prior to draft day. We have separate stories on those Lakers/Sixers and Nets/Hornets swaps.

The 2018 NBA draft has come and gone, and we tracked all 60 picks in the space below.

From Deandre Ayton at No. 1 to Kostas Antetokounmpo at No. 60, here are 2018’s NBA draft results:

The Mavericks and Sixers are swapping late second-round selections, according to Shams Charania of Yahoo Sports, who reports (via Twitter) that Dallas is getting the 56th and 60th overall picks from Philadelphia in exchange for No. 54.

The 76ers initially owned six picks in the 2018 draft, but have been active on the trade market. The club sent the 38th overall pick to Detroit and the 39th overall pick to the Lakers, and will now complete a two-for-one deal with the Mavs.

With their newly-acquired 54th pick, the Sixers are drafting SMU guard Shake Milton, tweets Charania. Melton scored 18.0 points per game as a junior and shot 43% from 3-point range.

The Magic are sending the 41st overall pick in the draft to the Nuggets, who will use it to select Kentucky forward Jarred Vanderbilt, reports Jeremy Woo of SI.com (Twitter link). Orlando will move down two spots in the deal and use the No. 43 pick to draft Maryland forward Justin Jackson, Woo adds (via Twitter).

Heading to Orlando in the deal will be a future second-round pick, Josh Robbins of The Orlando Sentinel tweets. According to the Magic’s official announcement, it’s a 2019 second-rounder.

The Nuggets will add the intriguing Kentucky reserve to a draft haul that already includes Michael Porter Jr. In 14 games off the bench for the Wildcats, Vanderbilt averaged just 5.9 points per game but has upside as a gritty rebounder and defender.

Jackson had been regarded as a possible first-round pick last season but returned for his sophomore season at Maryland and ended up missing the second half of the season with a shoulder injury. He’ll join the Magic having averaged 10.3 points per game in 44 contests for the Terrapins.

9:57pm: With the conclusion of the first-round, we’ve wrapped up our live chat. Be sure to check out a transcript of the live chat for a nice five hours’ worth of casual reading.

5:45pm: It’s happening! This year in addition to our standard newsdesk coverage of the NBA Draft, we’ll be hosting a live chat for fans to discuss the big event.

Want to vent about your team’s most recent questionable decision but feel guilty constantly waking up your cat?

Maybe you just want to keep informed about what teams are doing but your husband or wife won’t stop hogging the remote.