Nuggets head coach Michael Malone and Sixers head coach Doc Rivers have been honored as the NBA’s coaches of the month for January in their respective conferences, the league announced today (Twitter link).

Malone, who will serve as the coach for Team LeBron at this year’s All-Star Game in Utah, coached Denver to a 12-4 record in January, improving the team’s overall mark to 35-16, good for the No. 1 seed in the West as of this writing.

Rivers led Philadelphia to an 11-3 run last month, which helped the Sixers reach the third seed in the East with a 33-17 record for the season to date. Rivers, the 2000 Coach of the Year, is in his third season with Philadelphia.

The NBA’s PR department tweets that the Thunder’s Mark Daigneault and the Timberwolves’ Chris Finch were the other two finalists for the award in the Western Conference, while Mike Budenholzer of the Bucks, Joe Mazzulla of the Celtics, and longtime Heat coach Erik Spoelstra were runners-up in the East.

The Timberwolves’ acquisition of Rudy Gobert could eventually go down as the most lopsided trade in NBA history with the Jazz as the beneficiary, Andy Larsen of Salt Lake Tribune opines.

Jazz rookie center Walker Kessler has played as well or better than Gobert has this season, in Larsen’s view. Utah also received Jarred Vanderbilt and Malik Beasley, who could potentially be flipped for first-round picks, plus the Timberwolves’ first-rounder this year as well as first-rounders in 2025, 2027 and 2029 and a pick swap in 2026.

Nuggets point guard Jamal Murray has been dealing with shooting issues, but is trying to find other ways to chip in, writes Mike Singer of The Denver Post. Singer notes that Murray’s left knee, which went under the knife in April 2021 after he tore his ACL, was sore during a 119-115 victory over the Hornets Sunday, but Murray did his best to play through the pain. He did not shoot well, but chipped in 11 dimes while only turning over the ball three times.

“I didn’t want to sit out,” Murray said. “I can not score and (still) have a decent game.”

As Singer observes, Murray made an impact through setting good screens, passing, being a threat from deep, and staying in touch with teammates on defense.

There’s more out of Denver:

Nuggets forward Jeff Green made a concerted push to convince longtime friend DeAndre Jordan to join him in Denver as a free agent this summer. Mike Singer of The Denver Post examines the frontcourt reserves’ friendship and breaks down Green’s pitch.

“I said, ‘Just come be with your bestie,’ and it worked,” Green told Singer, who writes that the conversation took place over a FaceTime chat. “At this point of our careers, it’s all about winning,” Green said.

The duo had previously linked up as members of the Clippers and Nets. Their families vacation together, per Singer.

“Two guys who really just enjoy life, that like to have a good time, we have a mutual respect for one another as far as the whole journey of what it takes to be an NBA player,” Green said. “He’s a gentle giant, very soft. Tries to have a hard exterior, but he’s very soft.”

There’s more out of Denver:

The Lakers are in danger of missing the play-in tournament and their stars may not return in time to save them, writes Broderick Turner of The Los Angeles Times. Tuesday’s loss at Dallas knocked L.A. into a 10th-place tie with San Antonio with seven games remaining, and the Spurs hold the tiebreaker because of a better conference record.

LeBron James missed the game against the Mavericks because of a sprained left ankle that he suffered Sunday. He has already been ruled out for Thursday’s contest at Utah and has been granted permission to return to Los Angeles for treatment and evaluation of the injury, Turner tweets.

Anthony Davis is listed as doubtful against the Jazz, but hopes to be ready for Friday’s game with the ninth-place Pelicans, sources told Turner. Davis, who hasn’t played since spraining his right foot and MCL on February 16, was “a little sore” after practicing Monday and the Lakers haven’t decided if it’s safe for him to play Friday.

2:45pm: The Nuggets have put out a press release officially confirming Malone’s extension. 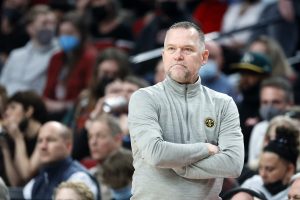 “This extension is well deserved for Coach Malone and one we are very excited to announce,” team owner Stan Kroenke said in a statement. “You can easily point to the on-court success that Michael has brought and the improvements the team has made each year under his watch, and you can also point to the selfless, hard-working culture that has developed and grown during his tenure. We look forward to Coach Malone continuing on the sidelines as we all work toward our goal of bringing an NBA Championship to the city of Denver.”

The exact terms of the extension aren’t known, but Wojnarowski classifies it as a multiyear agreement. Malone’s previous deal had been set to expire after the 2022/23 season, so it sounds like the team locked him up through at least 2025.

Malone, who coached the Kings before arriving in Denver, has been on the Nuggets’ bench since 2015, making him the NBA’s fifth longest-tenured head coach.

During that time, he has led the club to a 309-237 (.566) record and earned three playoff berths. Denver has won three postseason series under Malone, getting as far as the Western Conference Finals in 2020.

Despite missing Michael Porter Jr. and Jamal Murray – two of their three top scorers from last season – for much of 2021/22, the Nuggets are on pace to finish at least 10 games over .500 for the fifth consecutive season.

Malone’s 309 wins with the Nuggets places him third in team history, behind only Doug Moe (432) and George Karl (423), Wojnarowski notes.

Trail Blazers shooting guard CJ McCollum saw his first on-court action in over six weeks on Monday, writes Jason Quick of The Athletic. Having recovered from a collapsed lung suffered on December 4, McCollum chipped in 16 points during 28 minutes of action in his first game back with Portland, helping the team secure a 98-88 victory over the Magic.

“I think this is probably the most happy and at peace I’ve ever been in my life,” the 30-year-old McCollum said, noting that his outlook has shifted following the birth of his first child earlier this month. “I’ve always had a purpose before, but now I really, truly have a real purpose in my life, which is to be a good man and try to raise my son to the best of my abilities.”

In 25 games this season, McCollum is averaging 20.4 PPG, 4.4 APG and 4.0 RPG. His return to the court for the Trail Blazers arrives at a crucial time, as his backcourt mate Damian Lillard underwent surgery to address an abdominal strain last week and is scheduled to miss at least five or six weeks of action.

Two head coaches may clear health and safety protocols in time for their teams’ next games. Michael Malone traveled with the Nuggets to Oklahoma City and expects to be on the sidelines Sunday, tweets Mike Singer of The Denver Post. Malone missed four games while in the protocols, and acting coach Popeye Jones compiled a 2-2 record.

Darvin Ham, who is serving as acting head coach for the Bucks, is hoping Mike Budenholzer will be ready to return for Monday’s game at Charlotte, according to Eric Nehm of The Athletic (Twitter link). Nehm suggests that Budenholzer still needs to return multiple negative tests before being cleared.

Two more NBA head coaches have entered the health and safety protocols and won’t be on the sidelines for their respective teams in the short term.

Adrian Wojnarowski reports (via Twitter) that Sixers coach Doc Rivers has entered the protocols, while Mike Singer of The Denver Post (Twitter link) hears from a source that Nuggets coach Michael Malone has tested positive for COVID-19 and is now in the protocols.

In Philadelphia, assistant Dan Burke will take over for Rivers as the 76ers’ acting head coach, according to Wojnarowski. Malone will be replaced in Denver by assistant David Adelman for the time being, says Singer.

The list of head coaches in the protocols continues to grow — Frank Vogel, Billy Donovan, Monty Williams, Chauncey Billups, and Mark Daigneault are also currently affected. Rick Carlisle and Alvin Gentry were in the protocols earlier in the month but have since resumed coaching the Pacers and Kings, respectively.

In addition to placing Rivers in the health and safety protocols today, the Sixers also had two more players enter — Myles Powell and Tyler Johnson are now in the protocols and have been ruled out for Thursday’s game vs. Brooklyn, tweets Wojnarowski.

Clippers offseason acquisition Eric Bledsoe has heated up over the past three games, averaging 18.7 points and 5.0 assists on 52.4% shooting. The veteran point guard is feeling more at ease with his new teammates, Mirjam Swanson of the Orange County Register writes.

“They just told me to just play my game, go out there and play my game. Don’t worry about the mistakes, that comes with it,” he said. “They welcomed me with open arms and so it’s been pretty fun through the struggles, just got to keep it going.”

Bledsoe’s $19.375MM salary for next season is not guaranteed and it’s likely he’ll be a free agent.

We have more on the Western Conference: