8:43pm: The Knicks have officially signed Mykhailiuk, the team announced on social media. He received a one-year, minimum deal with only $50K guaranteed, Fred Katz of The Athletic tweets.

After being waived by the Raptors last month despite having a guaranteed salary for 2022/23, the Ukraine-born Mykhailiuk had indicated that he hoped to return to the NBA rather than pursuing a deal with a European club. That apparently included considering signing a G League contract if necessary.

The 25-year-old journeyman was first selected by the Lakers with the No. 47 pick after a four-year Kansas tenure in 2018. Prior to the Raptors last season, he has suited up for Los Angeles, the Pistons, and the Thunder.

Free agent wing Svi Mykhailiuk, whose guaranteed minimum-salary contract was waived by Toronto a couple of weeks ago, is prioritizing an NBA return over European opportunities, according to Christos Tsaltas of Greek outlet SDNA (translation via Google Translate).

The No. 47 overall pick of the 2018 draft, Mykhailiuk has bounced around a bit during his four-year NBA tenure, having played for the Lakers, Pistons, Thunder and Raptors. He had a down season in 2021/22 and didn’t receive much playing time for the Raptors, which is why they waived him, but he’s got good size at 6’7″ and 205 pounds, is only 25 years old, and is a career 35.3% three-point shooter — a decent mark.

Mykhailiuk just finished suiting up for Ukraine’s national team at EuroBasket, averaging 17.0 points, 5.0 rebounds, 2.8 assists and 2.2 steals on .400/.341/.842 shooting in six games (29.2 minutes). Ukraine was eliminated by Poland in the round of 16, with Mykhailiuk saying afterward that he hoped the team gave the war-torn nation a welcome distraction despite the loss.

According to Tsaltas, Mykhailiuk’s top priority as a free agent is finding another NBA team. Mykhailiuk has spent many years stateside, having played four years of college at Kansas prior to his NBA career. If he’s unable to find a roster spot, Mykhailiuk hasn’t ruled out a G League stint with the goal of returning to the NBA, Tsaltas writes. Mykhailiuk scored 40 points on .478/.438/1.000 shooting in his lone G League game last season with the Raptors 905.

Mykhailiuk is drawing interest from European clubs, but is focused on the NBA and isn’t expected to consider a return to Europe until he exhausts all NBA possibilities, Tsaltas adds. In 220 career games (40 starts, 17.0 minutes), Mykhailiuk holds averages of 6.6 points and 1.8 rebounds on .398/.353/.785 shooting.

Former NBA point guard Lorenzo Brown is part of a controversy at the EuroBasket tournament, according to Eurohoops. Brown scored 28 points and handed out eight assists Saturday, leading Spain to an overtime win over Lithuania in an elimination game. At the post-game press conference, Lithuania’s Mindaugas Kuzminskas suggested the outcome would have been different if not for Brown, who was born in the United States but recently became a Spanish citizen.

“I am not sure how this team would look without Lorenzo Brown because you signed him only this summer,” Kuzminskas said to a Spanish reporter. “But it is how it is.”

Brown, 32, was a second-round pick in the 2013 draft and played for four teams in a five-year NBA career that ended after the 2018/19 season. He has been with several overseas teams since then and recently signed with Maccabi Tel Aviv.

“Even if I haven’t been here long, I feel like these guys … they have known each other so long and they brought me in as one of them,” Brown said in response to Kuzminskas’ comments. “So it’s just an amazing feeling to have that brotherhood, “la familia” as they call it. It’s really a family. I am coming in here and I am a regular American guy and those guys are talking in Spanish. And I am learning every single day, so it’s amazing what I have learned and how they treated me so far. The outside noise doesn’t bother me at all. I am just worried about what these guys feel about me. And it’s amazing. They love me and I love these guys.” 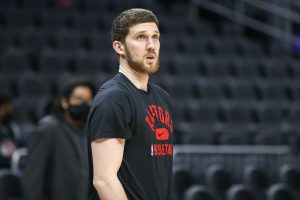 11:06am: The Raptors are waiving Svi Mykhailiuk, according to Shams Charania of The Athletic (Twitter link), who says the veteran shooting guard will seek a “fresh start” with a new club.

Currently suiting up for Ukraine’s national team, Mykhailiuk spent the 2021/22 season with the Raptors after signing a two-year, minimum-salary deal with the team last almost exactly one year ago.

Following his down year, Mykhailiuk exercised his player option for 2022/23, but his spot on the Raptors’ roster for the coming season always appeared tenuous. Toronto has a number of viable candidates for back-end spots on its 15-man regular season squad and has enough breathing room below the luxury tax line to eat Mykhailiuk’s $1,878,720 guaranteed salary and carry another player without becoming a taxpayer.

Once Mykhailiuk is officially waived, the Raptors will have 13 players on guaranteed contracts, with Dalano Banton, D.J. Wilson, and Justin Champagnie also vying for roster spots on partially guaranteed deals.

Additionally, Toronto still has two-way qualifying offers out to David Johnson and Jalen Harris, despite having filled its two-way slots with Jeff Dowtin and Ron Harper Jr. — it remains possible that Johnson and/or Harris will factor into the 15-man roster competition. Gabe Brown is also in the picture, but he’s on an Exhibit 10 contract and would probably need to have a huge preseason to earn real consideration for a regular season roster spot.

If the Raptors officially cut Mykhailiuk this afternoon, he’ll clear waivers and become an unrestricted free agent on Wednesday, assuming he goes unclaimed.

Mykhailiuk, 25, signed with the Raptors last summer after spending his first three NBA seasons with the Lakers, Pistons, and Thunder. He played a limited role in Toronto, averaging 4.6 PPG and 1.6 RPG with a career-worst .306 3PT% in 56 games (12.8 MPG) and falling out of the rotation by January.

The former Kansas Jayhawk showed an ability to knock down three-pointers more consistently during his first three years in the NBA, making 36.2% of his attempts from beyond the arc during that time.

Now that Mykhailiuk is locked in for next season, the Raptors have nine players on guaranteed salaries, plus Dalano Banton and Armoni Brooks on partial guarantees.

However, if Mykhailiuk isn’t in Toronto’s plans going forward, it’s possible he could be traded or even waived at some point this offseason. Given his modest cap hit, it shouldn’t be all that difficult to find a taker if the Raptors take that path.

The Raptors aren’t actively looking to trade forward OG Anunoby, Michael Scotto said in the latest episode of The HoopsHype Podcast. According to Scotto, it would require a “substantial” return for Toronto to consider moving Anunoby, along the lines of a significant upgrade at center or a top-10 draft pick. That’s similar to what Jake Fischer has recently reported.

Scotto’s guest, Blake Murphy of Sportsnet 590 The Fan, agrees that it would take “a lot” for the Raptors to seriously considering moving Anunoby, noting that assistant GM Dan Tolzman recently expressed skepticism when asked if the No. 7 pick in this year’s draft would develop at the same rate and with the same ceiling as Anunoby.

While Murphy acknowledges that Anunoby would be an obvious trade candidate if the Raptors attempt to trade for an impact player, he believes the team would rather enter the 2022/23 season without a traditional center than include Anunoby in a trade for a center who isn’t as well-rounded and versatile a player as the 24-year-old forward.

Murphy and Scotto also point out that Toronto is high on Precious Achiuwa, whose role would be cut back if the team added a starting center to play 30-35 minutes per night.

Rudy Gobert has entered the league’s health and safety protocols. The Jazz center returned two rapid negative tests on Thursday but his PCR test overnight came back positive, according to Tony Jones of The Athletic (Twitter links). Of course, Gobert’s COVID-19 positive in March 2020 led to postponements and cancellations across the sports world. The big man is having another fine season, averaging 15.5 PPG and 15.1 RPG.

We have more on players entering or exiting the health and safety protocols:

After briefly having no players in the NBA’s health and safety protocols for the first time in weeks, the Raptors placed Svi Mykhailiuk and Yuta Watanabe in the protocols today, tweets Eric Koreen of The Athletic.

According to Josh Lewenberg of TSN.ca (via Twitter), only three players on the Raptors’ roster have avoided entering the protocols in the last month. Two of those players – David Johnson (injury) and Goran Dragic (personal) – have been away from the team, leaving Chris Boucher as the lone active player not to be affected.

The fight to make the Raptors‘ 15-man regular season squad has been one of the NBA’s more competitive preseason roster battles, with Sam Dekker, Ishmail Wainright, and Isaac Bonga vying to earn two spots (or just one, if Toronto opens the season with 14 players). Addressing the competition today, Dekker said he’ll be happy for Wainright and/or Bonga if they beat him out for a roster spot.

“These are guys I’ll stay in touch with for a long time no matter what and I’m always going to cheer for them, because it’s the weakness of a man to root for someone to fail,” Dekker said, adding that his current teammates are some of the “kindest human beings” he knows (Twitter link via Josh Lewenberg of TSN.ca).

Wainright also expressed gratitude for the opportunity to make his case for a regular season roster spot, regardless of what the Raptors decide.

“No matter how it goes, I’m not going to hang my head,” Wainright said (Twitter link via Lewenberg). “My family always told me when one door closes, another opens. I’m coming out of this a better man, a better basketball player, a better person, period… Whatever happens, I gave it my all from start to finish.”

All three players have had strong camps, according to Lewenberg (Twitter link). While many teams will set their rosters by Saturday, the Raptors could wait until Monday if they want, since Dekker, Wainright, and Bonga all have partial guarantees. That means their cap hits would remain unchanged if they don’t clear waivers until after the regular season begins, unlike a player on a non-guaranteed deal, who must be waived by Saturday for a team to avoid incurring a small cap charge.