5:56pm: Conley could return sooner than two weeks, Eric Walden of the Salt Lake Tribune tweets. His injury will be reevaluated when the Jazz return to Salt Lake City on Tuesday after the team faces the Clippers on Monday.

The franchise is actually relieved the injury isn’t worse. Conley, who underwent an MRI on Sunday, avoided ligament damage during the non-contact injury that occurred after he played nine minutes against Portland on Saturday. Conley said he felt his leg lock up as he tried to get around a screen.

Conley is averaging 10.2 points and 7.9 assists per game for the surprising Jazz this season. He’s battled numerous injuries in recent seasons, though he was able to start 72 regular season games for Utah in 2021/22. During the six previous seasons, four with Memphis and two with Utah, Conley appeared in 70 or more games just once.

Collin Sexton figures to take Conley’s starting spot for the time being, though Nickeil Alexander-Walker, Malik Beasley and even Talen Horton-Tucker could see more backcourt time.

The Jazz may have to survive for a while without starting point guard Mike Conley, who left Saturday’s game with a knee injury, writes Andy Larsen of The Salt Lake Tribune. The team is awaiting the results of an MRI to determine the full extent of the damage.

Conley explained to Eric Walden of The Salt Lake Tribune (Twitter link) that the injury was non-contact and happened as he tried to get around a screen. Conley said he felt his leg lock up and he did a mental check to determine what was causing the pain. On-court ligament tests were encouraging, Walden adds.

Conley was limping in the locker room after the game, but he told staff members that the media saw him immediately after he was icing the knee. The limp was mostly gone by the time he got on the team plane, according to Larsen.

This year’s Lakers Night at Dodger Stadium included an unexpected surprise for Talen Horton-Tucker, writes Kyle Goon of The Orange County Register. Horton-Tucker was at the ballpark for the August promotion when news broke that he was being sent to the Jazz as part of a trade for Patrick Beverley. The deal ended his time in L.A. just one season after re-signing as a restricted free agent.

A second-round pick in 2019, Horton-Tucker spent three seasons with the Lakers and earned rotation minutes during the last two. He won a championship ring in 2020 and said he learned a lot by breaking into the NBA on a team with so many established veterans.

Unlike the Lakers, Utah isn’t built around stars, especially after parting with Rudy Gobert and Donovan Mitchell in offseason trades. Horton-Tucker believes part of the explanation for the team’s 7-3 start is that so many players are eager to show what they can do.

“I feel like guys are hungry to prove they’re good,” he said. “And I feel like we know that we’re good. We got NBA players. So we feel like we can compete with pretty much anybody. So being able to have a team like that, to have an attitude coming into games adds to everything else.”

The rebuilding Jazz have enjoyed a surprising 4-1 start to their 2022/23 NBA season, but still seem likely to trade several of their veteran players prior to February’s deadline. That said, Zach Lowe of ESPN suggested in his podcast The Lowe Post that the team is hesitant to offload 2021 Sixth Man of the Year Jordan Clarkson, who has thrived thus far this year.

“I’ve heard the same stuff that other people have reported, that they are just super reluctant to move Clarkson,” Lowe said on the podcast (hat tip to RealGM). ”They’re really fond of him for whatever reason. So, I would peg him as the least likely of all these Jazz guys to get traded.”

The Warriors are optimistic that second-round pick Ryan Rollins will be ready for training camp, according to Shams Charania and Anthony Slater of The Athletic.

Rollins, who signed a three-year contract in July, was diagnosed with a stress fracture in his right foot shortly after the draft. The Warriors will know more about his status during the next couple of weeks as he ramps up his rehab.

We have more Western Conference info:

Before the Lakers traded Talen Horton-Tucker to the Jazz in the Patrick Beverley deal, the Pacers expressed interest in the 21-year-old wing, Michael Scotto said in the latest episode of the HoopsHype podcast.

As Scotto explains, the Pacers were interested in pursuing a deal that sent Buddy Hield, Myles Turner, and Daniel Theis to the Lakers in exchange for Russell Westbrook, Horton-Tucker, and Los Angeles’ 2027 and 2029 first-round picks. However, L.A. has been reluctant to include both of those first-rounders in any deal not involving Kyrie Irving, and wasn’t particularly enthusiastic about swapping Horton-Tucker for Theis.

Although Horton-Tucker is off the table, Indiana remains one of the two most likely landing spots for Westbrook, according to Jovan Buha of The Athletic, who says a deal involving the Pacers and Westbrook could involve just one of Hield or Turner — the Pacers still have $30MM+ in cap room and could take on Westbrook’s $47MM+ expiring contract without sending out both players. Still, Buha believes that Utah is a more viable destination for Westbrook than Indiana.

Here’s more on the Lakers from the HoopsHype podcast:

It remains very possible that the Lakers move Russell Westbrook in a trade before the 2022/23 season begins, but if Rob Pelinka and his front office can’t find a deal they like, new head coach Darvin Ham is determined to “carve out a real role” for Westbrook, Marc Stein writes at Substack.

Sources tell Stein that the Lakers have thus far resisted the idea of taking the John Wall route with Westbrook and having him sit at home while he remains under contract with the team. The Rockets took that approach with Wall last season and spent the season exploring the trade market before eventually reaching a buyout agreement with the veteran point guard this summer, when he had one year left on his contract. Westbrook is entering the final year of his own deal.

As Stein observes, there were indications on social media last week that the Lakers are prepared to incorporate Westbrook if he’s not traded in the coming weeks. LeBron James tweeted that he expects his teammate to “go off” this season, and the Lakers’ official Twitter account included Westbrook in a series of videos and photos of players’ offseason workouts.

Here’s more from Stein on the Lakers:

Veteran point guard Patrick Beverley has had quite the jet-setting summer. He was involved in a second offseason trade today when the Lakers acquired him from the Jazz, who had landed him as part of their return package for Rudy Gobert. Los Angeles sent Utah swingman Talen Horton-Tucker and forward Stanley Johnson in the exchange.

Due to his involvement in that Gobert trade, Beverley couldn’t have be been aggregated with the contract of another player prior to September 6 this year, when his aggregate restriction expires. However, as Bobby Marks of ESPN (YouTube video link) notes, the Jazz didn’t have to wait until September to move Beverley because he was traded on his own in the deal with the Lakers.

Marks opines that the 6’4″ Horton-Tucker – whom Marks considers essentially a small forward more than a shooting guard – and the 6’6″ Johnson, who played mostly at power forward with L.A., are the better players in the deal and says their athletic upside is worth the risk for the Jazz. However, Marks believes that, as long as he is able to stay healthy, Beverley will be a better fit with Los Angeles than Horton-Tucker or Johnson proved to be.

2:10pm: The trade is now official, the Jazz announced in a press release. 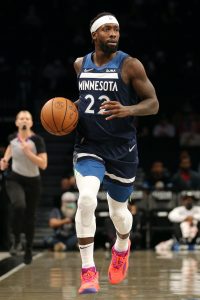 5:39am: The Lakers and Jazz are finalizing a trade that will send guard Patrick Beverley to Los Angeles in exchange for Talen Horton-Tucker and Stanley Johnson, reports Adrian Wojnarowski of ESPN. Sources tell Wojnarowski that the deal is on track to be completed on Thursday.

Beverley, 34, is a talented perimeter defender who can be a positive contributor on offense as well. He helped get the Timberwolves back to the playoffs last season, averaging 9.2 points, 4.6 assists, and 4.1 rebounds per game in 58 appearances (25.4 MPG). He’s also a career 37.8% three-point shooter across 10 NBA seasons.

Beverley, who is on an expiring $13MM contract, was traded from Minnesota to Utah as part of the Rudy Gobert blockbuster last month. However, he was always viewed as a candidate to be flipped to a new team, given that the Jazz are in retooling mode.

According to Wojnarowski, Beverley – who was in Los Angeles as a Clipper from 2017-21 – was enthusiastic about the idea of joining the Lakers in a trade and was “thrilled” to learn of the agreement between L.A. and Utah.

The Lakers had long been viewed as a potential suitor for Nets point guard Kyrie Irving, who was considered the team’s top trade target this offseason. However, once Kevin Durant withdrew his trade request and it became clear that Irving would likely remain in Brooklyn, Los Angeles pivoted to acquiring another point guard without having to include Russell Westbrook and draft compensation in the deal.

Both the Lakers and Jazz are candidates to make additional deals before the season begins.

L.A. still has Westbrook and its 2027 and 2029 first-round picks to dangle in trade discussions, and the idea of making a play for the Pacers duo of Buddy Hield and Myles Turner is even more intriguing now that the club has fortified its backcourt by agreeing to acquire Beverley. For now, the Lakers have $34MM in cap room for the summer of 2023, per ESPN’s Bobby Marks (Twitter link), which will be a factor the team considers as its weighs additional trades.

LeBron James became eligible on Thursday to sign a one- or two-year contract extension. While the Lakers and James have next June 30 — the day before James would become an unrestricted free agent — to reach an agreement, ESPN’s Dave McMenamin indicated on NBA Today that there’s mutual interest in getting an extension done (video link).

“All signs point toward both sides looking to extend their partnership together,” McMenamin said, adding “Overall, both sides recognize they can help one another get to their mutual goal, which is to compete at a high level and stay relevant.”

James and his representative, Rich Paul of Klutch Sports, met with Lakers GM Rob Pelinka and head coach Darvin Ham at the team’s practice facility on Thursday. Paul told McMenamin that they were “productive talks” and he “expects them to continue.”