Within an in-depth feature by Howard Beck of SI.com, Pelicans star Zion Williamson said that he was in “dark places at times” while he spent last season recovering from a broken foot.

“I couldn’t play basketball. I could only do limited rehab things. And then just seeing how the world reacted? It took a lot. It did a lot on my spirit,” Williamson said, acknowledging that the criticism he faced from outside observers took a toll on him and his family.

Having leaned on assistant coaches Teresa Weatherspoon – whom Williamson described as being “like a big sister” – and Corey Brewer to help get him through the year, the former No. 1 overall pick believes he’s grown a lot and is in a much better place heading into the 2022/23 season, both mentally and physically.

After signing a five-year, maximum-salary extension with the Pelicans in the offseason, Williamson has also gotten a reprieve from questions about his commitment to New Orleans. Speaking to Beck, the fourth-year forward laughed off the speculation that he’d want to leave the Pelicans after getting a first-hand look at the team’s second-half surge and playoff appearance last season.

“People really out here think that I could witness something like that and then tell myself I don’t want to be (there)?” Williamson said.

Here’s more on Zion and the Pelicans:

The Pelicans have reached a deal with veteran coach Mike D’Antoni that will make him a coaching consultant to Willie Green and his staff in 2021/22, sources tell Adrian Wojnarowski of ESPN. The plan is for D’Antoni to periodically spend time with the Pelicans’ coaching staff during Summer League, training camp, and the season, according to Wojnarowski.

Word broke last week that D’Antoni, who spent last season as an assistant on Steve Nash‘s staff in Brooklyn, would be stepping away from his role with the Nets. However, reports at the time indicated that he wasn’t retiring and still hoped to land a head coaching job in the future.

D’Antoni, whose most recent head coaching gig was with the Rockets up until 2020, has coached five different NBA teams and ranks 21st on the league’s all-time list with 672 regular season wins. However, at age 70, he may be running out of time to get another shot. Only two head coaches in NBA history – including current Spurs coach Gregg Popovich – have held that role into their 70s, according to HoopsHype.

Meanwhile, the Pelicans are also hiring Jarron Collins as an assistant coach, according to Christian Clark of NOLA.com. He’ll be the team’s lead assistant, tweets Marc J. Spears of The Undefeated.

Collins spent the last seven years as an assistant in Golden State, but he and the Warriors agreed to part ways in June. Collins, who has received some head coaching interest in recent years, worked with Green from 2016-19 when both men were members of Steve Kerr‘s staff.

The Pelicans have issued a press release confirming the hirings of D’Antoni – whose title is “coaching advisor” – and Collins. The team will also bring back several other assistants, including Fred Vinson, Teresa Weatherspoon, and Casey Hill.

Before the Pelicans decided to hire Willie Green as their new head coach, they were looking hard at Nets assistant Jacque Vaughn, who ultimately removed his name from consideration.

At the time, Vaughn’s desire to spend more time with his family in Brooklyn was cited as the motivating factor for his decision to withdraw, but Jake Fischer of Bleacher Report suggests that Vaughn’s discussions with Pelicans executive VP of basketball operations David Griffin also played a part. During those conversations, Griffin conveyed that he intended to be involved in determining the team’s rotation, planning players’ skill development, and filling out Vaughn’s coaching staff.

“He wants to have some level of involvement in every decision,” one Pelicans source said of Griffin, per Fischer.

Here’s more out of New Orleans:

Pelicans officials determined that Stan Van Gundy’s style was not a match for the team’s young core and that contributed to the decision to fire the veteran head coach after just one season, according to Jake Fischer of Bleacher Report.

Parting ways with Van Gundy was also a means of currying favor with Zion Williamson, Fischer adds. Griffin had urged Van Gundy to make Williamson more of a lead ball-handler in the team’s offensive scheme.

We have more on the Pelicans:

11:08am: The Pelicans have officially announced Van Gundy’s exit, stating in a press release that the two sides mutually agreed to part ways. 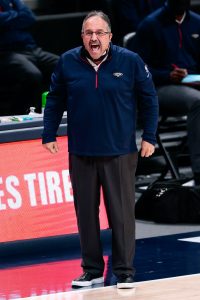 “On behalf of Mrs. Gayle Benson and the Pelicans organization, I would like to thank Stan for the integrity and professionalism that he demonstrated during his time in New Orleans, as well as the commitment and work ethic he brought to our team,” Griffin said in a statement. “This was a difficult decision as I have tremendous respect for Stan both personally and professionally, but we agreed it is in the best interest of our team to move forward in a different direction. We wish Stan, Kim and their family all the best in the future.”

9:57am: Stan Van Gundy will not return to the Pelicans for the 2021/22 season, according to Adrian Wojnarowski and Andrew Lopez of ESPN, who report (via Twitter) that Van Gundy is out after just one year as New Orleans’ head coach.

Van Gundy and Pelicans executive VP of basketball operations David Griffin have met regularly since the end of the regular season to discuss the team’s future, and a divorce between the team and its coach began to feel like an inevitable outcome around the organization, tweets Wojnarowski.

Van Gundy, who previously coached the Heat, Magic, and Pistons, spent a couple years as an NBA analyst from 2018-20 before returning to the head coaching ranks in 2020, when he was hired by the Pelicans. He had a disappointing season in New Orleans, however — a team that entered the year with playoff aspirations finished with a 31-41 (.431) record, missing the play-in tournament.

Replacing Alvin Gentry on the Pelicans’ sidelines, Van Gundy emphasized improving the team’s defense, but failed to do so, writes Christian Clark of NOLA.com. New Orleans ranked 23rd in points allowed per 100 possessions, two spots worse than in 2019/20. The Pels also had trouble closing out games, losing 14 times when they held a double-digit lead.

Clark writes that Van Gundy struggled to connect with many of the Pelicans’ young players, who didn’t adapt well to the drastic shift from Gentry’s coaching style to Van Gundy’s. Sources tell NOLA.com that Van Gundy’s relationship with star forward Brandon Ingram was “strained” for much of the season.

Van Gundy joins Nate Bjorkgren, formerly of the Pacers, as the head coaches who were let go this spring after just one year on the job.

The fifth team to launch a head coaching search since the regular season ended, the Pelicans are expected to look both inside and outside of the organization as they seek Van Gundy’s replacement.

Several reporters – including Kevin O’Connor of The Ringer, Will Guillory of The Athletic, and Marc Stein of The New York Times (all Twitter links) – say that current Pelicans assistant Teresa Weatherspoon is a strong contender for the position, while O’Connor also identifies Fred Vinson as a candidate.

As for external candidates, Wojnarowski names Bucks assistant Charles Lee, Lakers assistant Jason Kidd, and Nets assistants Jacque Vaughn and Ime Udoka as possibilities, noting that the Pelicans considered some of those coaches a year ago before hiring Van Gundy.

Van Gundy, meanwhile, could receive some consideration from the other four teams with head coaching openings, but may prefer to step away again after a trying season. A return to broadcasting is one possibility for the veteran coach.

The Pelicans announced on Monday they have hired Bob Beyer, Casey Hill, and Rex Walters to join Stan Van Gundy’s staff, according to a team press release.

The addition of Beyer was previously reported and comes as no surprise. Beyer has a long history with Van Gundy, serving as an assistant in Orlando and Detroit for a combined nine seasons. He was on the Kings’ staff last season.

Hill was an assistant with the Clippers the past two seasons. Walters had a stint on Van Gundy’s staff in Detroit and served as an assistant at Wake Forest last season.

In another significant development, Van Gundy has promoted former WNBA great Teresa Weatherspoon to the staff. She was a two-way player development coach last season in New Orleans.

The Pelicans have become the latest NBA franchise to add a female assistant coach to their ranks, announcing today in a press release that WNBA Hall-of-Famer Teresa Weatherspoon has joined the franchise as a player development coach.

According to the Pelicans, Weatherspoon and newly-hired coach A.J. Diggs will serve as two-way assistant coaches, working closely with the club’s two-way players and accompanying them as they go back and forth between the Pelicans and the Erie BayHawks. Currently, New Orleans’ two-way players are Josh Gray and Zylan Cheatham.

Weatherspoon is the second former WNBA star to be hired the Pelicans this offseason, joining Swin Cash, who was named the club’s VP of basketball operations and team development.