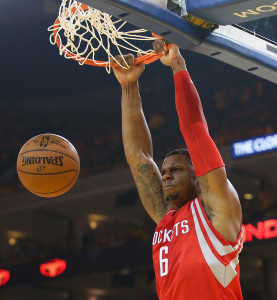 How much will it cost to keep Terrence Jones in Houston? Probably more than the Rockets are willing to spend.

Entering his fourth season, Jones is eligible to receive a rookie scale extension through November 2nd, and Grantland’s Zach Lowe speculates that the 23-year-old Kentucky product’s asking price could be as high as $15MM annually. It’s a daunting number — even considering the expected jump in the salary cap next summer — for a player with limited NBA production.

Injuries caused Jones to miss 49 games last season. He sat out 41 with nerve damage in his left foot, then several more after suffering a partially collapsed lung in March. When he did play, he showed flashes of why that $15MM figure might be attainable, averaging 11.7 points and 6.7 rebounds per game and making slightly more than 35% of his shots from 3-point range. His numbers dipped slightly in the playoffs, but Jones started 9 of 17 games and averaged 23.6 minutes of playing time for a team that reached the Western Conference Finals.

Offensively, Jones is very much a product of the system in which he plays. The Rockets believe in getting their shots near the basket and beyond the 3-point arc. Over his career, Jones takes about half of his shots from within 3 feet and connects on about 70% from that area, according to Basketball Reference. He has the size and leaping ability to become a better finisher and improve that number as he gets older. He was 13 of 37 from long distance during his abbreviated regular season in 2014/15, although that figure dipped to a dismal 3 of 19 (.158) during the playoffs.

Jones has shown potential as a rebounder, averaging close to 7.0 per game over the past two seasons while playing alongside two of the best rebounding centers in the league in Dwight Howard and Omer Asik. However, there are questions about his defense, which has been exposed in the last two postseasons, particularly by the Clippers’ Blake Griffin and former Trail Blazer LaMarcus Aldridge. ESPN’s Defensive Real Plus Minus ranked Jones 38th in the league last season among power forwards, right behind Spencer Hawes, Luis Scola and Elton Brand.

While Jones seems eventually headed toward a big payday — a 6’9″ athlete who can rebound and stretch the floor is very popular in the NBA right now — it’s not guaranteed that contract will come from Houston and it’s less certain that he’ll get it this summer. Even with a projected salary cap of $89MM for 2016/17, the Rockets aren’t likely to have much money available to dish out. If the team picks up the option on young center Clint Capela, Houston is looking at about $44.5MM in committed salary, not counting Howard, who has a player option worth $23.3MM, or Ty Lawson, whose contract includes more than $13.2MM in non-guaranteed money. In addition, Donatas Motiejunas, another young Rockets power forward with a career similar to Jones’, is also eligible for an extension this summer, as we examined earlier, giving the franchise a difficult decision at that position.

There’s also the possibility that either Jones or Motiejunas could be traded, if not both. The Rockets were rumored to be shopping Jones and the 18th pick in this year’s draft (which became Wisconsin’s Sam Dekker) in order to create cap room to pursue Aldridge or Kevin Love. Houston, which spent the summer stocking up on young forwards, certainly isn’t acting like a team ready to make a long-term commitment to either Jones or Motiejunas. In addition to drafting the 6’7″ Dekker, who has potential as a stretch four, the Rockets used a second-round pick on 6’8″ 236-pound rebounding beast Montrezl Harrell, who projects as a power forward, and gave a three-year, $10MM deal to second-year player K.J. McDaniels. The Rockets have a long track record of maintaining cap flexibility to chase marquee free agents, and could pursue former Harden teammate Kevin Durant or another of the top 2016 free agents.

Jones, a Wasserman Media Group client, could be facing a tough choice of his own. Steve Kyler of Basketball Insiders believes that a deal will be available in Houston for Jones, but only if he places long-term security ahead of gambling on his potential worth. As Kyler points out, Rockets GM Daryl Morey has a history of letting players enter restricted free agency and allowing the market to set their values. However, if Jones is willing to settle for a lesser deal, a bargain-conscious Morey might be tempted to sign him this summer. Kyler believes the odds are good that Jones will wind up as a restricted free agent, but with health concerns already cropping up at such a young age, his best option may be to take a long-term deal while he can get it.