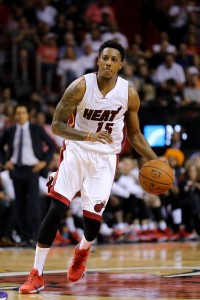 5:10pm: The trade is official, the Heat and Grizzlies have announced, though no mention was made of a second-rounder changing hands in the deal. “This is a tough day for myself and the organization in trading Mario Chalmers and James Ennis,” said Heat president Pat Riley. “Mario was a part of two championships with us and Ennis is a solid young player, but it is part of the business and it was a move necessary to make because of our crowded backcourt. We feel that it is in the best interest of Mario and we want him to be successful and be a part of a good team. We wish them nothing but the best. We would also like to welcome Beno Udrih, an accomplished veteran and someone that has playoff and championship experience, and the addition of Jarnell Stokes, a young player that we would like to develop.”

4:04pm: The Heat don’t see either Udrih or Stokes as long-term pieces, but they’d still execute the two-team trade with the Grizzlies if they can’t find a third team, Stein writes. The ESPN scribe also invokes Andersen’s name, suggesting that he remains available.

2:57pm: The Heat are looking for a third team willing to take Udrih, Stokes or both, and that’s keeping the deal with the Grizzlies from becoming official, reports Marc Stein of ESPN.com (Twitter links). Miami has the option of simply pulling off the two-teamer with Memphis, but the Heat would prefer to include a third team, Stein adds.

12:27pm: The Grizzlies and Heat are have agreed to a deal that will send Mario Chalmers and James Ennis to Memphis for Beno Udrih, Jarnell Stokes and a second-round pick, reports Adrian Wojnarowski of Yahoo Sports (Twitter links). Wojnarowski’s full story indicates Miami is receiving a second-round pick from Memphis, too, but it makes no mention of, who was in Wojnarowski’s Twitter report, which didn’t include the second-rounder. In any case, the teams are preparing for a trade call with the league office today, Wojnarowski notes. Marc Stein of ESPN.com first reported a week ago that the sides had talked about a potential trade involving Chalmers, and a few days later Stein wrote about growing concern within the Grizzlies organization amid a slow start. Memphis, at 3-4, next plays Wednesday at home against the Warriors.

The move is a cost-cutter for the Heat, who give up the $4.3MM salary of Chalmers in exchange for Udrih and his pay of $2.17MM, which is only a little more than half of what Chalmers makes. Stokes and Ennis are have identical one-year veteran’s minimum salaries, though Stokes has a full guarantee while Ennis has a partial guarantee of only about $254K, since he and the Heat reworked the terms of his contract before the start of the regular season. Memphis will likely use part of its $967,500 trade exception left over from the offseason Jon Leuer deal to absorb the $845,059 that Stokes makes and offset the unbalanced exchange of salaries, notes Eric Pincus of Basketball Insiders (on Twitter).

Miami is set to remove about $6MM from its potential luxury tax bill with the trade, according to Wojnarowski, though the tax isn’t calculated until the final day of the regular season. The Heat would still be in line to pay repeat-offender tax penalties in the wake of today’s deal, and many of the same offseason rumors that raised the idea of a Chalmers trade also made mention of Chris Andersen, who could be the next to go, as Ira Winderman of the Sun Sentinel speculates (Twitter link).

Memphis hasn’t been pleased with the play of its bench and hopes that Chalmers will be an upgrade behind starting point guard Mike Conley, league sources told Wojnarowski. Ronald Tillery of The Commercial Appeal had heard from some people, ostensibly around the Grizzlies, who quietly expressed disappointment with what they perceived to be Udrih’s lack of conditioning, athleticism and defense, and the team wasn’t ready to turn the backup job over to third-stringer Russ Smith, Tillery also wrote.

A desire to avoid the tax plus confidence in Tyler Johnson and Gerald Green helped prompt the Heat to make the move, according to Barry Jackson of the Miami Herald (Twitter link), though Green remains away from the team following his hospitalization last week. Green is out of the hospital and is reportedly expected to return to the team soon, however. In any case, the acquisition of Udrih gives the team an experienced backup at the point as it attempts to regain its status among the Eastern Conference elite, even with the concerns about Udrih from Memphis. Of course, no guarantee exists that the team won’t flip Udrih to further its efforts to dodge the tax, tweets Ethan Skolnick of the Miami Herald.

Chalmers first became a trade candidate in June, when Ramona Shelburne and Brian Windhorst of ESPN.com reported that the Heat were shopping him and Andersen to try to clear room for a new deal with Dwyane Wade. Team president Pat Riley denied that, ESPN’s Zach Lowe heard in July that Chalmers and Andersen could be had “for nothing” in return, which speaks to the idea that the Heat wanted their salaries off the books. Miami had apparently backed away, at least temporarily, from the idea of a Chalmers trade by late August, but at that point they wouldn’t rule out a deal as soon as October, as Barry Jackson of the Miami Herald reported.

The Grizzlies have to renounce cap holds for unsigned free agents from years past who didn’t return to the NBA, notes former Nets executive Bobby Marks (All Twitter links). The cap holds they’re renouncing are the ones for Gilbert Arenas, Leon Powe, Stephen Hunter and Marcus D. Williams, according to Chris Herrington of The Commercial Appeal (Twitter link). That’s because those cap holds technically put the Grizzlies over the tax line, which would mean they could only take in 125% plus $100K of what they sent out — not enough to accommodate this deal, as Marks explains. Renouncing the cap holds would up that limit to 150% plus $100K, which allows the trade to take place, Marks notes.

Which team do you think is getting the better end of this deal? Leave a comment to let us know.