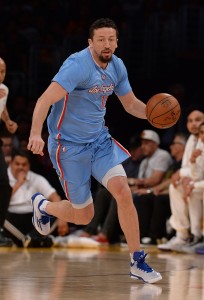 9:03am: The Magic have confirmed Turkoglu’s retirement with a press release that includes a statement from their longtime player.

“I am very thankful and grateful for the opportunity to live out my dream and play in the NBA,” Turkoglu’s statement reads. “I will always remember my teammates, coaches, staff members and all of the fans who made my career so wonderful for myself and my family.”

8:00am: Free agent combo forward Hedo Turkoglu has decided to retire, according to Erce Esmer of Trendbasket.net in Turkoglu’s native Turkey (Twitter link). The 15-year NBA veteran hoped over the summer to continue his career in the league, but while Kings, with former teammate Vlade Divac running the front office, emerged as a possibility, no deal materialized for the 36-year-old Jim Tanner client. He’ll assume greater responsibilities with the Turkish basketball federation now that he’s stepping away from the court, Esmer says.

Turkoglu was a key complementary player on Sacramento’s title-contending teams in the early 2000s and again on the Dwight Howard-led Magic, with whom Turkoglu made his lone NBA Finals appearance in 2009. He made his mark as a strong outside shooter, nailing 38.4% of his career 3-point attempts, and as a passer, with his teams often using him as a point forward. His best statistical season came in 2007/08, when he posted 19.5 points, 5.7 rebounds and 5.0 assists in 36.9 minutes per game for Orlando. All those numbers are career highs.

The former 16th overall pick is not far removed from his career-best season from behind the arc, as he shot 44.0% on 3-pointers for the Clippers in 2013/14. He was almost as accurate last season, at 43.2%, but he wasn’t in the rotation for the playoffs this past spring, and the Clippers made it a priority to retool their bench.

He was an instant contributor after the Kings drafted him in 2000, joining the rotation for 16.8 minutes per game as a rookie, but Sacramento traded him to the Spurs three years into his career. He spent one season in San Antonio before leaving as a free agent for Orlando, where joined Howard for his rookie year and the pair blossomed together. He left via sign-and-trade for the Raptors after the Magic’s 2009 Finals berth, but he struggled in Toronto, which traded him to the Suns in the summer of 2010, and the Magic swung a deal to reacquire him just 18 months after having parted ways with him. He spent an additional two-plus seasons in a Magic uniform before the team waived him in January 2014. That move allowed the Magic to pocket the savings on his partially guaranteed contract after he had played only 11 games the season before, thanks to injury and a 20-game suspension that resulted from a positive test for methenolone, a performance-enhancing drug.

He joined the Clippers at midseason in 2013/14 on a prorated minimum-salary deal, and signed another the following September to re-join the team for 2014/15. He made roughly $86MM for his NBA career, according to estimates compiled from Basketball-Reference and Basketball Insiders data.

What will your most enduring memory of Turkoglu be? Leave a comment to tell us.