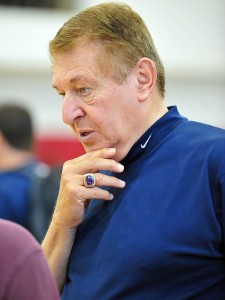 10:28pm: NBA owners have been pressuring the league’s front office since the summer of 2014 to do something about the Sixers’ rebuilding plan, sources told ESPN.com’s Brian Windhorst.

3:44pm: The Sixers have hired USA Basketball chairman and longtime NBA executive Jerry Colangelo to serve in their front office, the team announced via press release and in a press conference. Colangelo will hold the titles of Special Advisor to the Managing General Partner and Chairman of Basketball Operations. The statement doesn’t specify whether Colangelo will continue with Team USA, but he’s said in the past that he would stay through the 2020 Olympics. Sixers GM Sam Hinkie will continue in his capacity in charge of day-to-day basketball operations, owner Josh Harris said, according to Keith Pompey of the Philadelphia Inquirer (on Twitter).

Hinkie will still have the final say on personnel, though “a lot of collaboration and discussion” will be involved in the team’s roster moves, Colangelo said, according to Tim Bontemps of The Washington Post (Twitter link). The deal for the 76-year-old Hall-of-Famer to join the Sixers came together within the past week, Colangelo said, according to John Gonzalez of CSNPhilly.com (on Twitter).

“It’s not every day you have the opportunity to work alongside a Hall of Famer with Jerry’s unique set of experiences,” Hinkie said in the team’s statement. “I feel incredibly fortunate to have him as part of our organization.”

Hinkie has served as the team’s GM since May 2013, and with Harris’ support, he’s embarked on an extreme rebuilding project of the likes the NBA has never seen before. Colangelo built the Suns up from expansion as its primary basketball executive from its inception in 1968 until 1994. He won the Executive of the Year award four times.

“This is not a deviation from our plan. … We believe we are entering the next phase of our process,” Harris said, according to Jake Fischer of SI Now (on Twitter).