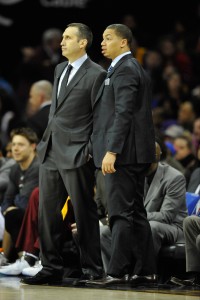 3:42pm: GM David Griffin was the catalyst for the change, a source tells Jason Lloyd of the Akron Beacon Journal (Twitter link). He didn’t consult any of the players, according to Haynes (on Twitter), and he convinced the owners that the team wasn’t performing up to expectations, Lloyd adds.

2:54pm: The Cavs have fired head coach David Blatt and reached agreement on a three-year deal with Tyronn Lue to replace him, sources tell Adrian Wojnarowski of Yahoo Sports (Twitter links here). Chris Haynes of the Northeast Ohio Media Group and the Cleveland Plain Dealer first reported that Lue, who had been serving as the team’s lead assistant, would take over the head coaching job (Twitter link). The timing of the move is a surprise, coming off the team’s win against the Clippers on Thursday, one that helped erase at least some of the memories of the team’s blowout loss to the Warriors on Monday. Discontent had been growing in the Cleveland locker room, tweets Brian Windhorst of ESPN.com, noting that the dissatisfaction dates back nearly to the beginning of Blatt’s tenure last season. Owner Dan Gilbert had been a fervent supporter of Blatt, Windhorst adds (Twitter link), but it appears the owner has finally seen fit for a change.

Chatter that LeBron James and others on the Cavs were done with Blatt had been building recently, according to USA Today’s Sam Amick, but the team’s brass didn’t consult James on the decision, according to Windhorst (on Twitter). Still, the organization knew that James likes Lue and has wanted to have a former NBA player as coach, Windhorst adds (Twitter link). James and agent Rich Paul have been strong advocates of Lue taking over for Blatt since last season, league sources tell Wojnarowski (Twitter link).

Windhorst suggested earlier this week, after the Warriors loss, that Blatt’s job hung in the balance of how well the team performed the rest of the season. Blatt said dire assessments of the team’s future in the wake of the blowout were overstated, but it appears the coach was in an even more tenuous situation than most realized.

The Cavs made Lue the highest-paid NBA assistant coach ever when they hired him to Blatt’s staff in 2014. He reportedly interviewed twice for the head coaching job before the team instead gave it to Blatt. Lue played 11 seasons in the NBA, the last of which was 2008/09. He joined the Celtics staff the next season and followed Doc Rivers to the Clippers where he continued as an assistant coach before heading to Cleveland. This will be his first job as a head coach.

Blatt went 83-40 in the regular season and 14-6 in the playoffs during his season and a half in charge of the Cavs, a team with the highest of expectations. James returned to Cleveland from his time with the Heat just weeks after the Cavs hired Blatt, and that drastically changed the nature of the job, which became a win-or-else proposition as the team moved away from rebuilding and positioned itself to win immediately.

The relationship between James and Blatt drew close scrutiny, but Blatt’s brusque personality rubbed many the wrong way, and James was far from the only one who had issues, notes Jason Lloyd of the Akron Beacon Journal (Twitter links). Still, Blatt has seemed on much more solid footing this year than he was early last season, when the Cavs started 19-20, a sluggish beginning that reportedly prompted worry from the team’s brass about the coach’s job performance.

Is changing out Blatt for Lue the right move for the Cavs? Leave a comment to tell us.