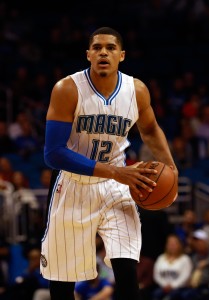 2:58pm: The Pistons have acquired Tobias Harris from the Magic for Brandon Jennings and Ersan Ilyasova, the teams have formally announced. ESPN’s Chris Broussard first reported it was a done deal shortly after Michael Scotto of SheridanHoops reported the sides were in talks (Twitter links), while Marc J. Spears of Yahoo Sports, USA Today’s Sam Amick and Josh Robbins of the Orlando Sentinel added detail (All Twitter links).

“We are pleased to welcome Tobias Harris to our organization,” Pistons GM Jeff Bower said in Detroit’s release. “Tobias adds good versatility as a ball-handler and scorer who can play both forward positions.  He also has good experience for a young player and will fit well with the young core we have assembled on our roster.  We appreciate the contributions made by Brandon and Ersan to our organization and wish them well moving forward.”

The deal represents a nearly even exchange of salaries for this season, with Harris’ $16MM going to the Pistons and $16,244,497 headed to Orlando, but a long-term cost savings for the Magic, since Jennings is on an expiring deal and Ilyasova is guaranteed only $400K for next season. Harris signed a four-year, $64MM deal this past summer.

Detroit appeared to be one of the leading contenders for Harris as free agency got underway in the offseason, but the team hadn’t emerged as a trade suitor this year until today. Marc Stein of ESPN.com reported last week that the Magic were open to trading the 23-year-old Harris, cautioning that they weren’t shopping him. However, a serious discussion took place recently between the Magic and Clippers involving Harris, Blake Griffin and other players, according to Steve Kyler of Basketball Insiders. The Magic had been on the lookout for veterans, according to Stein, and Jennings, who’s 26, and Ilyasova, 28, ostensibly fit that bill.

“Brandon and Ersan are two veterans that will help balance our roster and provide valuable experience to our team,” Magic GM Rob Hennigan said as part of his team’s statement. “Both players bring scoring, competitiveness and added depth to our roster.  We want to thank Tobias for his contributions, both on and off the court.”

Power forward has been the unsettled spot for the Pistons, who were high on Ilyasova but saw him instead as a backup, as ESPN’s Zach Lowe reported as he identified the team’s interest in Ryan Anderson. The acquisition of Harris would presumably take the Pistons out of the running for other power forwards the team has been linked to, including Markieff Morris and Al Horford, though Detroit will still have significant cap flexibility for next summer, when only about $64MM in guaranteed salaries will be on the books against a cap that many around the league reportedly believe will surge to $95MM.

The Magic meanwhile reduce their guaranteed salary commitments to only about $44MM for next season, giving them plenty of spending power. They had an open roster spot before the trade, so they didn’t have to offload anyone to make the two-for-one exchange.