OVERVIEW: Ben Simmons was the No. 1 player in his high school class and he had his choice among any of the top collegiate programs in the nation. He chose to attend LSU, in part because David Patrick, Simmons’ godfather, was an associate coach for the school. As an Australian native, he had an opportunity to present an argument to the league claiming he should be eligible for the 2015 draft, akin to Thon Maker’s situation. Simmons was quick to shoot down talk about any sort of request, reiterating his dedication to the university. Even chatter about Adam Silver changing the one-and-done rule and altering it to a required two years for college players didn’t faze Simmons. “Then I’d stay two years [at LSU],” Simmons said prior to his senior high school season. 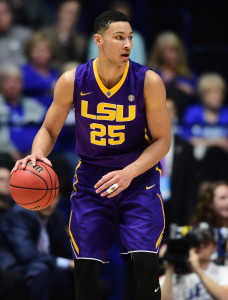 One disastrous regular season at the university proved to be enough. LSU finished the 2015/16 campaign with a record of 19-14, and the team was poised to miss the NCAA tournament. They were a lock to make the NIT, and Simmons had a chance to be one of the highest-profile players to ever play in it, but before the NCAA committee announced its selections, the school declined to participate in postseason play. Individually, Simmons dazzled as a Tiger, averaging 19.2 points, 11.9 rebounds, 4.8 assists, 2.0 steals per game. He is just one of five players over 6’9″ to average more than five assists per 40 minutes, according Jonathan Givony of DraftExpress. Still, he was not able to elevate the team to the level of a national title contender like he and many LSU fans had hoped.

STRENGTHS: Simmons is a special prospect. The awe in watching this sensational athlete comes from his natural ability on the hardwood. He runs the break masterfully, and his court vision and passing ability have drawn comparisons to LeBron James and Magic Johnson. He handles the ball extremely well for his size. You can envision him running a half-court offense, driving meticulously to the basket while drawing an additional defender near him just as he makes the crosscourt pass to an open teammate in the corner. This could be a regularity for the team that drafts him. He makes the right passes and plays a very Spursian-style game. He has excellent footwork and owns a few nice post moves. He creates contact and gets to the line often, as his 9.0 free-throw attempts per game authenticate. He’ll need to bulk up at the NBA level, but a 6’10”, nearly 240-pound frame puts him in a great position to contribute immediately. His 6’11” wingspan, coupled with his quickness and agility, will allow him to become a lock-down defender, one who can easily switch positions on pick-and-rolls, a task more and more teams are expecting their players to execute. Simmons gives you versatility on both end of the floor; he’s a true point forward. This isn’t DeMarcus Cousins bringing the ball up the court and stumbling into a set. That’s cute, but Simmons could be a big man who consistently makes plays at lighting speed on his way up the floor while evoking real fear in the transition defenders. Add in that he would be drawing an opposing big away from the basket and his value approaches tangibility.

WEAKNESSES: Outside shooting is an issue with Simmons. This was a concern heading into his freshman year, and he didn’t do much to prove the naysayers wrong in this area. Partway through the year, he essentially just stopped shooting from the outside. He attempted a total of three shots from behind the arc and it got to the point where defenders would play several feet off him and he still wouldn’t fire away. Another concern is his motor. At times, his demeanor appeared laissez-faire, lacking the passion that team leaders typically exhibit. He also played a very passive style for stretches. He wasn’t Rajon Rondo-esque selfishly unselfish, but it would have been beneficial for the way he’s perceived if he would have taken over games with his scoring more frequently.