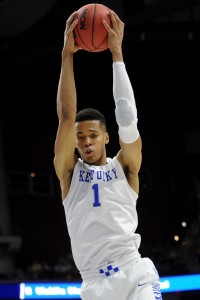 OVERVIEW: Things didn’t go so well this season for Skal Labissiere. The 7-foot, 225-pound Haitian struggled for much of his lone season at Kentucky after being a highly recruited and raw five-star prospect out of Lausanne Collegiate School, a prep school in Tennessee. Without much 5-on-5 experience, Labissiere looked physically overmatched until late in the season. Labissiere, 20, lost his starting spot by midseason but improved enough to reclaim it down the stretch. Labissiere was a preseason top-five selection, but his stock dropped because of the uneven campaign. It didn’t quite plummet, however. Labissiere is still viewed as a first-round pick.

STRENGTHS: Labissiere has great size and shown an ability to run the floor with a skill level that will likely improve on both ends of the court. He showed flashes of rare offensive moves for a 7-footer with jump hooks and turnaround jumpers. He became much more of an efficient scorer, especially from midrange, as the season progressed. One of his best games came against LSU on March 5th, when he had 18 points, nine rebounds and six blocks. Overall, Labissiere displayed nice touch inside with a fluid shot from the line and elbow. Labissiere was mostly an interior defender and provided some rim protection. His leaping ability is what set him apart before college and was an essential part of his transition with Kentucky. Labissiere registered at least four blocks in a single game on four occasions. As a long, athletic big man with solid shooting skills, Labissiere is an intriguing prospect.

WEAKNESSES: Labissiere had almost as many personal fouls (108) as he did rebounds (113) last season. His foul woes can be partially attributed to a lack of awareness at times. Labissiere also lacked strength and toughness inside, which was why he averaged only a few rebounds per game. While his shooting is a strength, Labissiere tended to rely too heavily on it and needs to develop more of a low-post game. He is likely one of the most raw prospects in the draft and is not polished by any means.