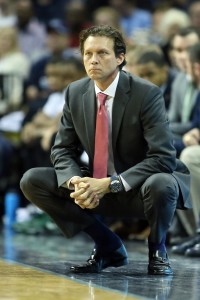 12:50pm: The Jazz had already picked up Snyder’s option, so he wouldn’t have been a lame-duck without the extension, a member of the front office told Spencer Checketts of KZNS-AM (See all of the Twitter links right here). Jazz president Steve Starks, rather than Lindsey, negotiated the extension, with Lindsey preferring not to let contract talks affect his working relationship with the coach, as Checketts also heard.

“Our relationship with Quin, and this extension, reflect our shared passion for building a championship team,” Starks said in the team statement. “With long-term contracts now in place for Quin, Dennis and other key front office personnel, we are well-positioned for the future.”

It doesn’t appear as though the extension includes any option years, Genessy adds (on Twitter).

11:19am: The Jazz have signed coach Quin Snyder to an extension, the team announced. Next season had reportedly been the final guaranteed year of the contract he signed when Utah hired him in 2014. It’s unclear how many seasons the extension covers, though the team refers to it as a long-term arrangement.

“With this contract extension, we are declaring our confidence in Coach Snyder’s ability to continue to develop the Utah Jazz into a championship team,” owner Gail Miller said in the team’s statement. “The Miller family recognizes the significant progress made under his leadership and we are excited about the direction we are headed.”

Snyder, 49, has helped the Jazz make strides in their rebuilding effort, inheriting a team that went 25-57 in 2013/14 and winning 38 and 40 games the past two seasons, respectively. The Vertical’s Adrian Wojnarowski recently pointed to the way that Snyder increases Utah’s appeal as a free agent destination through his ability to get the most out of players and inflate their market value. Rudy Gobert is perhaps the most prominent example, as the 27th pick in the 2013 draft has gone from playing 9.6 minutes per game as a rookie to a contender for a max extension when he becomes eligible to sign one this summer.

“We have continued to take significant steps as a team under Quin’s direction,” GM Dennis Lindsey said in the statement. “His work ethic, basketball intelligence and ability to connect with and develop our players make him the ideal head coach of the Jazz.”

Still, the Jazz haven’t landed any marquee free agent from elsewhere and have so far constructed their roster primarily through the draft and trades, including the swap involving Enes Kanter in February 2015 that opened playing time for Gobert. Expectations for this season were high for the Jazz after they went 19-10 following the Kanter trade, but the torn ACL that Dante Exum suffered this past summer dampened hopes and helped keep Utah from the postseason this spring. The Jazz nonetheless came close, and it wasn’t until the final night of the regular season that they were eliminated from contention for a playoff spot. The inability for Snyder to coax more out of Trey Burke loomed large. Burke, the ninth pick from the 2013 draft, was the logical choice to replace Exum as a starter this season, but the former Michigan player didn’t make a single start as Snyder instead favored wing-heavy lineups.

Regardless, the Jazz have shown enough progress for the front office to deem Snyder worthy of continued job security. The position is his first as an NBA head coach. He previously served as an assistant to Mike Budenholzer on the Hawks for one season and as an assistant to Ettore Messina on CSKA Moscow the year before that. Budenholzer was a longtime Spurs assistant and Messina is currently on San Antonio’s staff, giving Snyder multiple connections to the Gregg Popovich tree. Lindsey came to the team after five seasons with the Spurs.