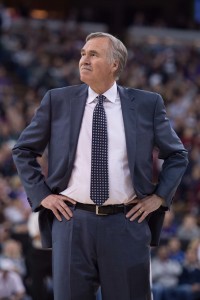 JUNE 1, 2:10pm: The Rockets formally introduced D’Antoni as their head coach at a news conference this afternoon, and confirmed his hiring in a press release. As Calvin Watkins of ESPN tweets, the team introduced Jeff Bzdelik and Roy Rogers as assistant coaches on D’Antoni’s staff.

MAY 26, 4:54pm: The deal will pay D’Antoni approximately $4MM per season, Wojnarowski writes in a full-length piece.

4:22pm: The Rockets and Mike D’Antoni are finalizing a agreement that will make him the team’s new head coach, Adrian Wojnarowski of the Vertical reports (Twitter links). It will be a four-year pact that includes a team option for the final season, Wojnarowski adds. Houston is the only team remaining in the NBA with a head coaching vacancy.

The 65-year-old has an overall record of 455-426 in the regular season as a head coach and was named as the 2004/05 Coach of the Year. With D’Antoni’s forte clearly on the offensive end, the team is looking to bring in a strong defensive coach and is eyeing  Memphis assistant Jeff Bzdelik and former Wizards assistant Roy Rogers, Wojnarowski relays (Twitter links).

The addition of D’Antoni likely spells the end of center Dwight Howard‘s tenure in Houston, with the big man widely expected to opt out of his deal and become an unrestricted free agent this offseason. The two reportedly did not get on well when both were with the Lakers and its unlikely Howard would want a repeat of their spotty history, though that is merely my speculation.

The Rockets also met with former Suns coach Jeff Hornacek, who is reportedly close to joining the Knicks, former Cavaliers coach David Blatt, Clippers assistant Sam Cassell and Rockets assistant Chris Finch. Former Pacers coach Frank Vogel and Spurs assistant Ettore Messina are also part of the process, with Messina having interviewed with the team last Saturday. Former interim coach J.B. Bickerstaff and former Rockets guard Kenny Smith were also interviewed, but Bickerstaff withdrew from consideration and Smith was told he was no longer a candidate as the Rockets decided to focus on coaches with either head coaching experience or extensive experience as an assistant. Jeff Van Gundy was also mentioned as a candidate, but he and the team never formally spoke about the post.