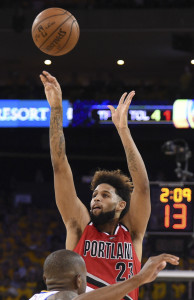 JULY 7th, 10:14pm: Crabbe has signed an offer sheet with the Nets worth $75MM over four years, Adrian Wojnarowski of The Vertical reports (via Twitter). There are performance bonuses included that can up the value of the agreement to $83MM, the scribe adds.

6:47pm: The offer to Crabbe is being refuted, tweets Sam Amick of USA Today. Crabbe will meet with the Nets on Tuesday to discuss a contract, but apparently no offer has been made.

The third-year shooting guard had a breakthrough season this year as a Trail Blazers reserve. He appeared in 81 games and averaged 10.3 points and 2.7 rebounds per night while shooting 39% from beyond the arc.

It has been a busy three days for the Nets who have also added Jeremy Lin, Justin Hamilton and Trevor Booker, while making a $50MM offer to Tyler Johnson.