JULY 15, 8:56pm: The Bulls have issued a press release officially announcing their deal with Wade.

“We are thrilled that Dwyane has decided to come to Chicago,” Bulls GM Gar Forman said in a statement. “It’s not often you get the opportunity to add a three-time champion and 12-time All Star to your roster. We are delighted he has decided to become a Bull, as he provides a great veteran perspective on the court and in the locker room. He will be a tremendous fit with our team.” 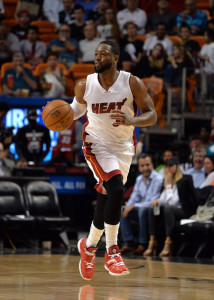 8:30pm: Dwyane Wade has informed the Bulls that he plans to sign with the team, Adrian Wojnarowski of The Vertical reports. Wade’s deal will be for $47MM over two seasons. Chicago was the only place Wade could see himself playing outside of Miami, as people close to the shooting guard told Brian Windhorst of ESPN.com (Twitter link). The deal is pending, as Chicago will need to clear cap space to accommodate a significant contract for the 34-year-old.

The Bulls are working to trade Jose Calderon and Mike Dunleavy in an attempt to clear space. The team has a trade in place for Calderon, according to K.C. Johnson of the Chicago Tribune, and Marc Stein of ESPN.com reports via Twitter that the Nets could be a potential trade partner. The Bulls remain confident that they will be able to move Dunleavy before the night is over, Johnson adds on Twitter.

Wade felt the team no longer appreciated him and that, coupled with bitterness over contract talks, led to his departure, sources tell Wojnarowski. The Heat were unwilling to offer a third year, which also factored into Wade not re-signing. Wade is a Chicago native who grew up idolizing Michael Jordan, as Wojnarowski writes.

The Bulls believe having Wade on the roster will not only offer a more competitive team during the 2016/17 season, but it will also help them land a marquee free agent next summer, Johnson tweets. Johnson tweeted earlier in the day that Wade could choose the Bulls without a face-to-face meeting since he met with the team twice back in 2010.

The Heat selected Wade with the No. 5 overall pick in the 2003 draft. He led the team to three NBA titles and five Eastern Conference crowns. The 12-time All-Star will head to Chicago and join Jimmy Butler and newly signed point guard Rajon Rondo in the backcourt.