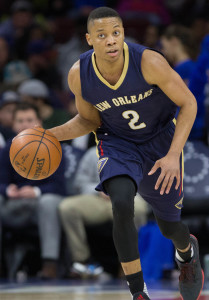 JULY 10, 12pm: Free agent point guard Tim Frazier is close to re-signing with the Pelicans, posts Marc Stein on ESPN Now. Shams Charania of The Vertical reports (via Twitter) that it’ll be a two-year, $4.1MM agreement for Frazier and the Pelicans.

Frazier first signed with New Orleans in March after being waived in February by the Trail Blazers. He averaged 13.1 points and 7.5 assists in 16 games with the Pelicans. He has also played briefly for the Sixers during his two years in the NBA.

Frazier is expected to serve as a backup to Jrue Holiday, who is entering the final year of his contract.