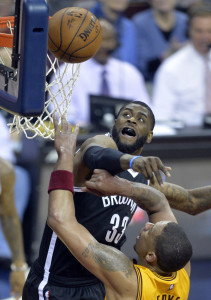 6:41pm: Reed has agreed to a two-year minimum-salary deal with Miami, tweets Michael Scotto of Sheridan Hoops. The contract includes a player option for the second year.

6:29pm: After a flurry of moves today, the Heat could add power forward Willie Reed to their roster by Monday, tweets Ira Winderman of The Sun-Sentinel. Reed would bring Miami’s roster to the 15-player limit,but partial guarantees would provide some flexibility (Twitter link).

The 26-year-old saw his first NBA action this season with Brooklyn, averaging 4.7 points and 3.1 rebounds in 39 games. Reed wasn’t taken out of St. Louis in the 2011 draft and spent four years playing overseas and in the D-League before getting a chance with Brooklyn.