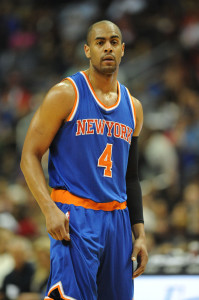 2:02pm: The Kings and unrestricted free agent shooting guard Arron Afflalo have agreed to a deal that will land him in Sacramento, Adrian Wojnarowski of The Vertical reports (Twitter link). It’s going to be a two-year, $25MM pact for Afflalo, Wojnarowski adds.

There wasn’t much chatter attached to Afflalo prior to this deal coming together. The veteran opted out of his contract with the Knicks and the $8MM he was slated to earn in 2016/17, and the move has paid off with Afflalo increasing his annual salary to $12.5MM courtesy of Sacramento. One would assume he is joining the Kings as a starter, given his reported disdain for the reserve role the Knicks placed him in last season. Though, a $4.5MM per season raise may make coming off the bench more palatable, if that is to be his role.