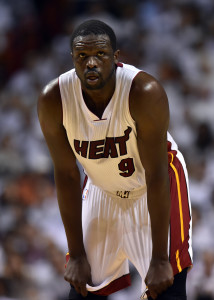 JULY 7th, 7:20pm: The signing is official, the Lakers announced.

JULY 2nd, 8:10am: The Lakers continue to add veterans to their roster, with the latest addition set to be small forward Luol Deng, who has agreed to a deal with the team, Shams Charania of The Vertical reports (via Twitter). It will be a four-year, $72MM pact for the 12-year veteran, Charania relays. Landing an annual salary of $18MM is certainly a significant improvement over the $12MM projection for Deng’s next deal that was bandied about in May.

Deng was reportedly in high-demand around the league, with the Timberwolves, Celtics, Heat, Wizards, Clippers and Jazz all said to have interest in the veteran two-way forward. Utah was expected to be “very aggressive” in its pursuit of Deng, according to a report by Adrian Wojnarowski of The Vertical, but the Jazz missed out on the veteran, who likely saw the opportunity to start in Los Angeles as the more preferable situation to a reserve role in Utah.

The 31-year-old has been a consistent contributor throughout his tenure in the league. Deng made 74 appearances for Miami this past season and averaged 12.3 points, 6.0 rebounds and 1.9 assists in 32.4 minutes per outing. His shooting numbers on the year were .455/.344/.755. Deng is a hustle player who plays solid defense and his veteran presence should be a welcome addition to the young Lakers locker room, especially given the reported discord of last season resulting from the D’Angelo Russell/Nick Young video incident.